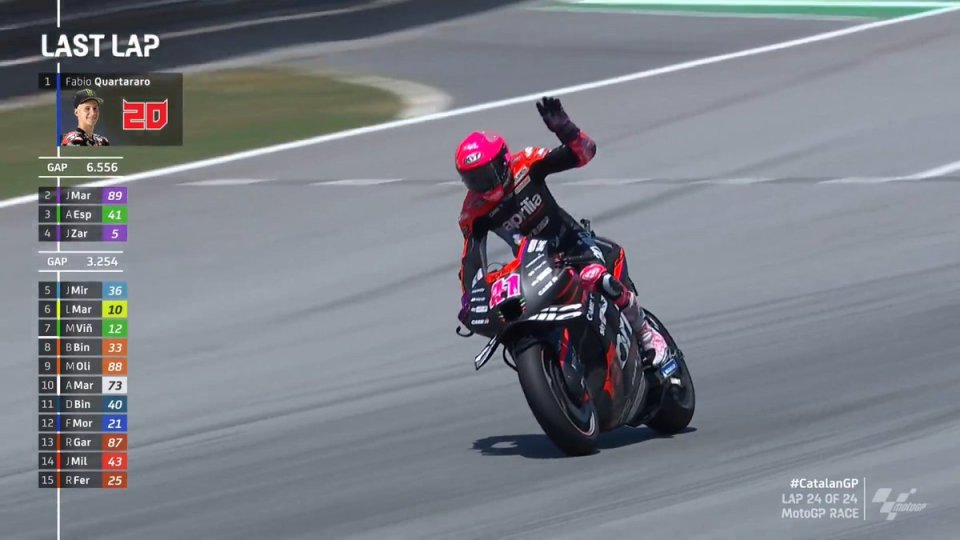 It is not our intention to rub it in, let alone stick our finger in the wound, because perhaps he has already thought of sprinkling his head with ashes but we have to admit that Aleix’s mistake in his home race in Barcelona was without a shadow of doubt a big clanger.

With one lap remaining until the end of the race, the Aprilia rider closed the gas, thinking the GP was over. Instead, there was still one lap remaining. Moral of the story: from second the Noale rider finished fifth, missing out on a podium that was virtually in the bag.

"The only thing I can say is sorry to my whole team - said Aleix - what happened is completely my fault, since this is a mistake that is not admittable in MotoGP."

The Spaniard then explained what had happened.

“I thought the race was over because the Barcelona tower has a different lap timing than the other tracks. On the other tracks, when there is a lap missing, it says L1, while here L0. I was pushing to the limit, so I just watched the gap to Martin – 0.6s – and to watch the laps I watched the timing tower. So, I did one lap and then I didn’t remember that here in Barcelona the last lap is number zero, not one.”

Espargarò’s disappointment was plain for all to see…

“This was a second place in front of my home crowd. Sorry, the only thing I can say is sorry, it’s a mistake that is not admittable at this category. Rivola initially thought I had broken the engine, but the problem was something else. At the end of the race Massimo then came to console me. There is a lot of regret, even if in the end we lost only nine points ".

Error aside, we then talked about the race.

“Yesterday, between Michelin and my team everybody put a lot of worry into my body by saying I use the tyre a lot, that I had to be gentle on the first laps and I was too gentle because at the end of the race when I overtook Martin, I had rubber enough to put in 1m41.5s and go away. I think Fabio was not faster than me, but he was smarter, he was able to push at the beginning but then it’s impossible at the end to recover 2.5s to Fabio. But I think I could go with him at the beginning, but anyway it’s like this. I will go to Germany with the aim of fighting for the victory. In the end, Barcelona remains a positive weekend, where we were strong”.