He struggled, dealing with pain, on a track unfamiliar to him. Danilo Petrucci gritted his teeth, missing success in Race 1 at Road America by just 15 thousandths. In fact, in the sprint Mathew Scholtz managed to get the better of the Terni rider, who was forced to console himself with second place.

A race where there was no shortage of twists and turns starting from the start, where Petrux and Gagne were both missing the apex. Danilo got away by re-entering in fifth position, while the American ended up on the ground, re-entering last.

Thus, Petersen was leading the race, but his Yamaha saw fit to leave him stranded at the most beautiful moment. The challenge for victory became an affair between Mathew Scholtz and Danilo. The Ducati standard bearer tried hard to spoil the party for the Yamaha bearer, but by only 15 thousandths the latter got the better of it.

A success that weighs that of Scholtz, so much so as to rise to the lead in the Championship standings by a single point against Petrucci. Closing the podium instead is Barbera's BMW, followed by that of PJ Jacobsen. Fifth instead was Gagne, able to recover with his R1 from the last position after a long run during the first lap. 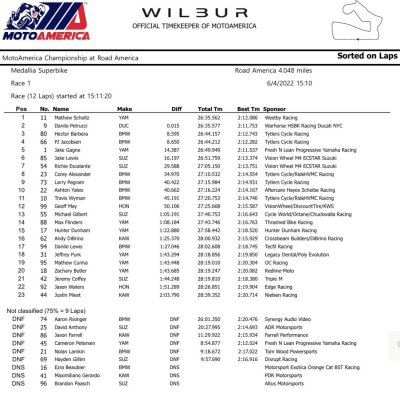