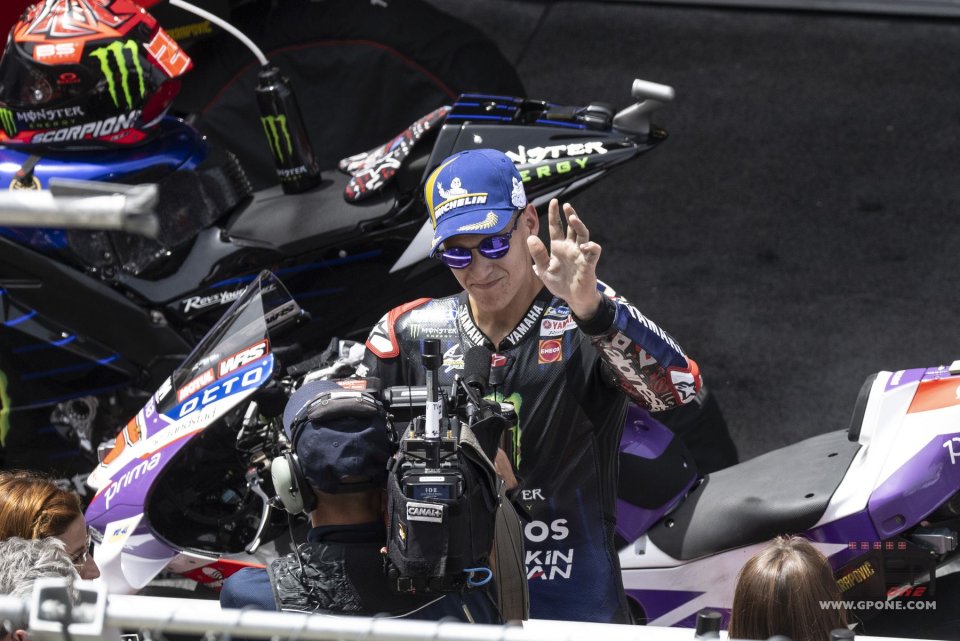 Fabio Quartararo is a real lifeline for Yamaha and in qualifying for the Catalan Grand Prix at Barcelona he demonstrated it once again, grabbing a front row that seemed almost impossible to reach given the very strong competition from Aprilia and Ducati at Montmelò. The long straight is certainly not favourable to Fabio's Yamaha M1, but as on many occasions this season, he was able to overturn the situation, proving that he is also in the fight for the victory tomorrow.

It is in fact precisely on the race pace that Fabio makes an impression, considering that he was practically the only one to replicate what was shown by Aleix Espargarò, particularly inspired in his home GP and ready to conquer the second win of the season for Aprilia after the one in Argentina. Quartararo started this weekend with the announcement of the extension of his contract with the Iwata manufacturer for the next two seasons. After now eliminating all the variables regarding his future, he will be totally focused on a present that still sees him as the leader of the world championship with a precious lead of eight points over Espargarò.

"Yesterday was difficult, I didn't have any confidence with the new tyres - said Quartararo - this morning I also didn't have a great pace and honestly I didn't expect to be so fast so soon. But I felt very good in FP4, I did some excellent laps. In qualifying I gave my best, maybe I would never have been able to fight for pole or even for second place, but I'm happy with how it went and I think I'll be ready tomorrow. Maybe I could have done a little more in qualifying, but I'm happy with that".

You didn't take pole, but you feel ready to fight tomorrow.

"We have the potential and the speed, even if we are not the only ones. Everyone knows how critical the situation is here for the tyres at the end of the race, but we are all prepared. I think everyone has a very clear idea of ​​how to manage this situation. ".

Marini said that in his opinion the problem tomorrow could be more the front than the rear. What do you think?

"For me, the front tyre is ok. I have tried both the medium and hard, and I don't think we will have any problems. It will be a matter of having a strategy in the race, decide when to push more or less, but I really don’t think the problem will be the front in the race ".

You said you felt good right away today. What changed from yesterday?

"Yesterday I felt good with the bike, but I didn't have any grip. I just think we changed a few small things on the bike that helped us, but I think the step forward depends more on the greater grip of the asphalt there was today. I don't think I made any big changes, it wasn't this that made me take a big step forward. "