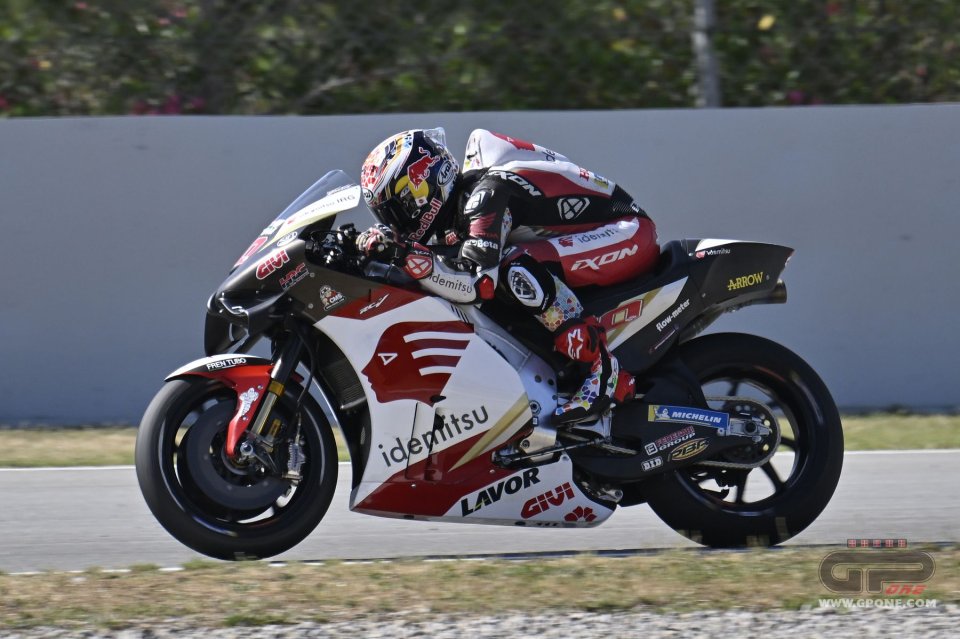 Taka Nakagami ended up having to bear a rather heavy load. Marc Marquez’s absence in Barcelona, and other Grand Prixs from here to an uncertain date, has placed Honda in the position of having to choose another rider to whom to entrust the development work for the components that Marc was testing during the race weekends.

With Pol Espargarò and Alex Marquez equally uncertain of being able to stay in LCR, the Japanese rider appeared the most obvious choice. Nakagami is also at risk, since he’s not necessarily reconfirmed for next season. But probably, among the three riders taken into consideration by Honda, he’s also the one who has the least chance elsewhere in the MotoGP, representing a potential source of information for several rivals. From here, the choice to entrust him with the frame and a rear swingarm previously tested by Marquez for Barcelona. Today, the Japanese rider ended the day in 12th position, just behind Pol Espargarò.

"Our basic set-up isn’t bad," Nakagami said. "As always, we have grip problems in the back, but it’s a classic on this track. This is the main problem every year, and it’s also the case this year. Now I’ll have to check all the data to see if we can find some solutions, working to be able to use these new pieces. Otherwise, I'll go back and maybe try them again on Monday. I'm not sure I'll use them again."

What do you think about these new pieces?
”I didn’t feel any positive sensations with the new details. Honestly, I would’ve expected to feel more grip, especially when the bike is leaning. But I didn’t. Maybe the conditions of the asphalt affected the situation. I don’t know. But I can't define the sensations I had today on the bike. I’m not sure about it. I didn't feel anything negative, but the potential is very similar to what I had with the standard bike."

Not even changes in the behavior of the bike?
"There are some differences in braking. The bike is stiffer and, on the rear, it almost seems to push more, making it harder to stop the bike. If I felt a high level of grip in exchange for this problem, I would accept it and use these details. But I don't feel positive aspects. Even in braking, there are good things and things that aren’t. But I repeat, the conditions make things difficult to understand. I can't say what works and what doesn't."

Maybe you expected to be faster right away.
"I honestly expected to be a lot faster with these details, maybe two or three tenths. But, in the end, the lap time remained the same. The bike drifts very much the same way. Let's see tomorrow morning. We should find better conditions, and I’ll try to push to stay in the top ten."

The other Honda riders are also far from the top.
"This afternoon, the conditions weren't the best. Aleix with Aprilia was very fast, as was Maverick. But, actually, if we remove the two Aprilias, we’re all close. The times are very similar. But, again this afternoon, I didn’t feel so confident on the bike, especially in mid-corner and exiting. We need to find a solution because, otherwise, it’ll be difficult to find a good race pace, and qualifications will also be a problem. Staying like this is not good at all. We all know how important qualifications are in the modern MotoGP."