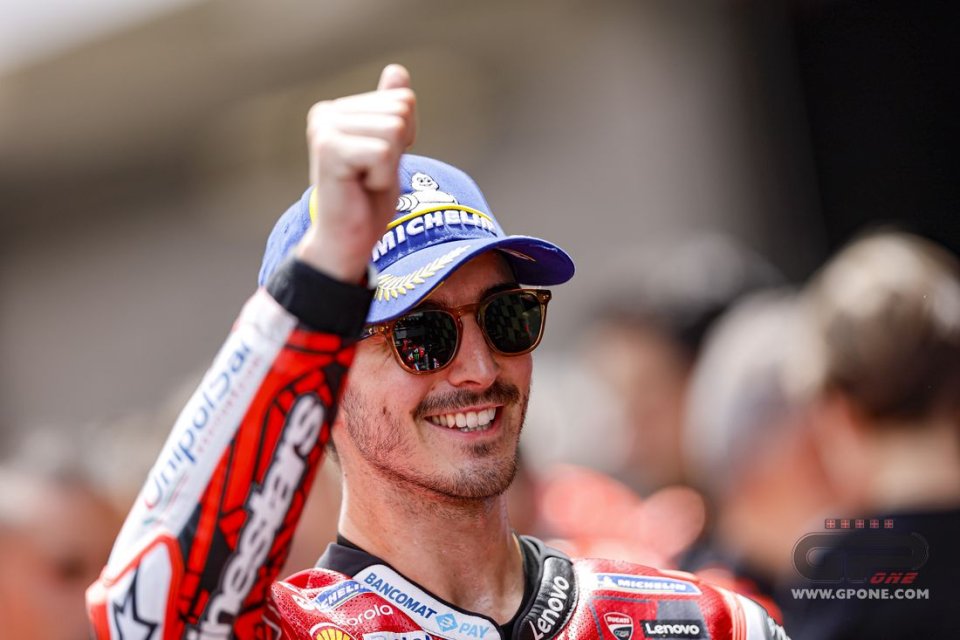 Aleix Espargarò in pole position, Fabio Quartararo third, and Pecco Bagnaia in the middle: the front row of the Barcelona GP boasts the three best riders of the moment, those who have shared the steps of the podium at Mugello. With a struggling Bastianini, they could be battling for the victory tomorrow. At a press conference, they laughed and joked with each other, seeming more like friends than rivals.

"Mutual respect is the basis of a healthy rivalry,” Pecco emphasized. “But this doesn’t change anything on the track. When we’re racing, we really battle it out, but respecting each other. We all have the same goal, that of winning. And, when we have to aggressively overtake, no one backs down."

Will it be like this tomorrow?
"Aleix, Fabio, and I are the three fastest, and I think my pace is close to that of Espargarò’s. In the FP4, we worked differently. He started with a new tire, I with one that already had thirteen laps on it, and I took it beyond the race distance."

You lost the pole position by 31 thousandths of a second.
"I’m also very happy with the good work done. In the FP4, we slightly changed my set-up, and that gave me confidence, even in the flying lap. It wasn’t easy to have a perfect one. Every mistake cost precious tenths, but I was close to the pole. This weekend, Aleix is even faster than usual, but I managed, round after round, to get closer to him, as did Fabi did."

How can you beat him in the race?
"I don't know. The key tomorrow will be to be smart in rear tire management. You can be fast in the first laps but, in doing so, you can’t be consistent in the last laps. It’ll be a race for survival, but I did a different job these days than usual, in order to understand if the tires will hold, and now I’m happy."

Will you be racing on egg shells?
"In this heat, it's important to stay in front, but you can't push all the time. You have to manage. Not to mention that the choice of the rear tire will be crucial. I haven’t decided yet, but my ideas are  quite clear."

Is it harder mentally to face a race like this?
"Truthfully, you give everything you have anyway. The difference is that you do it in management. You still have to push to not find anyone behind you in the last laps, it would be a great annoyance, especially in this track where the trail makes the difference. In the end, it’ll be a difficult race like the others."

It’s now practically certain that Miller will be leaving Ducati at the end of the season. Who would you like to have as a new teammate?
"I like Jack because together, in the garage, we form a group, and that's what I need and want. We’ve been teammates since 2019 and, from the beginning, we’ve worked together. We talk a lot during the weekend. I’d like to have the same relationship with the rider that will arrive, so that we can both improve. I'm sure that’s what will happen. I also want to wish Jack all the best for his future.”