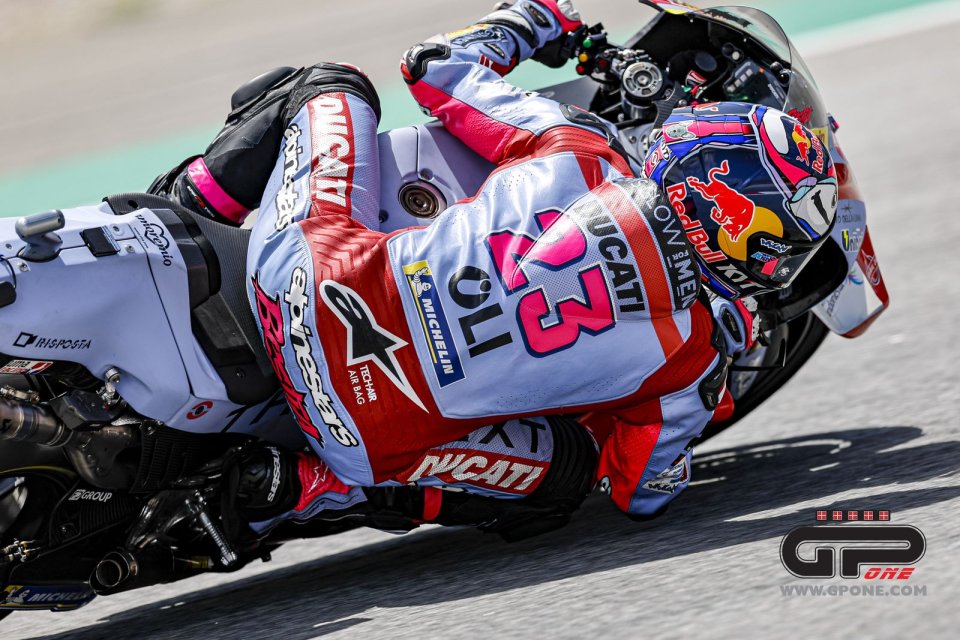 After a DNF at Mugello, Barcelona is an excellent track for Bastianini. The lack of grip causes rapid tyre drop and his ability to be kind to the tyres could come in handy in the decisive laps.

Enea's favourite, however, is Aleix, who showed a pace and a speed on the flying lap higher than everyone else, confirming his harmony with the Noale manufacturer’s RS-GP. For the Gresini team rider they are the favourites for the victory at Montmelò, but we are only on the first day.

"The grip today was terrible but you have to adapt, because it won't change for this year. Today went well. In FP1 I was fast, in FP2 with the hard behind I wasn't as fast, tomorrow I'll try it again. In the fastest lap I was still fast, so I'm happy”.

Are you undecided between the medium and the hard for the race?

"Yes, the hard is very good at the beginning, but after only 4 laps it drops. The others with the medium have fewer problems, so I think it is the best choice ".

Is the FP4 important, despite the difference in temperature with the afternoon?

“Yes it is usually important for the race, but this time I didn't do many laps with a tyre because I wanted to compare the medium and the hard. In this circuit the drop in tyres is very pronounced”.

How are you doing for the flying lap?

"I think the time attack is not the problem here, the pace worries me more".

How do you judge your race pace and the Ducati?

"The Ducatis are always very strong on lap time, but on the pace there are those who are in better shape than us, especially in the afternoon".

Did you expect Aprilia to be so strong?

"Yes, it is a very Aprilia track, but above all a track for Aleix who doesn’t have much lean and seems to have a very nimble bike".

What do you think of Quartararo in apparent difficulty?

"I think he'll come out, I don't think he’ll be on Aleix's level, but I think he's good enough for the podium"

Here you said that you should adapt your riding style, also to improve the problems in corner entry that you said you had in the last few races.

“Yes and no, the second no, the first yes. I don't ride like I should ride a MotoGP here, last year I struggled a lot and I'm still not in good shape. It is difficult to get the best out of corner entry here "

Do you think the fact that Aleix is ​​so competitive at home for the first time is enough to make up for the performance gap with Ducati?

“I think if we were to race now, he would win easily. But we are only on Friday and everyone can still improve”.