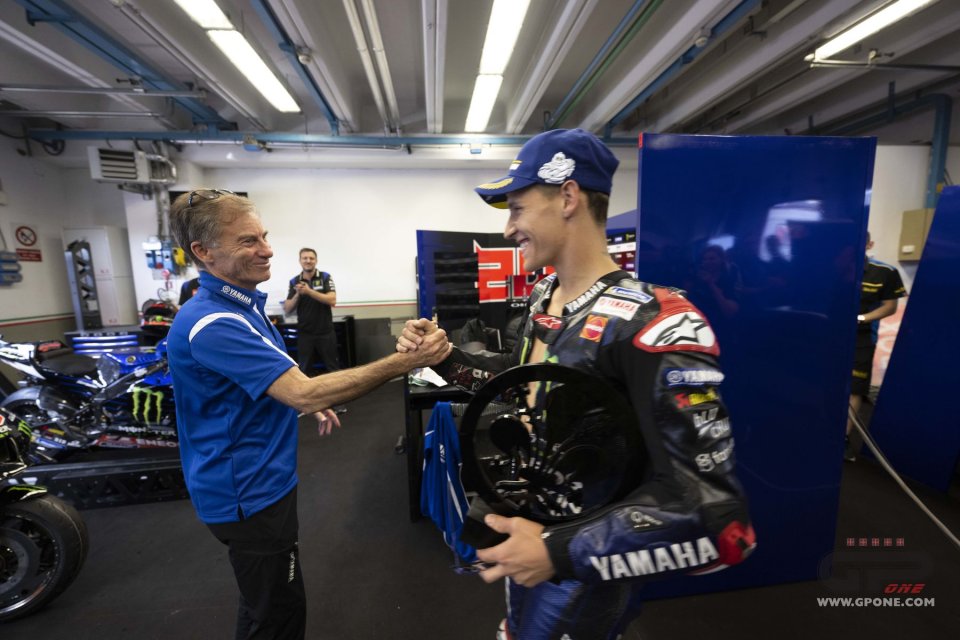 Fabio Quartararo has signed the contract that binds him to Yamaha for another two seasons, confirming a winning combination that saw the Frenchman take his first steps in MotoGP and become champion in 2021, on his third attempt. It was probably a negotiation that lasted longer than it should have, with Fabio being put forward for various possibilities, including becoming Marquez's partner for a real Dream Team.

It's a story that could not have had a different ending, because although the M1 has shown itself behind some rivals, it remains true that Fabio is the only one to squeeze its potential at 100%. To keep him on the Yamaha, Iwata decided to invest with a presumably richer contract than the current one and above all with the promise of a project built around the requests of the Frenchman, who has been repeating the same thing for months, namely that the M1 only needs horsepower.

"It wasn’t an easy decision, it took us longer than usual to evaluate the whole project - said Fabio at the press conference - Yamaha is working hard to bring more people into the project, they know where we need to improve. In some seasons we improved in some areas, then others again. Now they know perfectly well what it takes, the key is power. I am very happy because I know they will do their best to solve this problem and I believe in this project, so I made the decision to stay. I wouldn’t say it was days ago, but a few weeks ago ".

What convinced you to choose Yamaha?

"My first need is to have the best bike and the best project available. They convinced me because they have hired some new people and they know where to improve. In the past they have always worked on different areas, but perhaps they had never fully accepted that the bike was slower than the others. Now they know it and they will work on this weak point. That's why I decided to stay with Yamaha. "

It wasn't a quick choice.

"As you can imagine, I wasn't just talking to Yamaha and it took me a long time to decide because at a certain point my head was going in a different direction. Then after a few days towards another. It was a bit difficult. I think the fact that I have so many engineers working on the engine and at the same time seeing the results I'm doing now makes me think that I couldn't have done more. We just need power, for the rest I feel good on the bike ".

Here you have always been fast, do you think you are the favourite on Sunday?

"Last year was a strange weekend, but I've always felt good here. I did my first podium here in MotoGP, last year I was very fast here, so I see no reason not to think I can be very fast here. There is a long straight, but there is also at Mugello and I was second. Maybe here I will feel even better and try to go even better than Mugello. "

How come in your career you have always been so fast here?

"Honestly, I remember that I have always been fast here, even when I was in the CEV I used to ride with the times of the world championship. I like it a lot and especially with MotoGP I was always very fast, maybe it suits my style well. Then the last corners both suit my bike and my style, so I think that's why I'm always really fast here. "

In Yamaha have they already shown you something on the new engine?

"No, of course I haven’t seen anything on the engine, it's too early. The people who will arrive for the M1 MotoGP are already in Yamaha. I have to be honest and admit that I don't need who knows what on the bike, everyone is asking for more grip, more speed. But realistically, we only lack top speed. That's why they made the decision to move more people to the development of the engine, many engineers. They will be focused on that. "