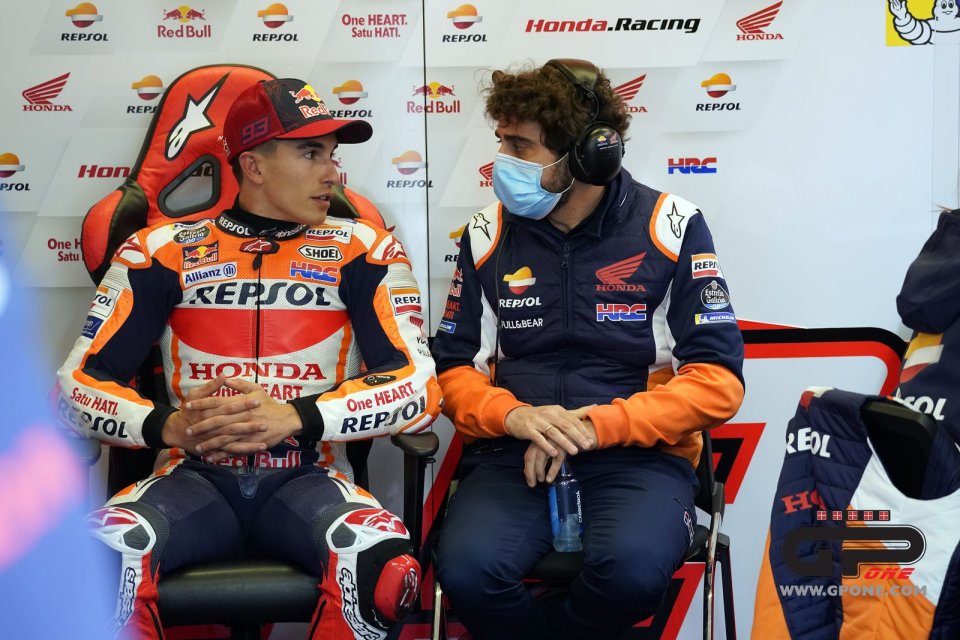 While Marquez is in a clinic in the United States to undergo the fourth operation on the humerus of his right arm, there is another 'right arm', inside his box, cheering for him and waiting for him: it is Santi Hernandez, his chief engineer, who has been at his side since the beginning of the career of the atomic ant.

Santi knows perfectly both the physical and technical situation of the Marquez-Honda pairing, and his words as reported by AS are pure gold.

“There is no Honda up front. We have to be critical of ourselves. We need to improve the bike, but it is also true that Marc has not been at one hundred percent and with him at his best the results might have been different, but right now we have to improve many aspects of the bike and try to understand what happens when he comes back and give him the bike he deserves. There are many unknown aspects. We can talk about many things, but those of us who experienced it from the inside know that he did not have a good time, and that with the limits he had, you have to take your hat off for the results he obtained, even if you don't see them much because you don't end up winning or on the podium. You have to take off your hat for what he was doing and, now that he said what he was going through, even more ”.

Santi referred to Marc's results: 6th in Austin after a great comeback and 4th in Jerez. All this after basically missing 13 races in 2020, four in 2021 and two this year.

The reality is that Marc was waiting for this moment, the moment when the doctors would tell him that he could have the operation again. He expected it and feared it, but since passion is stronger than everything else, as soon as he was given the green light, Marquez left. He couldn't do otherwise.

“With a problem like his you can’t ride as you want, it doesn't allow you to use the strength you want. Since you cannot do the movements you want, you get tired more, it is harder to change direction and brake. If you don't feel good enough to be able to stop the bike where you want, the limit is very difficult to reach ”.

From tomorrow Hernandez will have HRC test rider Stefan Bradl, the former Moto2 champion, in the garage.

“This is not a new situation for us. We have experienced this several times since 2020. Stefan doesn't have the racing speed right now, but as the season progresses he will recover it, as he did two years ago, finishing in the top ten at the end of the season. We will have to try to be fast and work with Honda to develop the bike. It is important to have the test rider to test the things we need. What worries me the most now, however, is that Marc is being operated on and that everything is fine, so that he can have fun again when he gets on the bike ”.