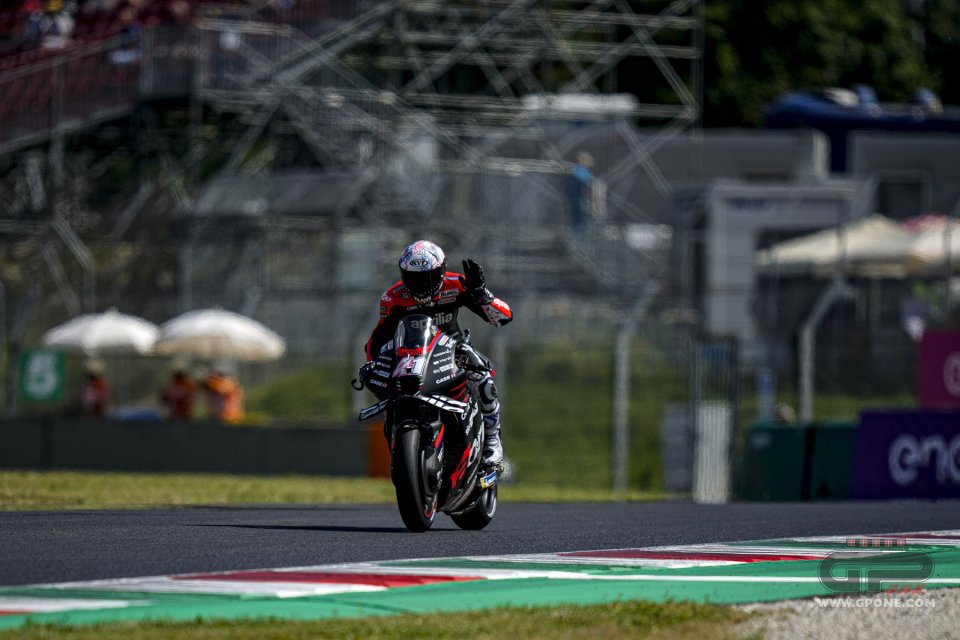 Aleix Espargarò managed to carry on the long-standing podium theory, with a third place won at Mugello, thanks to his stubbornness and a really impeccable race. Taking off from a seventh position, the Aprilia rider had a great pace in the warm-up, but the first laps were decisive in excluding him from the fight for the victory.

Espargarò tried to get the better of the small group of riders that preceded him, but he lost too much time with Bezzecchi and Marini to hope to remain attached to Fabio Quartararo’s  tail and plausibly also Pecco Bagnaia’s. Strange to say, as we speak of the podium, but this third place has undoubtedly left a bitter taste in Aleix's mouth, since he knows he’s lost the chance to gain something more. The consolation is Barcelona, his home track and a great opportunity for revenge.

"I'm happy. It's been a great weekend," Aleix said. "It's a shame I didn't qualify better yesterday. I knew it would be hard to get through today. The guys in the VR46 were really good. Without much experience, they never made mistakes, and I wasted time with them, and this took me away from the possibility of fighting for the victory. I thought they'd do something wrong at some point, but they didn't. There were many people in our garage today from the Piaggio Group. I hope they had fun!"

You and Aprilia have grown a lot. Do you think it's mainly because of you?
”I think Aprilia without me wouldn’t have achieved these results but, at the same time, I think that I wouldn’t have been so strong without Aprilia. It's not just one person, it's a team. It's an individual sport, but it's a mix of everyone's work. We have great sensations in the garage. We’re doing a great job. Maybe it's too soon to say, but I think I can fight for the title until the end. It's nice to see the other riders starting to see me in a different way, but that's not going to change my approach. I have my own path to follow, and I’ll try to fight as far as Valencia."

At this point, do you think that you, Pecco, and Fabio are the favorites for the World Championship?
"It's nice to see that we have three different styles, three different bikes, but we’re always ahead in each session. I'd say that, at the moment, Pecco, Fabio, and I are the three contenders for the title, but we have to continue to reason, race after race, because the negative moments come suddenly. In the first part of the season, we were the most consistent."

There were some good duels today.
"I did lots of passes. I passed Zarco and also Marini and Bezzecchi. I had fun with Fabio too. We always talk about how difficult it is to pass, but we have to remember that the level of the riders now is incredible. We think about electronics, devices, and aerodynamics, but we forget about these things. The point is that everybody's braking very late, they're all fast, and I think that's why it's hard to pass. The current level of the MotoGP is very high. I had a really good time. I think it was a great show today. Maybe if we had started ahead - Pecco, Fabio, and I - there would have been less overtaking because we had a very similar pace, and Mugello helps."

Are you happier with the podium or disappointed with a potential win that fell through?
"I wanted to win, but a podium is more than fine. Mugello is always difficult against the Ducati. I wanted to close the gap in the ranking on Fabio today, but he was really fast. My engine today was great, better than Fabio's, and I think I can close the gap in my home GP next week. I'll try to win in Barcelona, maybe even get on the podium. I’m having a great time. I know that it’ll be the most exciting home GP of my career in Barcelona. I’m fighting for the title. The track is good for my bike. I’ll have fun fighting it out in front of my fans, and I’ll try to put pressure on Fabio."

THE 2023 CALENDAR The Suzuka 8 Hours, valid for the FIM World Endurance Championship, will take place in 2023 one week later than originally planned...
43 min 9 sec ago

The FS-3 Racing Kawasaki team continues to focus on young riders in the British Superbike. With Rory Skinner in the Moto2 World Championship, 19-year...
10 hours 54 min ago

His wife posted about his condition: “He is okay and in the best place possible. They will keep him in for a few days to monitor him.”
20 hours 5 min ago

Peter Oettl merges with Intact GP. The Swedish brand Husqvarna will race in Moto2 with Darryn Binder and Lukas Tulovic and in Moto3 with Ayumu Sasaki...
2 days 24 min ago