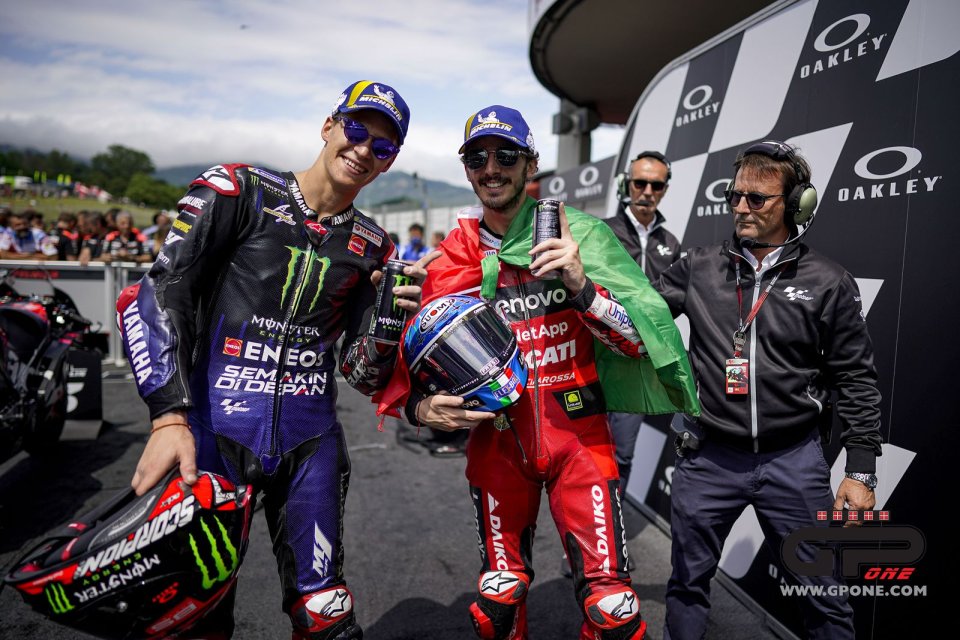 Despite a below-par qualifying, at Mugello Fabio Quartararo made his way with conviction amidst the Ducati tidal wave and scored a precious second place behind the Ducati of Bagnaia. Twenty points that maintain the advantage of the French rider in the standings, however, closely followed by Aleix Espargarò (Aprilia), again on the podium and second in the standings. Bagnaia made up ground in the standings but the Frenchman's advantage is still solid, while Bastianini, despite high expectations, sank into the gravel and let the Yamaha rider breathe a further sigh of relief.

Today it must not have been easy to fight among all the Ducatis, with the exception of Aleix's Aprilia.

"The weekend didn't start with the best feeling on the bike - Fabio told us - we tried a new fairing that should have made us gain some speed on the straight but the disadvantages were more than the advantages. In the end we decided to opt for the previous setup, losing a little in top speed but using the tow we could recover. I think it was a good choice and I am very satisfied with the result after fighting in the midst of all these Ducatis. "

It felt like your perfect race, we saw you fighting to the limit in every part of the track.

"Yes, I really had to push myself to the limit throughout the race. There was a moment when I was fighting with Bezzecchi and Marini. Marco caught me back on the straight and I started letting go of the brakes, then he started cornering and I didn't want to lose my position but the front was starting to become unstable so I had to brake. I'm satisfied with these 20 points, which are precious in view of the classification. "

You have increased your lead in the standings, what do you expect from the next race at the Catalunya circuit?

"It's a circuit that I really like, last year we were fast so I have good expectations, but this year I'll try to keep my leathers fastened!", Fabio joked, referring to his little incident in 2021.

In recent races there has been a lot of talk about the difficulty in overtaking in MotoGP and the temperature problems at the front. Why wasn't it like this here in Mugello?

"As far as I'm concerned, with my bike what I need are changes of direction. I think this circuit lends itself well to this, especially in turns 2 to 3 and 6 to 7. When I overtook Bezzecchi I was at the Arrabbiata, cornering speed counts a lot for us. Mugello therefore lends itself a lot to overtaking, in my opinion ".

You said you chose not to use the new fairing. Improvements are normally expected from new components.

"You always have expectations of course. I expected more top speed from the start of the season. The new fairing gained something in that respect but in these cases we must also consider the negative aspects, and with the team we made a choice to return to something that we already know works well. It doesn’t mean that we will not use it in the future, it is a fairing designed for straights, but it will always depend on whether or not it adapts to my riding style. "

How crucial was it to hold off the attacks of Bezzecchi and Marini in the early stages of the race for this result?

"I knew that if they passed me I would have to take them back in the first section of the track, to build an advantage, because otherwise I would have risked being overtaken again on the straight. I was surprised by how I managed the race, I made a good start but unfortunately I was on the left at the first corner and I really had to push to the limit to keep my position and defend. "

Now that we are back on the European circuits, it seems that the riders fighting for the title this year are the ones present here on the podium, what do you think?

"I think we have all ridden very well and consistently so far, but there are also other riders who can fight for the title, but at the moment we are definitely one step ahead."

This race was very similar to the one we saw in Jerez, what were the differences, did you have the chance to overtake Pecco today?

"At Jerez I knew I had no chance of catching him because our pace was similar but my front wheel was suffering a lot. Here at Mugello the temperatures were different, the front wheel was in good condition, in some sectors he gained something, in others I gained, but the difference is that here I didn't push so hard to make up ground on Pecco, as much as to keep Aleix and the other Ducatis behind me as far as possible and defend the result ".

Marc's decision to leave the championship again for another operation took everyone by surprise, did you expect that?

"I have always maintained that Marc is the best rider in MotoGP of the last ten years. The last two years have been really hard for him, after his comeback last season he managed to win three races, it's not easy in his condition. Whatever is his decision, I am on his side and I wish him to recover as soon as possible. I hope to be able to race with him again as we did in 2019".

After the last two years spent in MotoAmerica, next season Hector Barbera will return to racing in British Superbike with TAG Racing Honda
2 days 2 hours ago

The first of four episodes will be available starting January 27th, while the final episode will be released on February 7th. For now, it’ll only be...
6 days 20 hours ago

The "Sic58" bench will be placed in the town's pedestrian street, just a few meters from the church steps and the white marble curve named a few...
1 week 3 days ago