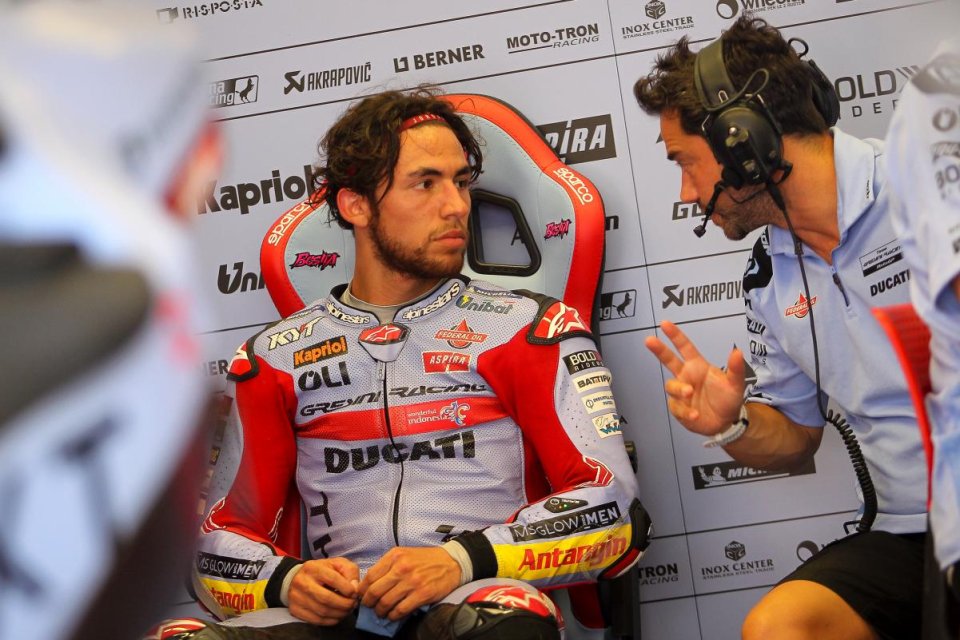 There’s lots of remorse because his race ended at a crucial point. Enea Bastianini had to swallow a bitter pill at Mugello. Despite a complicated qualification, the Gresini rider was fully recuperating, so much so that het had the podium in his crosshairs.

But, during the 14th lap, he fell, forcing him to raise a white flag. A rather important blow for the rider from Romagna, who was intent on capturing the spotlight.

"Unfortunately, it wasn’t an easy weekend,” he began. “On Saturday, the conditions were critical and, during the warm-up, it was much colder. In the race, despite the bike rearing up at the start,  I had a good pace. In fact, I was able to be fast. Unfortunately, I got sucked in by Aleix's bike. I entered the corner too fast and closed the front. I could’ve done a good job here at Mugello, but that's how it went."

Enea was really disappointed.
"When I had a clear track, I felt strong. But, when I was behind a rider, I struggled to follow my trajectories. It's hard to stay behind at Mugello, it's not easy at all. On the one hand, I feel bad. On the other, I'm happy about the potential I had, since I was close to the podium before the fall."

In the end, Mugello wasn’t a great day.
"The soft tire was the right choice. I was fast. I covered a lot of distance. The problem is that here, at Mugello, when you have someone in front of you, it's never easy. I exaggerated when I braked. I broke away as if I had no one in front of me. The fact is that, with the wings, it becomes complicated to straighten the bike."

Enea tried to disguise his disappointment, but it still showed.
"This zero weighs on morale, since I knew I could have done well. In fact, I was confident from the start, aware that Pecco had an excellent pace. It probably wouldn't have been within my reach, but the podium was. Qualification? I thought it would be easier to get back on track. Instead, we fooled around the first laps, losing contact with the front group.”

Now he’s thinking about Montmelò.
"We'll be in Barcelona in seven days. We’ll try to learn from these mistakes so as not to make them again. In the world ranking, I’m still the same, but that's not what interests me now."