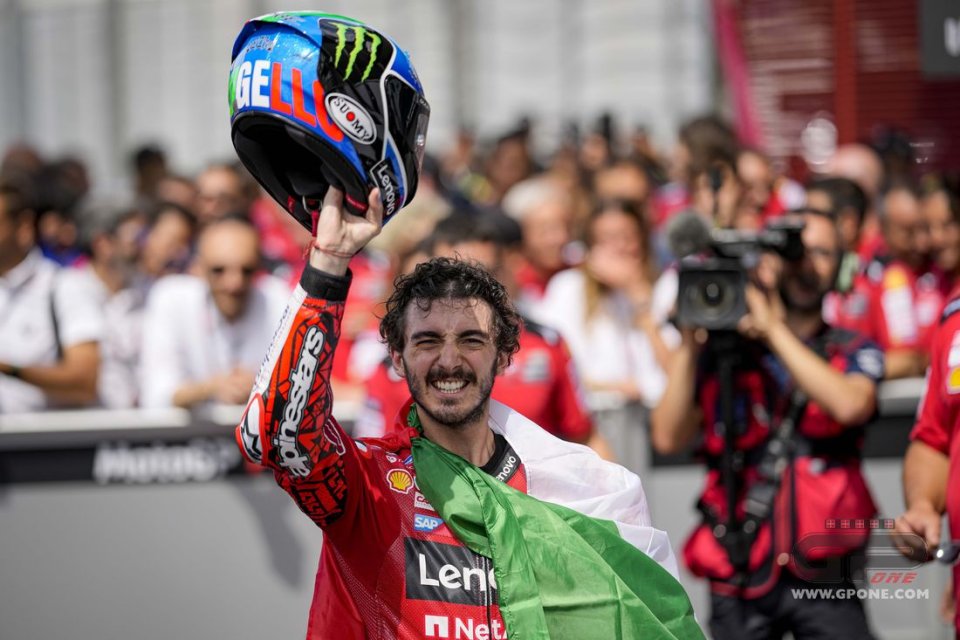 Mugello Red, the hue of Ducati and Pecco Bagnaia, winning together again and on the best track to do so. Success number 63 for the Desmosedici in the premier class, won by the rider who has the number 63 on the fairing, a sign of destiny that this time did not take away from the Italian the joy of lifting the trophy on the top step of the podium.

"It is something I had always dreamed of - Bagnaia cannot hide his joy - Winning at Mugello is incredible, Misano is my home track but this is the Italian Grand Prix, one of the most difficult circuits in the world".

Better than winning at Jerez…

“This victory is more special, at home, in front of a lot of people, my fans and Ducati, it is incredible. I'm really happy".

“I didn't get a bad start, but at the first corner I found myself between two Ducatis and I had to come off the throttle then at turn 4 Marquez touched me. So I tried to be smart and it wasn't easy with all the other riders pushing. I used the advantage of the Ducati on the straight to manage the tyres and, after passing Bezzecchi, I built up a lead”.

You, Bezzecchi and Marini are Valentino's pupils…

“It was great, I'm also very happy for the VR46 team, they worked well all weekend and were very fast. We also helped each other in different situations, I would like to fight other times with Marco and Luca in the future. We must continue like this ".

You recovered from 9th position, was it difficult?

“When you have a faster pace than the others, everything is easier, but when you have a similar pace between turbulence and wings then things get complicated. I struggled to overtake Di Giannantonio because he was pushing hard on the tyres, while I wanted to manage them ”.

Was the only flaw not finding the fans for the big occasions?

"I missed the track invasion and I missed seeing a full house, it was a shame. However, I enjoyed the victory with all the people who had my flag, there were so many and I did not expect it. I stopped on the track, there were a lot of people, I threw my gloves and boots, I wanted to do the same with the helmet but they would have penalized me (laughs). We hope that in the future we will return to a Mugello full of people, as we were used to, and that we will return to no sleep at Mugello”.

Did you feel the pressure after the crash at Le Mans?

"It was important to take points for the championship in this race, but I was not feeling more pressure. The pressure is always there, we are doing a job where you have to live with pressure. But when you are enjoying your thing, mistakes can happen. But the good thing is to restart and don’t think about your problems.  Just think about the things you enjoy and I really enjoyed this weekend a lot. It’s not always easy because sometimes you can be angry, like I was yesterday afternoon after the qualifying. But you have to be positive always and mistakes can happen.”

"Winning gives you more and more motivation, I didn't have a good start to the championship but from Portimao onwards I have always been among the first. Today I took a weight off my shoulders”.

Do you think you've become the number 1 in Ducati?

"No, because the important thing is to be a team. I look at Miller's data to improve and he does the same, that's how it works in Ducati. If Bastianini is ahead of me in the standings it is because he did a better job than me and I don't feel like his boss at all (laughs). We have the same goal and we are both fighting to achieve it ”.

So it wasn't easier to keep Quartararo behind today than Bastianini at Le Mans?

“The pressure is the same for any rider you have behind you. At Le Mans I made a mistake, going long at turn 8, and I crashed. I don't attribute the blame to the pressure of having Enea behind me, I read that the next day and I don't think it was like that ".

What do you see if you look back?

“I see that I have made mistakes, but we must never look to the past, but to the future in the positive. Today I won and I must be happy. Valentino always taught me to celebrate the victory and I will do that ”.

Do you now feel one of the favourites for the title?

“I can say that Fabio, Aleix and me are the favourites, but I have made more mistakes. I would like to put also Enea there as well.”

Why are you so cautious?

"Because in any case they are much more consistent than me, I have to become too. I hope I have learned the lesson of the last race and from now on I will try to be ”.

Can you at least say that this is a new starting point for the championship?

“I said the same thing afterwards at Jerez… and then I crashed at Le Mans (laughs). I prefer to live every weekend as it comes, we'll see how I arrive at Barcelona. Last year it was tough, but I think we can get a good result there too despite the poor grip. "