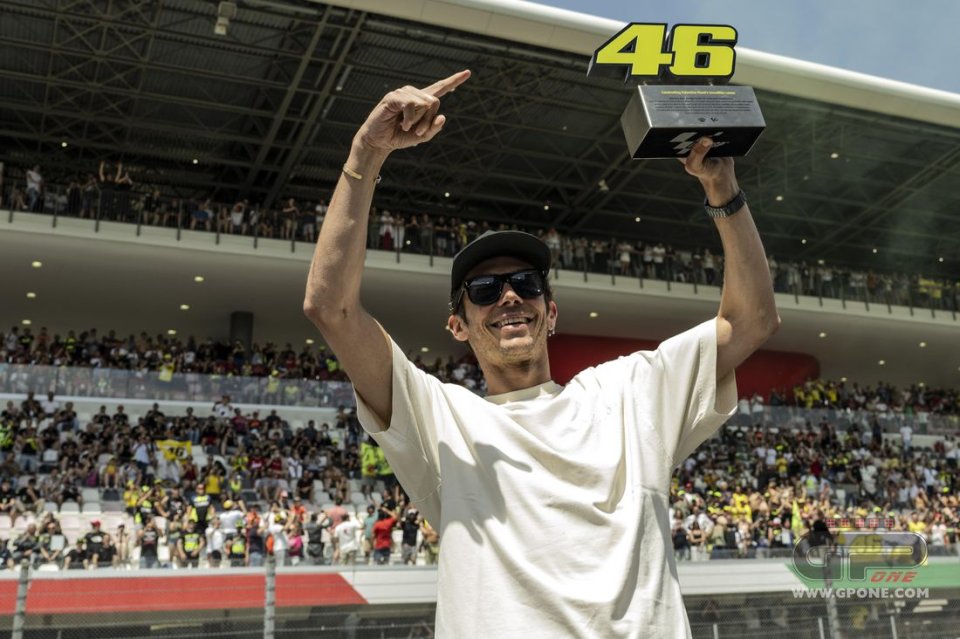 Valentino Rossi raised the (obviously yellow) #46 on the straight at Mugello. He’ll be taking it home, and no one else will be able to wear it in the MotoGP. Like when great soccer champions retire their shirts, the Doctor has been given the same honor.

Celebrating with him were his fans, but also everyone in the paddock, many riders, and his entire team.

"It’s a bunch of feelings all together. On one hand, it’s really sad that I’m done with my career and that the number forty-six is being retired from the MotoGP. On the other, it’s exciting. It was a long story and an unforgettable career made of great moments,” Valentino said. “I’m very proud, and it was great today at Mugello, my home Grand Prix. I always raced with the forty-six. That number means a lot to us. It was the one my father, Graziano, used when he finished second in the world championship in the two-fifty. It's my signature, a mark, not just a number. Unfortunately, great things end."

The #46 will no longer be on the track, but many are ready to pick up where Valentino left off.

"Italy is always at the top of the MotoGP, especially right now. There are Aprilia and Ducati and many Italian riders, such as Bastianini who won three races, and those of my Academy. Bagnaia is very fast. Marini and Bezzecchi are also fast this weekend. Then there’s Morbidelli. We can rest assured for the future that Italy will remain the star,” he said confidently.

Life has changed for Rossi now. He's a dad and a race car driver.

"I miss the MotoGP. It was my life for twenty-six years. But not too much. It was a very long and stressful period. Now I'm more relaxed. I think I retired at the right time."

VIDEO - Quartararo VS Hamilton: head to head on jetsurfing