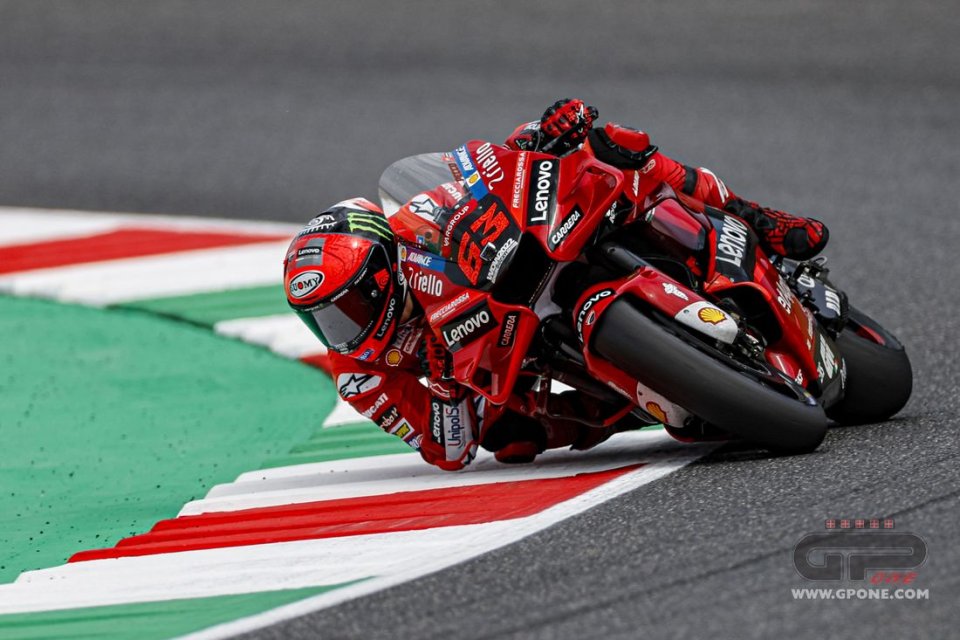 Mugello is painted red, even if there’s a dark figure in front of everyone. Aleix Espargarò has a lot of Ducatis behind him in the standings, 5 in the first 6 places, 6 in the 8, with Bagnaia being the closest. Forty-nine thousandths of a second, but Pecco doesn't care about the first place he missed by a hair.

"I'm happy because today we managed to work with the medium tire in front, although it was at the limit. Considering the heat, we had to use the hard one,"  he’s already thinking about the race, even if the weather is the biggest question.

"On Sunday, the temperatures will drop, and all this work will help us a lot,” he continued. “Instead, it seems like we'll have rain tomorrow after qualifying. That would be good. But, if it’s wet, I hope it’s already wet in the FP4, so as not to get to qualifications without knowing anything. Sunday will be more complicated. There’s more chance of rain, but not that much."

With one eye on the sky and the other on the stopwatch, he doesn't have many constants.

“It's quite difficult to make a prediction today, because everyone has tried so many different tires, due to the fact that it could rain tomorrow,”  the Ducati rider said. “ I used a medium pair, and I must say that my pace was very, very good. Fabio is having a few more problems than last year, but I think it’ll be difficult to have a race where you push and break away."

Aleix Espargarò is continuing to make a difference. That said, Bagnaia isn’t too worried about Aprilia.

"Not at the moment. I'm faster, but there’s still tomorrow, and performance will level off, also because you can't improve that much on the pace. This day was very positive, because I quickly felt comfortable. What usually happens to Yamaha and Suzuki,” was his positive view.

Like that of finding four GP22s in front of him.

“We worked a lot, and we should,” Pecco said, satisfied. “In terms of pace, however, Bastianini is faster than some GP22s at the moment. We still have to work on the pace. But  I’m happy to have been able to improve along with my team, and today we progressed even more. At the moment, I like the GP22 a lot, and we managed to get it straightened out.”

The last thing he talked about was his shoulder cam that Bagnaia wore today for the first time. He liked it so much that he’ll also use it in the race.

"It is impressive. I’m only sorry that you saw how we use the lowering device,” he smiled. “But it isn’t  a secret. Bucine is especially impressive. I didn't expect to bend that much and, above all, my chin is really very low.”