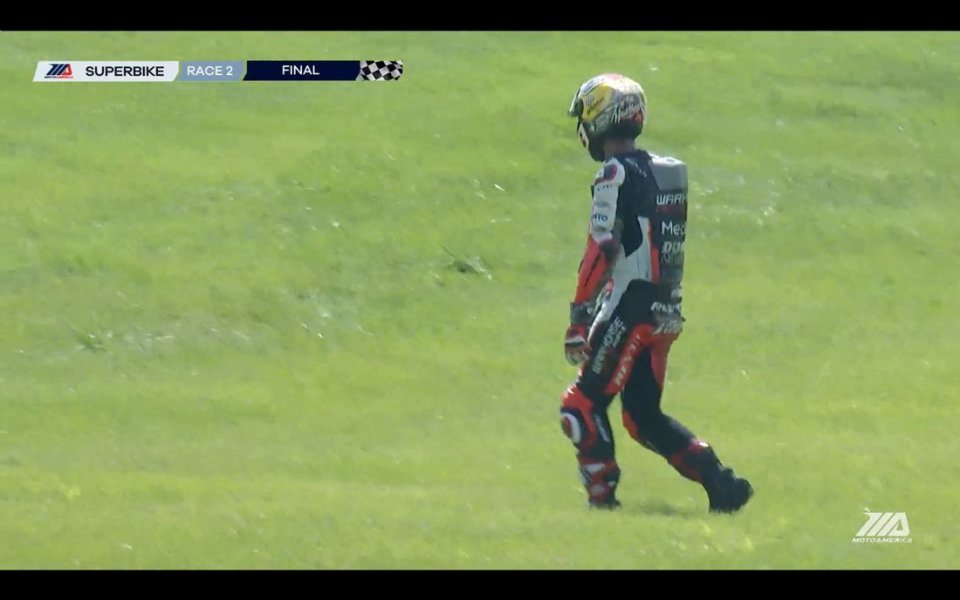 Danilo Petrucci, after his very bad accident on the straight in Race 2 at the Virginia Raceway during MotoAmerica, has returned to the subject by explaining in detail the dynamics of his crash, not hiding obvious frustration as well as concern for the total negligence and lack of organization. So he decided to put down his detailed account of the story to Twitter, also underlining its surreal implications.

"I'm not the one who likes to be involved in polemics but neither the one who accepts to read incorrect things about me. I try to be quick in my explanation: Virginia Raceway has a finish line in the middle of a sixth gear blind corner, with our superbikes means at 300 km / h. In the last lap I tried to take the slipstream of Scholtz for passing him under the finish line, but him RIGHTFULLY defend his position, so I moved myself on his outside. So the corner for me was even narrow. Under the finish line I needed to bend more my bike and I lost the contact with front wheel at 280 km / h. I crashed alongside the track hitting some sponsor panels alongside the track. One of them opened my right boot cutting my skin and broke my fibula. I have multiple abrasions and a big hematoma in my left arm. I rolled for over 100 meters almost reaching the first corner of the track. As I told you I was alongside the track, close to my bike. Fortunately I was always conscious and I remember everything, and first of all I was happy to survive and escape to a 280 km / h crash. I don't know if anyone reading these words has ever crashed at such an high speed. I was lying down, face to the ground trying to breathe as much air as possible, waiting for someone to come for at least check my conditions, so after a while I had a look around: in a side there was the track with bikes coming, in the other side a big field with anyone on it. I understood I was bleeding from many parts of my body and pain all around. So, being alone in a middle of a grass field, I got up and decided to go in a safer place, I crossed the track and by walk I went through the paddock, while a service guy with a side-by-side vehicle coming towards me to pick me up and bring me to the medical center. There I discovered that NO ONE saw me crashing because there aren’t safety cameras and using the words of the medical director "I was looking at the TV and there was no show about your accident". I remember, an accident occurred on the finish line" concluded the Italian driver.