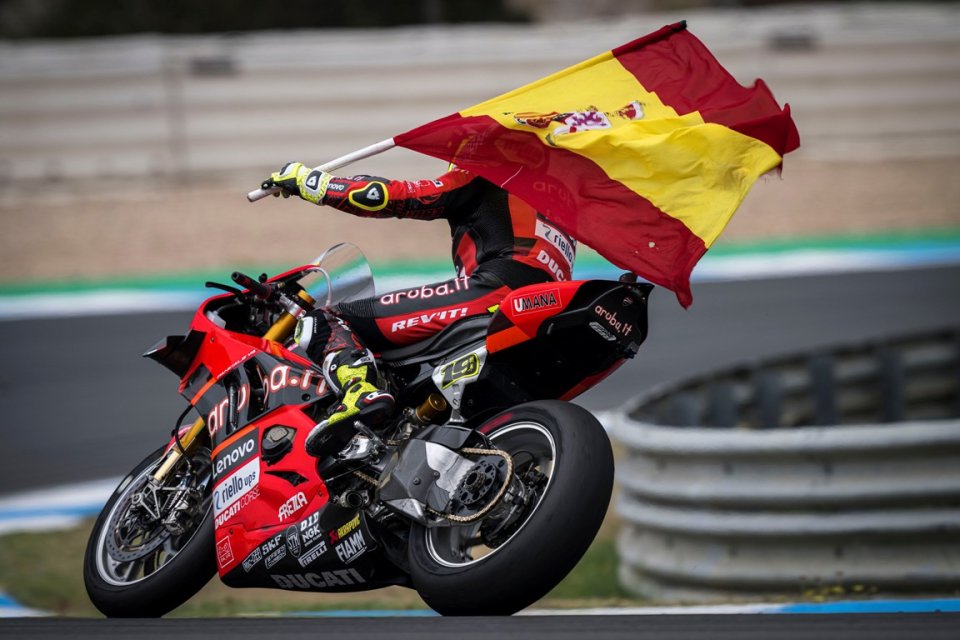 He has long hoped to reach a double win in the long races at the Autodromo do Estoril, but Alvaro Bautista had to surrender to Jonathan Rea's excess of power. He was just a few meters away from the finish line for his dream to become a reality, but the Cannibal got the better of him, passing him at the hairpin and relegating the Aruba.it Ducati Racing Team’s rider from Spain to second place.

"Because of the pass, I was forced to raise the bike, going off trajectory. I tried to fix it later, but I realized that I wasn’t going to win. I had prepared for the counterattack after his first pass at turn seven. In fact, I did. I knew he'd try the chicane again. I then tried to close him, leaving him just a few meters of space, but he still managed to put the bike in. Unfortunately, it’s not easy to defend oneself at that point because the room for maneuvering is limited. I'm happy because the position is still good, and I had better feelings than this morning."

During the race, you changed your modus operandi several times.

"Initially, I preferred to be conservative and understand the real state of the asphalt and whether it was going to rain or not. Round after round, I gained more confidence and, when he ended up in front, I knew I had tenths in the bag. So I pushed, but without exaggerating, until the duel with Jonathan."

In return, in the middle of a straight, your Panigale V4-R bucked like an angry bull ...

“On the straight, it's easily noticeable, but you can't see what I see in the rest of the lap. On the stretch from turn eight to eleven, I was wasting a lot of time on Toprak. We know we have to deal with this limit. Even if someone might say that the rider isn’t capable and that he wins thanks to the power of the engine, it’s not a problem at all for me, because I know the truth. We need to improve, like in mid-corner and in changes of direction, in order to have a precise and agile motion, but we’re aware of our strengths and where we can be faster than the competition."

Overall, what is your assessment of the Estoril circuit, based on the technical package at your disposal?

"I had never raced with Ducati. In the recent past, I managed some victories here. This weekend, both Jonathan and Toprak proved to be very strong and, probably, in hindsight, I consider it a track that’s not exactly favorable to us. In any case, we didn't do badly, but I think it suits them better."

At this time of the season, you’re making a difference at Ducati, especially for your teammate. Can you explain?

"The first tests I do in the garage are obviously with my teammate, Michael. We use the same identical material. I'm not sure about the other Ducatis but, I must admit, it's strange to see him so far back. Michael is very performing in terms of speed, but his problems all occur over a long distance while, during the tests, the difference between the two of us isn’t so abysmal. I remain focused on myself, working mainly from a race perspective, without obsessively looking for the perfect lap. Michael, on the other hand, is totally the opposite."