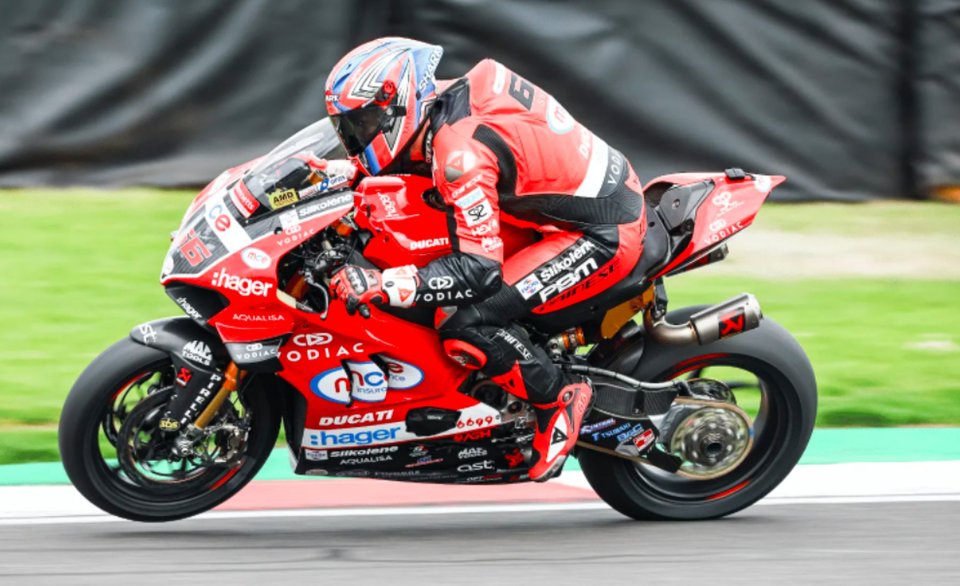 Tom Sykes is back in BSB after a very long career in the SBK world championship and he did so by embracing the project of Ducati and PBM, the same team that won the title in 2019 with Scott Redding. The start of this partnership has not been a particularly encouraging one, but the British championship really takes time to adapt to, it's a true championship for specialists.

We caught up with Sykes at Donington, where Tom qualified in an excellent seventh position on the grid, only to lose ground in the race. We talked with him about many topics, including Scott Redding's words about the BMW, the bike that Sykes rode until the end of 2021 in the world championship.

This BSB doesn't seem easy to you, yet you know it well.

“It certainly isn't that easy! There are so many things to learn in BSB, I was racing there for a long time, but obviously some things have changed since then. I'm enjoying myself with the Ducati and here at PBM I also found some friendly faces. I certainly feel a bit limited at the moment, but we are working to solve the problems. In some areas we are really strong with this bike, but where we lose a lot, is at the corner exit when we are very close to the corner. We need to improve the way we put the power down on the ground. We’re continuing to work, we will find the solution ”.

You are on a bike that you have challenged many times over the last few seasons. What impression did the Panigale V4 make on you?

“This is my first year on the Ducati and I must say that the Panigale is a great bike. It has enormous potential, I tested it on two tracks in Europe before coming to race here. I think that with this package I could be very competitive in the world championship, even tomorrow morning. Here in BSB I know very well where we can improve. I know Donington very well and after this weekend I understood why the Panigale has never been particularly fast on this track in the past few seasons in BSB. The reason is that you are here with the bike leaning a lot and everything is very clear. At least I'm having a lot of fun when I ride and I think we will soon express our full potential ”.

In BMW you were unable to make the bike competitive, what was missing?

“I don't want to comment on my seasons in BMW, all I can say is that I had fun with the team, I had a great time. They undoubtedly have the resources to solve the problems and I think that by focussing a bit more on the problems they know well, they could solve them. That bike can win races in the world championship, I'm pretty sure. Having said that, I don't want to talk too much about that situation ”.

Redding said that in BMW they follow the computers more than the rider feedback.

“I always tried to give all possible indications to develop the bike. My team was fantastic and I have remained on excellent terms with each of them. Even with Kawasaki I have remained on excellent terms, with them we completely developed a bike almost from scratch. They understood me and were good at putting my feedback into practice. I think Scott was referring to the fact that even if the rider gives certain indications, in BMW they prefer to go their own way. Let's say that knowing Scott, I expect him to be often quite open in his statements this season… it will be interesting! ”.

Many BSB riders also race in Road Races. Is that something that intrigues you?

“I don't think I'll ever end up doing Road Races, but I have enormous respect for the guys who race there. What they do is fantastic, I have a huge esteem for each one of them and they create a unique show in the world. Everyone in life is free to do what he wants and have fun, but I prefer to watch those races than think about doing them. I was supposed to go to the NW200 but I had to cancel because I had to go to Italy, maybe I'll be back next season, but only as a spectator. Maybe I'll go to the TT! But I prefer racing on the track, because there you can squeeze the full potential of a motorcycle, an engine, a chassis. I leave the roads to the specialists, it's better ”.

You are in the Ducati family, do you hope that a call can come perhaps to do a round in the SBK world championship?

“You know, I have to say that joining the Ducati family was very nice. I appreciated the way they welcomed me. I was at Misano to test the bike for the first time and I was a bit nervous. I am a gentleman, I didn't want to go into a Ducati garage to look around, but when they saw me they welcomed me warmly, in the Italian way I’d say! I like this approach it has, each of the guys in Ducati makes you feel at home. If the chance of a race in the SBK world championship came about, it would be nice. In the Misano test I went quite fast and also at Mugello, even if I had a mentality as a tester rather than a rider. But I went strong, I'd say. They saw the potential I have on a world championship bike, I would like to have this opportunity. I would definitely go there ”.

Bastianini convinced that Espargarò would win easily if they were to race...