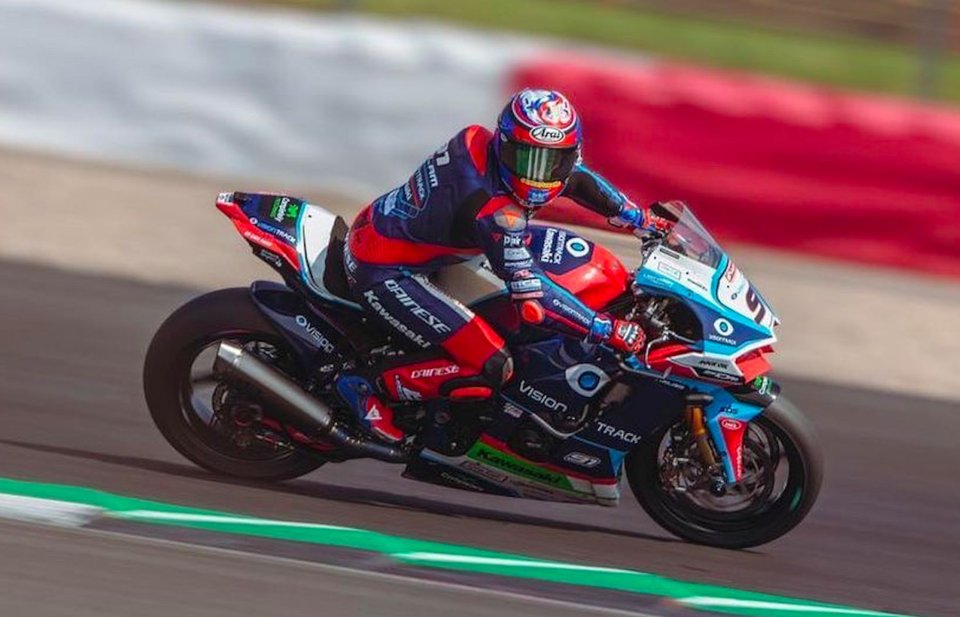 Leon Haslam is racing in BSB this season and for the son of the legendary Ron it is a bit of a return to his origins. He raced in 500s, he raced for many years in the SBK world championship, he won the Suzuka 8 Hours. Certainly he has had a long and successful career, during which he even came close to the world title in SBK in 2010, after a great battle with Max Biaggi.

We caught up with Leon in Donington, during the BSB championship round where he is racing on a Kawasaki. As always very kind, he agreed to talk to us about his present and also to photograph the differences that exist today between the two championships, revealing some very interesting background facts.

From World SBK to BSB. Do you miss that championship, or do you have more fun here?

The last two seasons with Honda were not easy. What was missing in your opinion?

"There were a lot of problems with Honda. When I got there, Covid arrived and in Japan a lot of HRC work was completely stopped from a development point of view. For the two years I was there with Alvaro as a teammate, there weren't many developments, no new pieces were arriving. The problem I think that bike had is that it was developed in Japan using Bridgestone tyres. Those tyres are really very different from Pirelli's, completely another world. I think they have to learn from this. It was a frustrating two years for me, but it was great to be involved in such a great project. It was a shame not to be able to stay there to make the CBR a winner, because I am convinced that it can be. But the good thing is that my teammate was Alvaro and we finished the first season with the same points, we fought each other many times. The previous year he had won 15 races, so for me this was a great satisfaction ".

Looking back, what do you think was your best year?

“My best year was probably 2010, with the Suzuki Alstare team. The expectations were not very high, because the year before the bike had not been particularly fast. But we won immediately, the first race of the world championship and expectations rose suddenly. The bike was good, the team was fantastic. I could win or finish seventh, everyone in the team was happy. It was like a family, for me this is a nice memory, a great season. I finished second in the world championship behind Biaggi, it was my best season ”.

BSB doesn't seem like an easier championship at all. You are there, Sykes is there, Redding raced there…

“BSB is a very competitive championship. There are a lot of fast riders. The rules are strict enough to limit the performance of the bikes, and this sometimes creates something good, other times less because the riders can't learn much and be ready for the world championship. That's how it is, there are many very strong riders racing here and they know it's not easy at all. Sykes is here too and he certainly isn't struggling because he's a bad rider, because he's one of the strongest. But here you have to understand how to be fast, the tracks are particular, the bikes too. In the world championship you can work on every single track on the bike’s electronics, adapt it to the track. Here it is completely different ”.

"I arrived very young in the SBK world championship and experienced the end of an era for a while. These were Colin Edwards' last seasons, the paddock was more open and friendly with the fans, as BSB is today. It was a place where you could have fun with the family, even among riders there was more fun in the evening after tests or races and there was a party. In recent years this sensation was missing in the world championship, perhaps a little because of Covid. But also because today being a rider is more like a job. It has always been a world of professionals, where everyone has done their utmost in what they did. But today with Social Media everything has changed and you are constantly under observation, in the contracts you sign with the manufacturers it is written what you can say and what you can’t ".

It seems that a little bit of freedom is missing.

"It's a bit like being in prison. For me this is not a good thing, but I partially understand the reasons behind it. It is a huge business, it represents the work of many people. In BSB it is as if everything is at a less demanding level. I have an academy in England and I am trying to teach my kids to maintain their personality, even if they have to adapt to certain rules. For me this is the hardest thing ".

You had so many teammates, who in your opinion was the fastest?

“That’s a difficult question! I had a lot of really fast teammates. Noriyuki Haga was incredible. In free practice or in qualifying he was never fast, then the race came and he was truly legendary. Troy Corser was great too, I had a lot of fun with him. But in the end, the king is undoubtedly Jonathan Rea. I raced with him in Honda and also in Kawasaki, and the way he always had to manage various situations is incredible. From a performance point of view, Rea was undoubtedly the best ever. But with Haga and Corser I had more fun! ”.