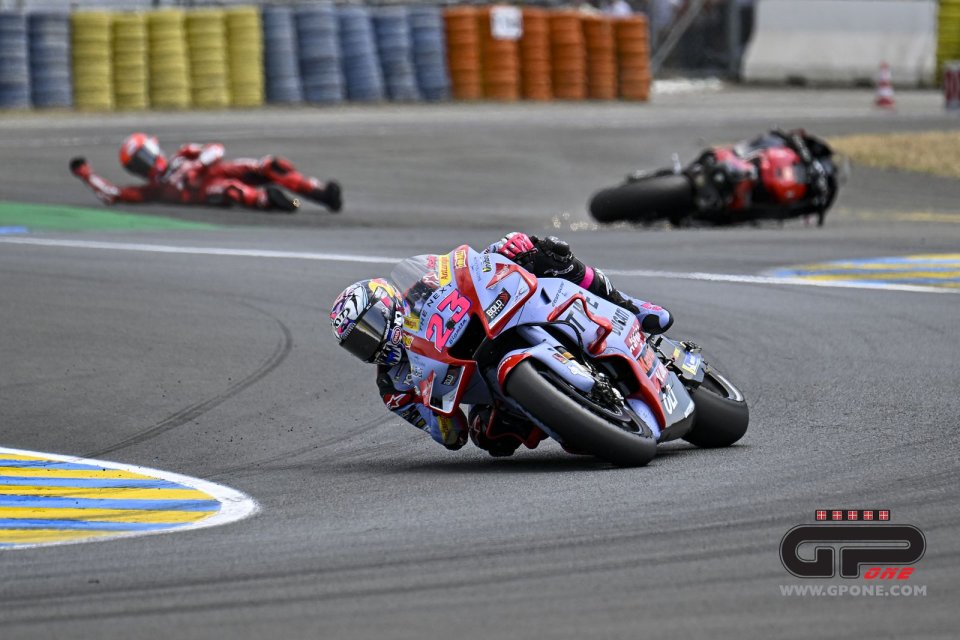 Stendhal wrote 'The Red and the Black', but if he had seen how nice red goes with light blue maybe he would have thought of a change of colour. Bastianini won at Le Mans, putting his hands on a possible place in the factory team and right back behind Quartararo and Aleix Espargarò in the battle for the World Championship. That’s exactly what Bagnaia wanted to do, but instead he crashed, keeping the broken pieces but not even one point.

Quartararo used prudence, his best weapon when his Yamaha is not assisting him. Even Marquez is familiar with the feeling, because he doesn't know which is worse, his shoulder or his bike. Better to take a weekend off, Mugello is waiting.

THE GOOD - A dream from which not to wake up, the exception becomes the rule, Bastianini wins. Once, and then again, and then again. Three out of seven, like no one else, with the classification looking good, Enea sees everything sky-blue, like his Ducati, which is however gradually turning red for next season. The ‘Bestia’ is back roaring and just in time for Mugello. You can’t get any better than this...

THE BAD - Pedro Acosta is too bad, in the competitive sense of the term, of course. The boy is fast, very fast, but he wants to be faster, too fast. He dominates and then crashes, forgivable for a rookie, but with a little more calm he might achieve quite different results.

THE UGLY - Suzuki needed a good Sunday to forget the recent bad news. Two crashes came along which did not help to improve the mood. It never rained but it poured, even when it was incredibly sunny at Le Mans.

THE DISAPPOINTMENT - Riders in the throes of despair and a bike that doesn't work. The KTM transformed from a carriage to a pumpkin when European time struck. The first races gave hope, the last ones brought despair. It seems that in Austria they do not know the meaning of the word middle ground.

THE CONFIRMATION - It's time to stop looking at Aprilia with disdain, as if it had won the lottery. The awards it is receiving are the result of hard work, effort and Aleix Espargarò who has turned out to be a top rider at an age when others are thinking of retirement. The World Championship title is not impossible, and the numbers confirm it.

THE MISTAKE - Immature, unforgivable, in short: a screw-up. Bagnaia has already described his mistake, but the real penance will be to make the words follow the facts. Better to crash when you are fighting for victory, but it is still better to never crash. As Quartararo does, just to name someone at random.

THE SURPRISE - Called in at the last minute in Jerez, reconfirmed at Le Mans. Stefano Manzi has done a couple of holiday GPs in his Moto2. In France he took a To-10 finish, in a class for Italians on the (not too strong this weekend) shoulders of Vietti. Getting rid of him might not have been a good idea.

THE PASS – The ones that we rarely see in MotoGP anymore, the ones suffered by Dennis Foggia on the last lap, making him miss out on the podium. Either way, not a pretty sight.

THE CURIOSITY - An Italian had not won three Grands Prix in the first seven races of the world championship since 2009. The record belonged to Valentino Rossi who succeeded by triumphing at Jerez, Barcelona and Assen. Yesterday Enea Bastianini did just that.

I TOLD YOU SO - "Quartararo will be the man to beat on Sunday". Everyone said it: riders, journalists, friends at the bar, the local butcher... The forecast was wrong, but Fabio was the most unhappy.