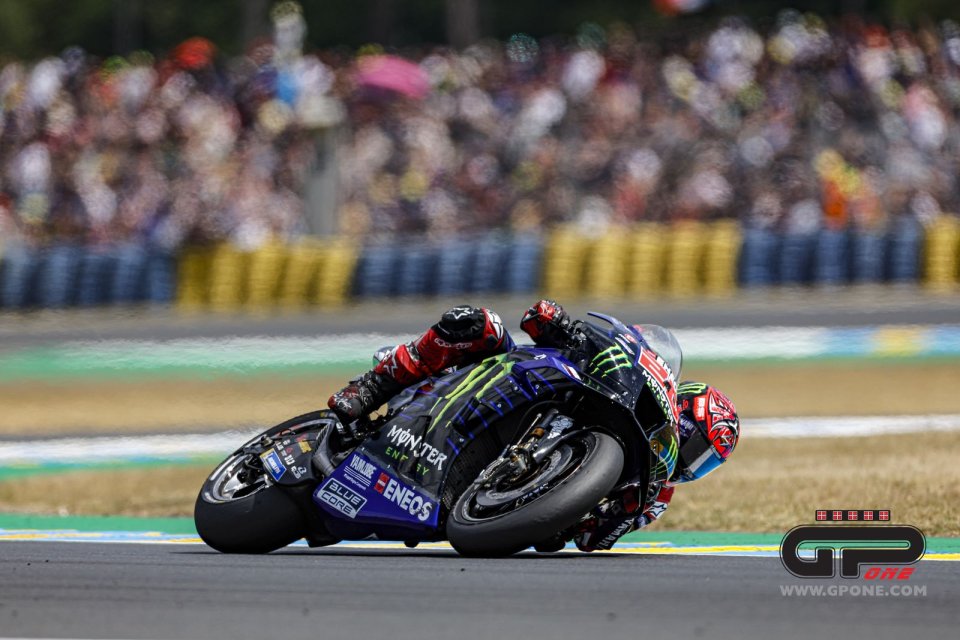 The best race pace and a start from the second row were not enough for Quartararo to be the first French rider to triumph at Le Mans. The curse remains therefore and Fabio will have to wait until next year to try to hear the sound of the Marseillaise on the legendary French circuit.

A wrong start and the difficulty of his Yamaha in getting out of the slipstream of those in front of him, did not allow Fabio to overtake and relegated him to an off-podium position. He was the protagonist of an opaque race, certainly below par, brought about, as recognized by the rider himself, by the crashes that occurred in front of him. And it is precisely this aspect that the Frenchman refers to at the start of his debrief.

"Aleix was fast the whole race, but we weren't able to overtake. The overtaking I did was due to other people's mistakes, in addition to the crashes in front. We were strong in turn 3, in turn 9 but on the straight we lose too much to recover positions. If you make a mistake at the start - with this bike - the race is over ".

In the first laps they were all very aggressive and there were a lot of accidents. Is it because it is difficult to overtake?

“No, no, everyone is aggressive in the first laps. I was okay even if not at my best, but when I am in this situation where I have the pace but I cannot overtake it is frustrating. When you lose five, six, eight meters in acceleration, you can't get close enough at the next corner to gain position. "

Are you satisfied with today's result, considering that Pecco crashed?

“I don’t feel happy about my race at all. I had three crashes in front of me, I cannot be happy about the race because my real position is not fourth – it’s much further back. However, I'm not angry, I gave 100%, and even when I lost a few tenths because I lost the front, I recovered in a few corners. I was very fast but the limit was my impossibility in overtaking "

"It's hard to say. Pecco is very fast and here too he was. Enea is the only one to have won more than one race, three of them. He is the man to beat at the moment. When he has the pace he can be very fast" .

With this overtaking problem, do you think you are still the favourite for the world championship?

“I'm not the favourite by far. The only thing I can do is make no mistakes. If I make no mistakes I can be there, because our pace in every GP we go to - apart from a few like Austin and Qatar – looking at the pace of Jerez, with Pecco we were the fastest.”

Did you have any problems with the front tyre pressure?

"Not much, my problem was not related to this aspect anyway".

The conference ended with a funny little interlude between Fabio and Luca Marini in which some opinions on the front tyre were exchanged. The Frenchman started convinced with a medium tyre, while Luca was pushed by the garage to abandon the soft in favour of the medium.