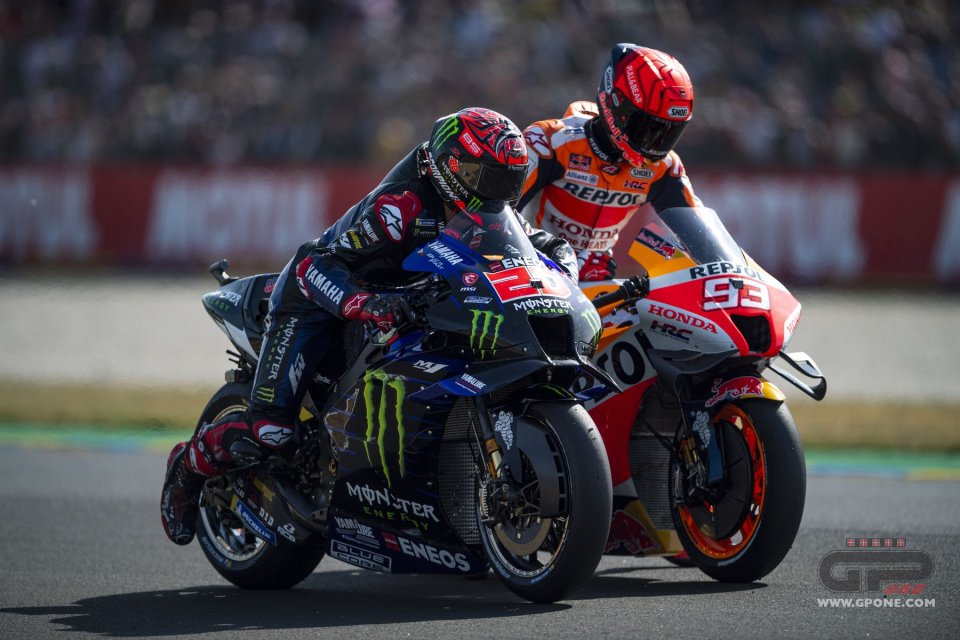 Fabio Quartararo probably dreamed of closing Saturday with another pole to add to his career and right on his home track. But qualifications at Le Mans relegated him to the second row of the starting line-up, specifically 4th behind Bagnaia, Miller, and Aleix Espargarò.

Yet the Fabio who meets reporters at the end of qualifying is smiling and satisfied, aware of having the best pace in his hands with a wide margin to his advantage. He proved it in the FP4, but what  characterized his day is undoubtedly the tow he kindly offered to Marc Marquez in the FP3, when the Spanish rider joined the Yamaha rider twice and, therefore, entering the Q2.

"It was okay to take Marc with me to the FP3,” Quartararo said. “My plan was to do the best lap possible in that session and, when I saw Marc behind me, I realized he wasn’t at his best. I think having him behind is better than having a Ducati, for example. Maybe, with other riders, I wouldn't have done the same but, with him, I let him do what he wanted."

Are you angry that you missed the pole on your home track?
”I was angry at the end of qualifying bu,t two minutes later, I was actually happy.  I wouldn't say we're missing anything in qualifying. But Ducati is able to do something absurd in these situations, as are its riders. We basically have the same pace we’ll have in the race, so it's hard to make a difference. What you do in qualifying is push everything to the limit, yourself like the bike. You can do it for a flying lap, but doing it for twenty seven laps is impossible. I'm quite happy, because I think the weather is good. I feel at my limit. I didn't have anything more, and if we look at where the other Yamahas are, I'd say the gap is big. So that's the reference, and I think we're doing a good job."

Are you worried about experiencing what you did in Jerez, forced to chase a Ducati for the entire race?
"I'm not afraid of a race like Jerez, because I would have had problems there even alone. I would’ve always been at the limit. Here, I don't think the front tire will get too hot. Maybe I won't have many points to beat, but in the race, with lots of laps, I think I'll have a chance to  attack sometimes."

Do you hope it stays dry, or would the rain help you?
”I feel confident, both when it’s wet and also dry, although I hope it won't rain. I have the pace to fight for a victory. I won’t make mistakes. It seems to me that other riders suffer more to be faster with their pace than me. With the medium and soft, I’m ahead. I'm happy about this. It’ll be the same for everyone. I don't really know what to prefer. The last time in Mandalika, I had a great race. Sure, if it rains, I hope it does a lot!"

Could Rins be the surprise?
”I don't know. Alex was very fast, but he did two fast laps, and then he always lost a few tenths right after, as if he had had an important drop. I haven't really checked everyone's pace yet, but the guys in the front of the grid are really fast. If you ride like that, it means you can fight to win. I think I have something more on the pace, and that's why I feel calm in view of the race. I know I have a chance."

Did you discuss the issue of trains on the track in Safety Commission yesterday?
"I wasn't at the safety commission, but we have a rule about the track sectors. We have to be at 110% of a certain time, but I've never actually seen anyone penalized for not being there, so I don't know if it's a rule or just advice, honestly."

Do you feel faster than in Jerez?
”I think I have a better pace than Jerez, where both Pecco and I were really fast. Here, I feel like I'm going faster in a simpler way. I'm really fast and steady. If you look at the FP4, it's obvious. That's why I feel positive and very psyched for tomorrow."