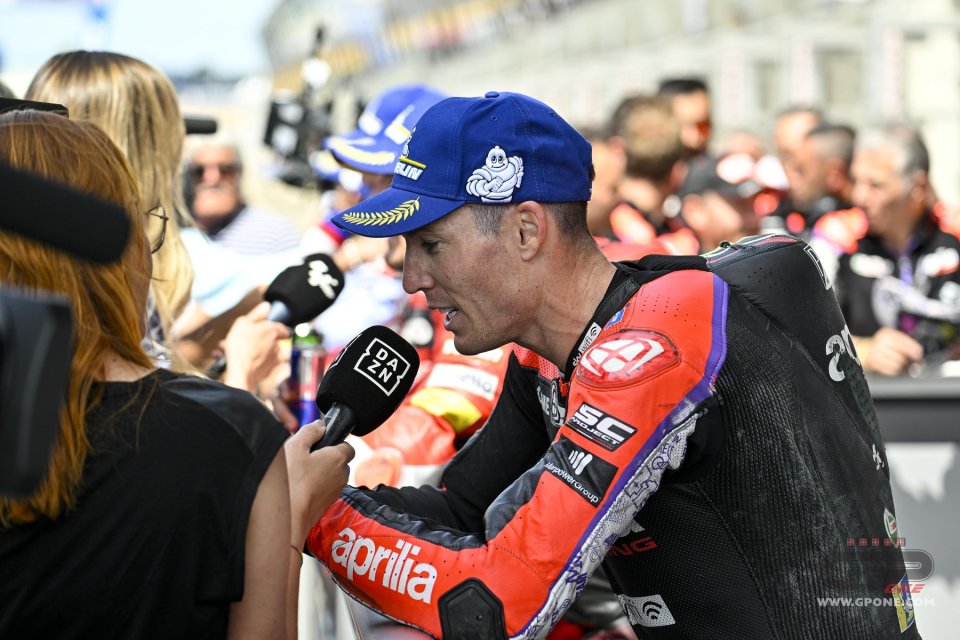 Aleix Espargarò has always been a very fast rider, but unfortunately he has just as often been inconsistent in his performance. He goes from fantastic qualifying to almost inexplicable crashes and the explanation of his past attitude and the change he is showing this season was best explained by Massimo Rivola (read HERE). The third step of the podium conquered at Le Mans allowed him to get even closer to Fabio Quartararo in the world championship standings, just after beating the Frenchman on his home track thanks to a perfect race conduct.

Dreaming big is perfectly OK, Aleix has not missed a beat by finishing all the races this season, taking a magnificent victory in Argentina and then three consecutive podiums at Portimao, Jerez and Le Mans. A magnificent performance. But a contract for the future has not yet been signed, and Aleix is starting to become impatient.

After this podium, you must surely have talked to Rivola about the renewal…

"I haven't talked to Massimo yet, we exchanged a hug. At that moment we just had to celebrate with the team. I don't know what to say about the contract. What I'm asking seems very normal to me, in fact ... it's not even normal. Under the level of the transfer market, but I'm aware of where I am and my age, but I think the right word is respect. I don't know, we’ll see. For sure, even if it's not nice to say so, if Aprilia lets someone who's doing what I'm doing leave it would be the dumbest thing in the history of the world championship. "

Do you think you can win this title?

"I think I can win this world championship, I will believe it until the very end. Aprilia is working well, on Saturday the second bike was also ready and as competitive as the first one after my crash. We improved the start, other new things will arrive at Mugello, some interesting ones. Maybe I also have too much confidence ".

Let's talk about this race and this podium.

"It was very difficult, I was fast but not enough to pass Mir or Miller - said Aleix in the press conference - I knew that today would be a race of survival, the track was very slippery. It was more difficult to follow someone, than to be fast on track today. Every time I got close to Jack the bike moved a lot in front. The front wheel had a very high temperature, I could see it from the dashboard. So I decided to leave it about one second in front to stay there. Then in the final part of the race I saw Fabio on the screens who was really close to me. He was better in the middle of the curve, so I knew that if I went wide in a corner even by just two meters he would pass me. So it was difficult not to make mistakes in the last laps, but the strategy paid off. I'm happy. "

You were good at handling the situation, squeezed as you were between Miller and Quartararo.

"I knew that getting close to Jack I had problems, so I knew that Fabio had the same problem. Except that while he is now a bit stronger in the middle of the corner, he is not in braking. So I knew that I just needed to make no mistakes and brake hard everywhere I lifted off to get on the podium ".

Do you feel the pressure of being so close to the championship leader at this point in the season?

"I'm not worried about being in front. I don’t have any explanations, I'm not understanding very much honestly. This year I have the bike I dreamed of, I asked the engineers to make this bike the one I dreamed of and they did it by doing an incredible job in testing. We are four points behind Fabio in the standings, we are leading the team standings. It's incredible ".

We saw you joking with the other riders in the parc fermé.

"I like to have good relationships with other riders, racing is all about this. You have to have fun on the track and then have fun off. In the end this is a show, I agreed to have the camera mounted on my shoulder and in fact I raced with one kilogram extra for the entire race, so I feel very tired. But that's okay. "

You were the one who managed the tyres best of all.

"Today I was a bit more careful with the brakes. I always braked very hard, but always being careful not to make mistakes. I think the positive thing about the Aprilia is the overall balance. The traction is good, maybe just a bit of pure acceleration is missing, today it would have been impossible for me to keep up with Pecco or Enea. They accelerate more. But everything worked great ".

Did you ever think that Fabio might pass you on the last lap?

"Fabio took advantage of those moments when I let up to get Jack away to get closer to me, I didn't want to overheat the tyre. I did everything perfectly, blocking Fabio was not an easy strategy to do, but I knew he too would have problems with the front tyre as he was following me so closely ".