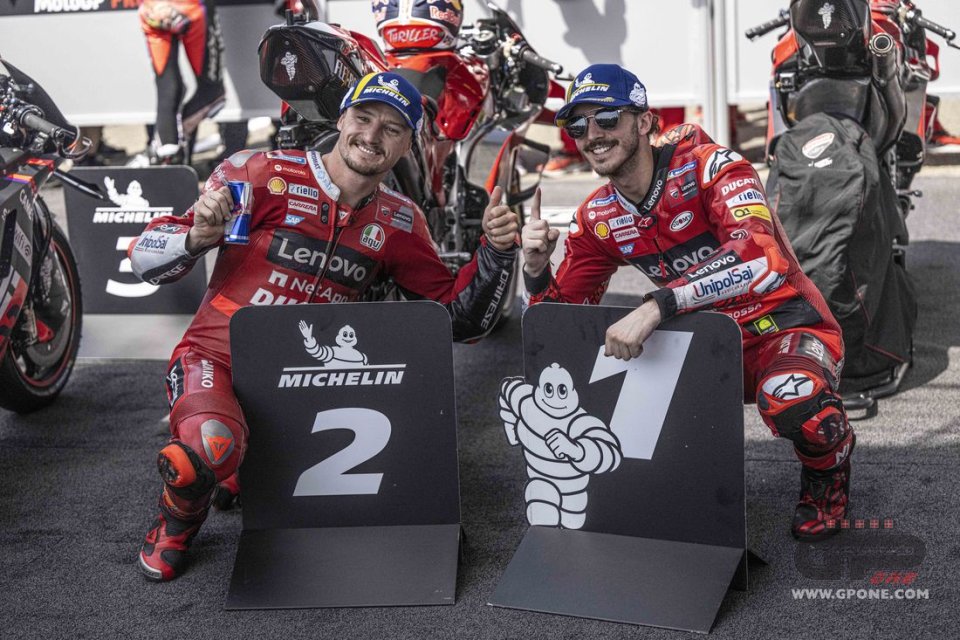 Ducati had never managed to start from pole position at Le Mans, but breaking the curse today was Pecco Bagnaia who, with eight starts from the pole on the Rossa, has now equalled Loris Capirossi and only Casey Stoner is ahead of him. An excellent Saturday was completed by Jack Miller's second place, a team-based 1-2, with the rider from Piedmont giving a tow to the Australian in the decisive fast lap.

"There was nothing planned - said Bagnaia - I like to go out with the second tyre early, as soon as I get back from the first attempt. The others don't expect it, but Jack does - he smiled - I saw him and I was happy that he was there ".

Thanks also to Aleix Espargarò, Quartararo is in the second row.

“For sure Fabio is the man to beat.  But I think that after this modification I did in qualifying, I’m closer now.  FP4 helped me understand what I was missing. In the morning I was happy, but this afternoon in FP4 I was not sure about the pole position because I was struggling a lot.  My biggest problem was to stop the bike, so in qualifying we made a bet with my crew chief and my Ohlins technician, because I was not feeling great.  And then after this little modification I started to feel great again as if it was morning.  The grip was better, I was able to stop the bike better. And finally, the feeling was great. So, I’m happy for the pole position, I’m more happy about finding something that helped me a lot. I think we are ready for the race tomorrow.”

Quartararo is surrounded by the Ducatis, will you be able to block him?

“But it’s difficult to say now. The forecast says it will rain tomorrow.  That complicates everything, even using the rear lowering device will not be easy. If I start well and if it’s dry, I will try to push from the start and try to manage a gap.  But if it’s wet it will be another story. You can’t push like you want at the start, you have to control the situation more. So, it can be totally different.”

Many riders say that it is difficult to overtake on this track.

“That's right, I happened to be behind Luca Marini and I couldn't be as fast as I wanted, I was losing ground. Not to mention that you can't make a big difference under braking because there is little grip. It is difficult, but not impossible ”.

You have made braking your strong point, using an almost dirt track style.

“I started riding like this in 2017, putting the bike sideways to avoid locking the front wheel when braking, a manoeuvre that already paid off in Moto2. But the Ranch did not help me in this, if anything to control the throttle in acceleration ”.

The news has arrived that the number 46 will be withdrawn from the MotoGP at Mugello, what do you think?

“That if they continue like this there will be no more numbers left to use (laughs). Seriously, in Valentino's case it's right, but I don't think anyone would have used the 46, too much responsibility”.

In the Safety Commission yesterday, you talked about more control over the contracts of riders, especially those of the lower classes. What is your position?

“I did not intervene in the discussion, but it was I who asked for greater protection for the Moto2 and Moto2 riders. We have seen that some have been left at home after a few races or even before the start of the championship and that is something bad. I know it is difficult for Dorna to find a solution, but they should try ”.

Are you also in favour of an opening and closing of the market, as in football?

"I'm not the one to ask this question, the only thing I know is that I'm very happy to have already signed for another two years with Ducati (laughs)".

Bagnaia reckons that Quartararo is superior and that they will have to try and...