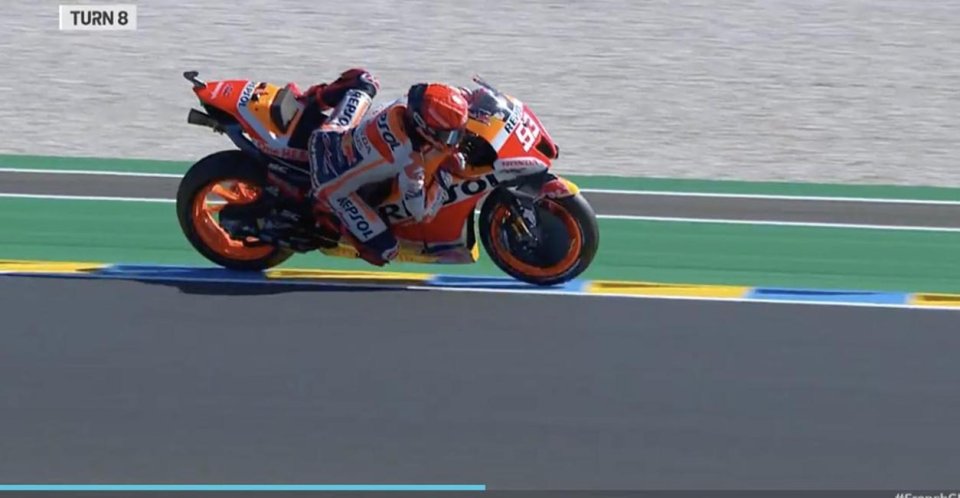 On the one hand, there’s his body, on the other, the motorcycle, and then the Le Mans circuit. In France, Marc Marquez is going to have to face three different aspects that seem to put him to the test. As of Friday, Honda’s rider from Spain is out of the top ten, and he certainly doesn’t intend to hide.

On the contrary, he wants to show his limits in a clear manner, while maintaining a bit of confidence in view of the continuation of the weekend.

"Today I used everything I felt in Jerez,” Marc began. “It wasn’t a great change, but certainly something useful. Tomorrow we’ll try a different set-up to better understand the sensations and  to progress and try to get to the top ten. I expected a complicated day, since I struggle every Friday. Maybe today more than usual, especially when I mounted soft tires in the end. Among other things, I made a mistake, which compromised my performance."

His focus  shifts to the race pace.
"We’re far from the best with the pace, but tomorrow we’ll look for a solution to progress. At the moment, we’re three to four tenths slower than the big ones, and this means reaching the finish line with more than ten seconds. So we’ll have to work to improve and be fast. I obviously don't expect to improve by half a second, but maybe get a couple of tenths. It’ll be complicated."

Marc then talks about what his current conditions are.
"The sensations are the same as always. I tried to ride with a different riding style, with the intent to improve our weaknesses and be fast. You have to keep working to be fast. At the same time, however, we have to try to be realistic."

Marc is especially clear on this point.
"I already knew I'd struggle on this track. I’m calm, aware that we’re working. I signed for four years with Honda ,with the goal of working to try to win the world championship. During the winter, when you train, you always think of the title as a goal, but then you have to face the facts, and the reality of it all says that we’re not world championship material, and it wouldn’t even be fair to think it."

Marc gets into detail about that.
"You can't think about the title when you're struggling to make it to the top ten. You have to try to be realistic and understand the moment. Last year, the races were fifteen, twenty seconds slower than now, where everyone improved. The Honda is certainly a more competitive bike, but all the others have made important progress. So we have to be realistic. Right now, I'm here to work and be competitive, without trying to recuperate points from those in front of me."

He then sends a message to Honda.
“If I were to sign again, I’d do it again with Honda, since they waited for me, they know me, I know them, and there’s a great relationship between us. HRC is relaxed, they believe in me and in my qualities, without rushing. Obviously, the goal was to win four years in a row, without injuries. Unfortunately. it went differently. We’ll have to continue to work hard, insisting."

The last thing he talked about was his rescues, which certainly didn’t go unnoticed.
"In the FP1,  I avoided the fall with my knee and with a little luck while, in the FP2, I had to put my body into it. The  afternoon one was a real rescue, almost reminiscent of a similar one in 2019. Today I think I pushed, I gave a little more than usual with the Honda. Unfortunately, with the soft tire, we’re not able to do well. In fact. the best time came with a used medium. So tomorrow we’ll see how to improve and make the soft work."

Among those who shone today in Le Mans are Aleix Espargarò, as well as Bagnaia and Quartararo.

“Aleix is someone who knows his bike really well. He's doing well with the Aprilia, especially exiting corners, where he has a lot of grip. He rides well, but the same goes for Pecco and Fabio."