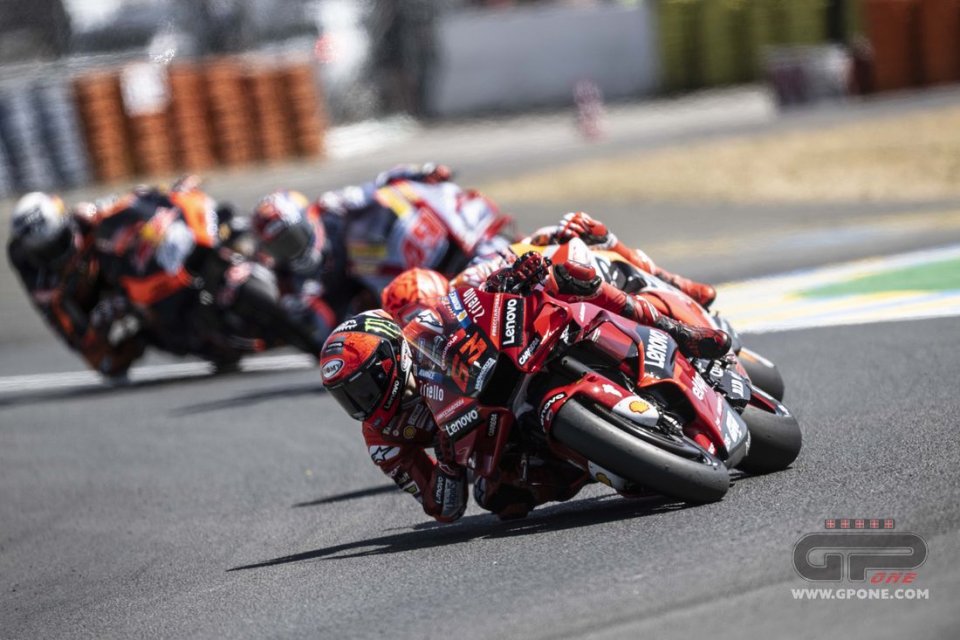 Bagnaia was fifth at the end of Friday's free practice in Le Mans, but the gap of almost half a second from Bastianini shouldn’t give the wrong impression. In fact, Pecco set his best time with the medium tyre because, when he mounted the soft, he encountered some problems. And he wasn't the only one.

"My time attack was a bit of a disaster - he smiled knowing he didn’t have to give it much importance - I practically did four laps always finding the yellow flags. I never had the chance to find a free track, but the positive side is that I am fifth without having succeeded ”.

There was also a lot of traffic on the track, with many riders waiting for a tow.

"We already talked about this in the Safety Commission at Jerez, as far as I'm concerned the situation is becoming ridiculous - he continued - We also thought about introducing the same penalties as Moto3, but it could be a double-edged sword. However, if you think about it, the riders who slow down are always the same and you have to start evaluating what is happening. Today was not nice, after the first yellow flag I turned around and I had six riders behind me, everyone closed the throttle and turned their heads, pretending not to see me. It doesn't seem like MotoGP rider behaviour to me ”.

Quartararo said you should set a good example for the Moto3 riders.

"He’s right. I'll tell you one thing: in Argentina, in free practice, I got nervous because there too I had six riders following me, so on the straight I closed the throttle and changed my line, a manoeuvre that was worse to see on TV than dangerous. That day, Deniz Oncu told Race Direction that if Bagnaia did that manoeuvre, then they could do it too. This is the point we have reached: they study us to have an alibi ”.

Do you think sanctions are the only way to solve the problem?

"I think we're old and mature enough to sort things out on our own."

Let's move on to your day.

"My pace is good, I did a couple of laps in 1’31.6 and I had incredible sensations with the medium tyre at the rear, every lap I was able to be more consistent and faster. The other two very fast riders are Quartararo and Aleix Espargarò, we have a similar pace ”.

So will it be the three of you once again, like in Jerez, fighting for the podium?

“I don't know, I prefer to think of myself. Today I did a good job, even in FP2, with the worst grip, I managed to improve my pace, as did Fabio and Aleix. Anyway, we are only on the first day ”.

Many riders spoke of a particular grip today.

"There is a strange grip, we set incredible times thinking about the track conditions. Already this morning there was something wrong, but I thought it was only because it was the first session, but in the afternoon it was even worse. Last year I crashed in FP2, the only dry session, because I didn't have good feelings on the front, they’re not excellent now but despite this I am much faster ".