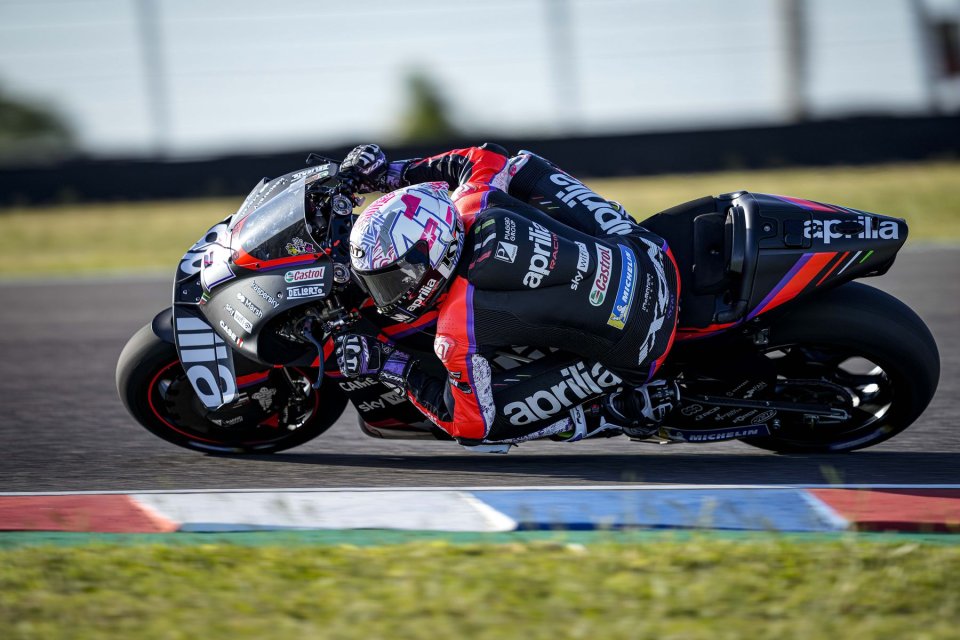 After the loss of the concessions due to the excellent results this season, Aleix Espargarò continues to demonstrate the enormous step forward made by his bike as well as his consistency as a rider in this championship. He was first in FP1 at the Le Mans circuit, then handed over the position in FP2 to Bastianini (Ducati), but following him closely just a few tenths behind. Expectations at Aprilia are rightly high considering that with one victory and three podiums the Spaniard is second in the standings with 82 points, a stone's throw from the leader Quartararo.

After last Monday's tests at Jerez, have you made any changes to the Aprilia?

"Yes, on the straight it is better - Aleix declared - the seamless gearbox seems smoother and faster, it is also lighter than before. Even at the start it has improved, if I had to look for a negative side, but I would talk about something different rather than negative. the engine brake at corner entry is different and slightly changes the balance of the bike. I usually run with a general setup so I noticed the difference in that area, but overall the first impressions are incredible, the technicians have done a good job".

So are the expectations for the race good?

"I'm not saying that it will be easy to repeat the Argentina result, but the feelings are really good and the bike is very fast, but the weather on Sunday is still an unknown factor and unfortunately we have no control over that. I think the Aprilia is one of the most competitive bikes, and I know my skills as a rider, but the feelings in the dry and in the wet change drastically ".

Has the colour of the rims changed as well, as with the Ducatis, are you also using a particular paint?

"Yes, it helps disperse the heat better, we started using them in Indonesia this year, but it's not the first time. I remember trying them two years ago at Mugello on a very hot day, and we managed to lose a couple of degrees. Now it's different, the level in MotoGP is so high that we have to use every little advantage. "

There is also a lot of talk these days about tyre pressure.

"I love analysing data with the technicians, you have no idea how much every little difference can have incredible or disastrous effects on performance. A half degree can make the bike shake or slide away, it's incredible. I think that now for the direction MotoGP is taking, with bikes that are more and more similar to each other and stringent rules, each of these little things ends up by creating enormous advantages. We have now arrived at the point where the engineers are battling against each other to invent something new, it was like that with the wings, I'm curious to find out who will be the best engineer in the races to come ".

Everything seems to revolve around the front wheel.

"It is exactly like that - the Spaniard continued - It is for this reason that we are trying not to revolutionize the bike, every modification could completely destabilize the balance with the other components, it is a huge risk and we do not want to arrive on Sunday and find ourselves facing this type of unknown factor".

Looking more generally at the bikes on the grid this year, it seems that the Aprilia has become the most balanced bike. What do you think?

"At Jerez I had the pace of Pecco and Fabio, but I was behind. For sure the Aprilia has become a very competitive bike, but I think the Suzuki is also a very balanced bike. Yamaha also has an excellent base but it lacks a bit of power which is fundamental. I think that when we arrive at circuits like Mugello, Phillip Island, Motegi Fabio might suffer a lot there", concluded Aleix.

Bagnaia: "Expectations are high for Misano, I mustn’t lose concentration...