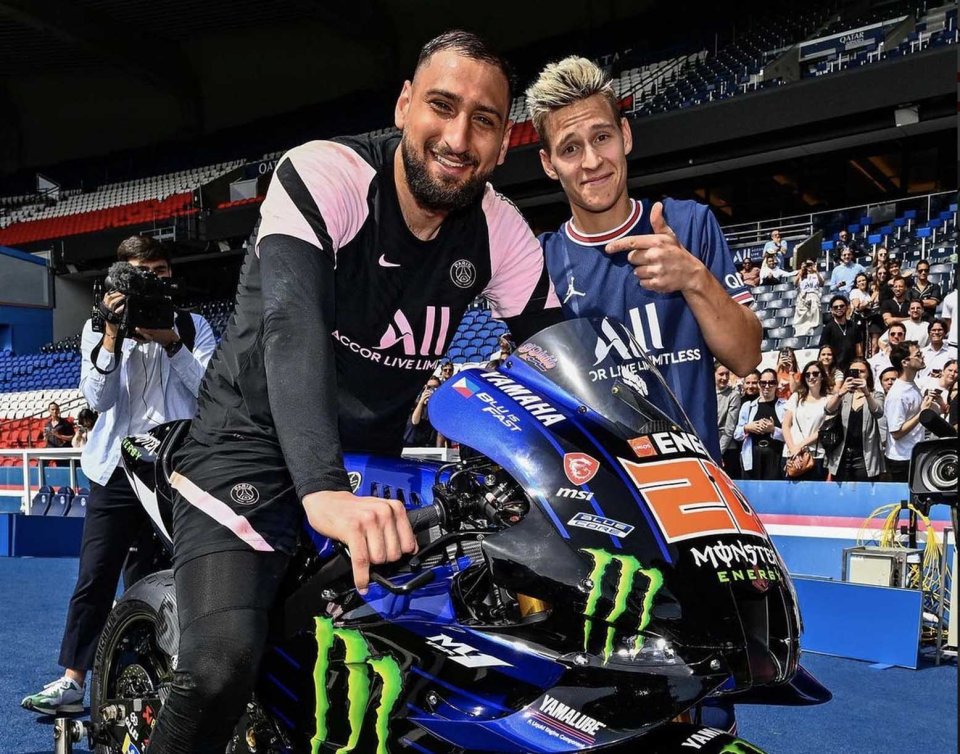 Fabio Quartararo arrives at his home circuit at Le Mans as the leader of the World Championship. It is the first time this has happened, and the Frenchman knows that expectations are high but he eased the pressure in the morning at Paris Saint Germain's Prinzenpark stadium in Paris. The reigning MotoGP world champion was able to take a tour of the stadium on the Yamaha M1 before the Le Mans GP and then chat with the champions of the football team.

“It was a fantastic experience to be in the stadium and to go around the arena on a motorcycle. I also got to play with the Paris Saint-Germain guys, which was fun," said Fabio.

How will you approach this home race?

"I'm looking forward to my home race, I'll give it my all obviously, but it can also bring more stress and pressure - admitted the Yamaha rider - I'll try to tackle this race like any other circuit, I want to enjoy the race with all the home fans. In the last two editions there was no public, so this year will be special. It will be vital to have an excellent qualifying, choosing the right tyres, but it is difficult to predict the result: it is a completely different track to Jerez ".

Then the world leader spoke of the recurring rumours about the future of the RNF Yamaha team.

“If I remain there for next year, then at the moment having two bikes is not really a problem. At the moment we struggle a bit to compare data with the second team, so for me it would not be a problem."

The weather appears to be stable but the French circuit is famous for sudden rain showers.

"If I had to choose I would prefer to run in dry conditions - continued Fabio - but I think that both at Mandalika and in Portugal we made big steps forward in the wet so I don't think it will be a problem".

Le Mans is also Johann Zarco's home GP, a track that in the past has given him two podiums and a pole and which therefore the Frenchman sees very favourably.

"I hope to do well on this circuit - Johann tells us - the data are promising in the dry, it will be important to try to have a good feeling with the bike. In Jerez the result was disappointing and in the subsequent tests we tried to find some solutions. The energy of the fans will certainly help, not least because they haven't had a chance to run wild in two years. Track conditions will also be important, and we know that sudden changes can happen here. I think Jack Miller will be among the opponents to beat, this is one of his favourite circuits ".

Your results this season have not been bad, but you seem to lack consistency to be able to move up in the standings.

"Yes, the goal at the moment is to try to get good performances in each circuit. After all, in this championship there have been many podiums and many different winners, and the fact that we have been among them I think is a positive sign, we are fast and we can do well, but unfortunately the two crashes in Spain and Argentina hit us hard in the standings" added Zarco.

What are your favourite and most difficult spots on this track?

"I really like the first sector - Fabio said first - even the fourth but the first is my favourite if the temperatures are good. If, on the other hand, they drop, the risk of crashing increases a lot in the third corner".

"Turns 11 and 12 are nice corners as far as I'm concerned, while perhaps the exit from the chicane often causes wheelie problems, Turn 3 is demanding and you have to move a lot on the bike to be able to do it" added Zarco.

In football it is often said that "playing at home" is a big advantage, is this also the case in MotoGP?

"No Frenchman has ever won in MotoGP on this circuit, so the statistics are not in our favour - joked Quartararo - but I think that as good as it is to have so many fans here for us, it's not like football. It's not an advantage also because in the middle of the race the noise of the bike is bigger than the cheering of the spectators, but we will do our best in any case trying not to disappoint them ".

"Having all this cheering gives me a big smile, it doesn't happen in other circuits. It is clear that in this sport hearing the singing and cheering of the spectators during the race is almost impossible. For the same reason it is not even possible that the noise of the fans disturbs our opponents as often happens in football, I seem to remember something similar at Mugello against Marquez, luckily it no longer happens. But overall, even if we don't hear them, we can see them on the sides of the circuit and they can be a source of motivation to push us to do our best" continued Johann.

There was also a lot of talk about the issue of tyre pressure, and a possible regulation as happens in Moto2. According to Bagnaia it is a false problem.

"I agree with Pecco - Fabio intervened - tyre pressure is important but it is difficult to predict what could happen in the race. Between being at the head of the race or being behind other bikes, the tyre conditions change drastically, it's difficult to make such planning. In Portugal I happened to have a lower pressure throughout the race. I don't know if imposing rules would solve the problem, which only occurs on the front, while the rear does not suffer. Maybe we should talk about it directly with Michelin to find a good compromise, also considering the general direction taken by MotoGP ".

"Yes, at Jerez I didn't have a good feeling on the front and being behind Bezzecchi I ended up in the gravel. If they set limits for safety reasons I would understand, but I think that in MotoGP there are already enough measures and to have serious problems the tyre pressure should be really low" concluded Zarco.

Binder: "My KTM was like a shopping cart at Le Mans"