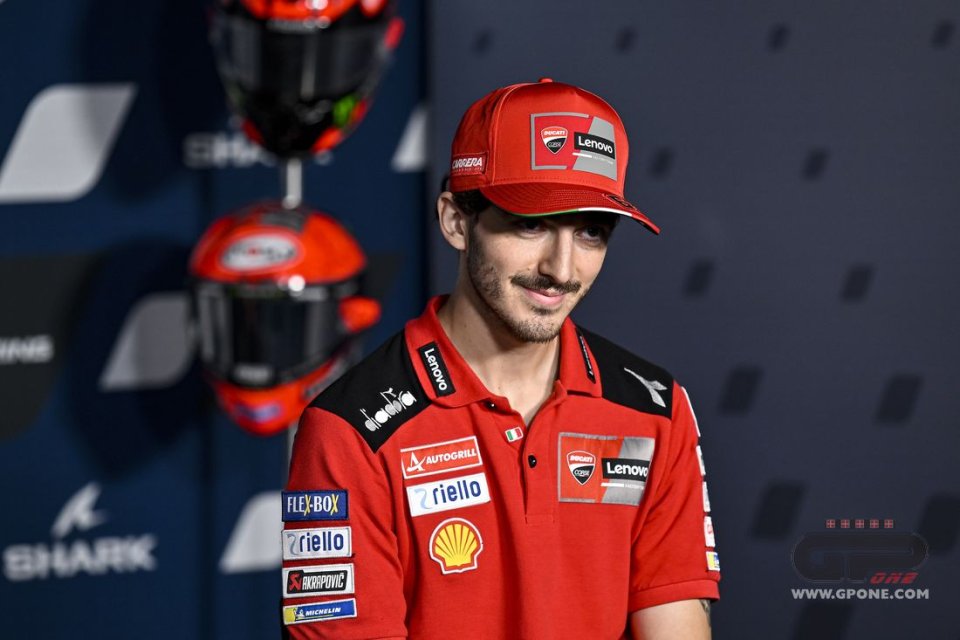 "Please, no more questions about tyre pressure" said Pecco Bagnaia, knowing full well that he will have to pay the price and talk about it. Gigi Dall’Igna has already given his answer on the subject, but now it's up to the Italian rider to explain what happened and he didn’t hold back, at the press conference for the Le Mans GP.

“The situation is quite clear - he began - The pressures are decided by thinking about whether you will do a race ahead or behind other riders, but it is difficult to predict and it is not an easy job, especially in hot weather, like in Jerez. I read that it would have been illegal, but since the beginning of the year the same thing has happened to 18 other riders. We are talking about nothing and I think the other riders agree with me. "

Pecco is not wrong, because from Quartararo to Marquez, everyone agreed with him, repeating his explanation.

“Michelin recommends a pressure to start, which is not mandatory anyway. At Jerez I was between 1.85 and 1.89 bars for the whole race, it doesn't change much with that difference ”.

Did it bother you that this document was published after your victory?

“No, if anything, I find it bad that it is not known who divulged such a confidential document. I hope they find the culprit because this fact is more serious than it seems, Michelin stressed that these figures should never have come out. I don't care if it happened after one of my victories, we know what the truth is and we also know that Ducati is always being watched. Amen".

Let's move on to you, how's the shoulder?

"Better, I worked well at home and, even if I'm not 100% yet, I think I won't have any big problems riding and I can reduce the use of painkillers".

Last year, after your first victory, you never stopped winning. Can it happen again?

“It would be nice to have the same trend, but it will be difficult. Here at Le Mans last year, I was competitive in the dry, in theory there should be good weather this weekend. For sure it will only rain on Sunday at 2 pm (laughs). Anyway, Yamaha has always been fast here, like Zarco and Miller ”.

In the rain, Ducati is competitive, but you weren't at Mandalika.

“In Indonesia I found myself in a strange situation, normally I'm fast in the wet but there I was slow. In Portimao, however, I was fast. Last year, here at Le Mans, I was fourth with two Long Lap Penalties, but it's difficult to make predictions today, it will be easier after the first practice sessions."

Are your problems with the GP22 definitively resolved after the victory at Jerez?

"The problem is having done the winter tests on two tracks where we hadn't raced the previous year. I felt like I was missing something and in Qatar we saw the difference, I was no longer able to do what I was doing the year before. We continued to work and finally in Argentina we took a step forward, another in Austin, where I finished fifth without being competitive, then in Portugal I didn't get a good result but I felt good sensations. In Jerez I took the decisive step forward, I found the same confidence as in 2021, even greater ”.

Bagnaia aims to focus on himself this year, says winning has changed him