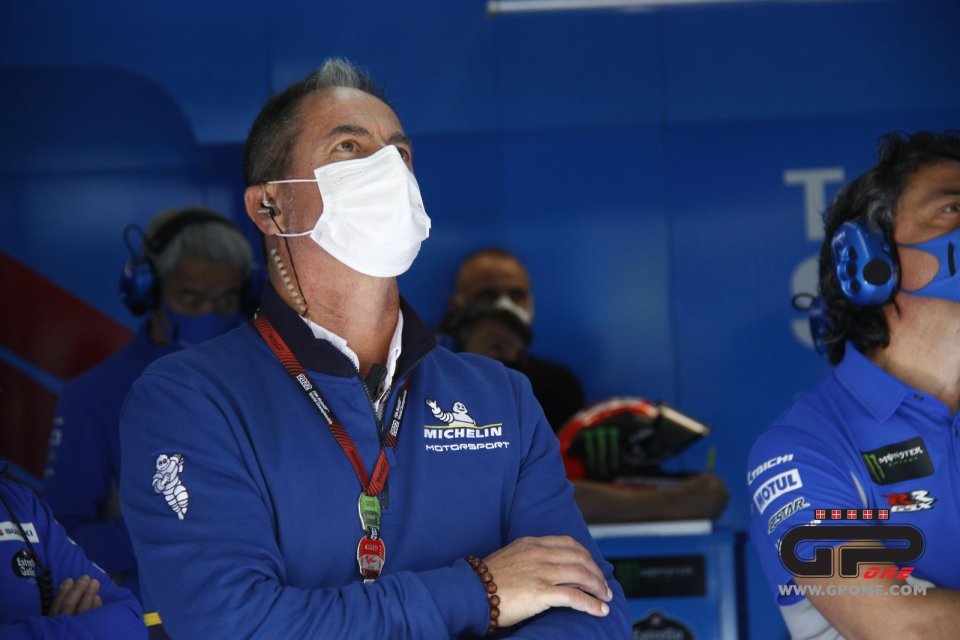 The 'tyre pressure case' seems to be deflating rapidly, if you allow us the pun. Yesterday, Ducati Corse General Manager Gigi Dall’Igna explained what lies behind those data relating to the Jerez GP (in which Bagnaia is reported to have raced with a lower front tyre pressure than allowed) published by MotorSport Magazine.

Michelin is not a party to this dispute, because it is simply supplying the tyres to the riders and not enforcing the rules. However, it is Michelin’s field and for this reason we asked Piero Taramasso to explain better what that table means.

"Those data are real, but they must be explained - he set out - Michelin supplies the tyres to all the MotoGP participants and we indicate the minimum pressures to be respected, then MSMA, IRTA and Dorna decided to work together this year by sharing the data of all the riders. This is done in order to understand how the system works and then implement a more robust one next year, with unified sensors, which have the same tolerances, and with a data transfer channel accessible only to Dorna and IRTA. Only in that case can measures be taken".

This year it is not possible?

“No, because the various teams use different materials, some from McLaren, some LDL, some 2D. They are sensors with different tolerances and the transmission channel is open, anyone can modify that data. Unlike what happens in Moto2 and MotoE. Now we work on trust, the teams know which values ​​to respect and they also know that they cannot play around with the tyre pressures because the consequences could be disastrous. Nobody dares to run with lower pressures than those we indicate ”.

In that document published by MotorSport Magazine it is not written about how far the limit has been crossed.

“For example: the limit for the front tyre is 1.9 bar, if a rider were at 1.89 and the sensor tolerance was 0.02, then it would still be legal, even if it dropped another tenth. The data must be read knowing what lies behind it, it is more complicated than it would seem ".

What advantage does a lower pressure of hundredths of a bar give?

“To be honest it is not said that with a lower pressure you have an advantage, it is not mathematical. In some occasions it can help and in others penalize, it is not automatic ”.

Do you think someone is cheating?

"Today in MotoGP there is no one playing around with tyre pressure, everyone tries to respect the minimum values ​​and they know that lowering them too much could also cause the tyre to break. It may be that there is someone more or less at the limit, but all are close to the values ​​we indicate. As mentioned, the data is shared among all the teams and no one would allow themselves to use lower pressures. However, it is not Michelin's job to judge what the teams do ”.

Does doing a whole race behind another rider affect the pressures?

“If you are on your own, the tyre has a tendency to cool down and the pressures drop, if you are in the slipstream the opposite happens. It is a phenomenon that happens on some circuits more than others and even when the temperatures are higher, not to mention that there are more sensitive bikes and the rider's riding style also counts. There are so many parameters to consider when deciding on pressures in the cold light of day. It is not a simple operation, Michelin has a dedicated technician who works with all manufacturers ".