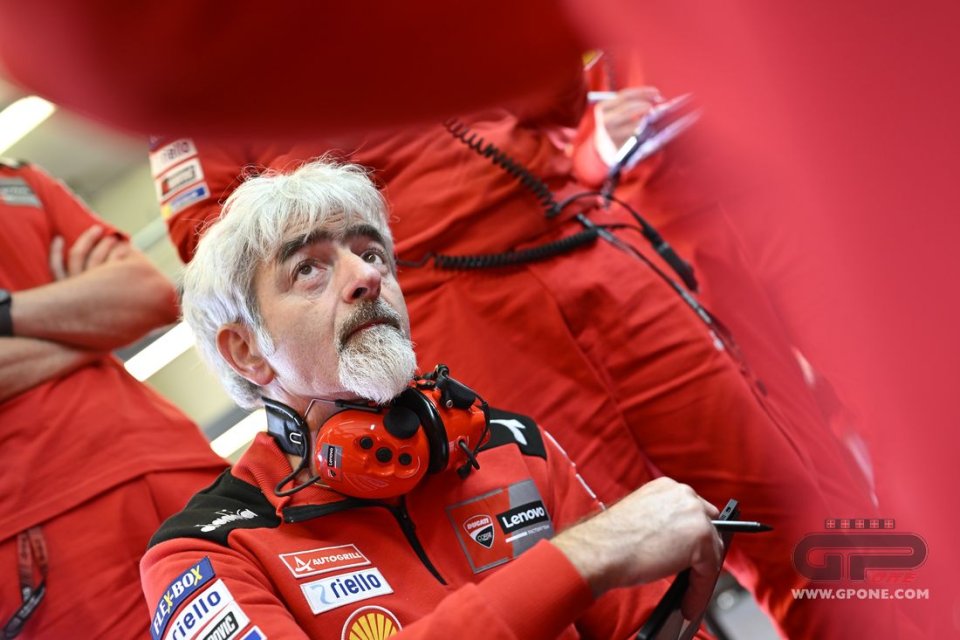 “Why weren’t Ducati and Pecco Bagnaia sanctioned for running an illegally low front-slick pressure during their ride to Spanish Grand Prix victory” was the accusation launched by MotorSport Magazine and written by Mat Oxley, who accompanied an article with a document that would prove the Ducati rider’s infringement of the rules. The conditional, however, seems to be a must because Gigi Dall’Igna, General Manager of Borgo Panigale, promptly called a press conference to explain the way things are in MotoGP at the moment.

"The regulation provides for a minimum pressure, but you have to think about how it is controlled - he began by explaining - Because at the moment the manufacturers use different sensors, which means that their accuracy is different. We are not talking about cheating, but about the fact that tyre pressure control does not happen in the same way for everyone ”.

Is it the only flaw in the system?

“No, because right now the method in which the data is acquired is also not fool proof, so it allows anyone to correct the signal. Ducati does not do this but there is the possibility - and I cannot exclude that someone else does - to modify this data to pretend to be within the correct parameters when you are not. Then there is another point ".

"Every system has a measurement error, so what appear to be values ​​within the regulation may actually not be. As in the case of speed cameras: simple measurement is not trusted, but an error is expected ".

Why was that document disclosed?

“This I don't know, it should only be shared between the manufacturers because it does not take into account the corrections of the measurements. We are working in the MSMA now to have for the future, for next year, a reliable system to control the pressure of the tyre. At the minute, the system that everybody of us are using is not reliable. That means that we use different sensors, and that the system is not blind. If someone wants to, he can modify the values of the pressure. The system is not reliable enough to apply any sanctions. All the MSMA manufacturers are working to do a system for 2023 that is reliable and blind in order to control the pressure and to apply some sanctions if some riders or some manufacturers don’t follow the rules.”

Has it already happened that other riders were under the limit in previous Grands Prix?

“It definitely happened, we know that because, as I said, we share that data. But I don't want to put myself on the same level as those who raised this fuss, I won't mention names ".

Can you at least tell us if one of them also won a race?

“Yes, it happened and I'm not talking about Ducati riders”.

Are you amazed by this attack?

“Someone gave the journalist the info, the strange thing is that he has not checked properly because there have not been any sanctions, since those data are shared by everyone and Michelin controls them. The agreement between the manufacturers is to collect that data to create a rule that can be implemented in 2023 ".

Can you explain the reason why this attack came after Bagnaia's victory?

Is there a regulatory vacuum right now?

“There have been so many rules that we have corrected and managed well in the past. The pressure control system is evolving in the right direction, we are collaborating together with Dorna, FIM and Michelin to implement an efficient and effective control system. At the moment, however, it is not and we all know it. Those values ​​do not prove an infringement because the measurement method is incorrect. In front of a judge they would be worth nothing ”.

Do you feel comfortable for the rest of the season?

“I have not raised this fuss, I have never made controversy against other riders who have obtained excellent results, probably and reasonably not being within the limits. As, after all, for how the system is made, even those who appear to be inside may not be, those values ​​could be false".

Is putting a limit on tyre pressure just a question of performance?

"There is also an important safety issue. If it is relatively easy for the rear tyre to move within the values that Michelin prescribes for us, it is extremely complicated for the front tyre. The tyre pressure, which depends on the temperature, depends very much on whether you are riding in the slipstream or not. That's what happened to Martin: when one expects to slipstream a race, they tune the system in a certain way. On the other hand, if one thinks that he will ride alone in the race, he adjusts the parameters in a different way. But if the opposite then happens, the values are too high. The range in which we have to stay is extremely small ”.

Can you go into even more detail?

"The tyres work well at certain pressures, Michelin tells us that the minimum for the front is 1.9 bar, 1.7 for the rear. Pressure and temperature, however, are not constant during the race, simplifying it can be said that they enter full capacity in the 9th or 10th lap, but it is not a rule, the conditions, the track, the slipstream all have an influence. Precisely for this reason, for next year, we are thinking about how many laps this threshold can be crossed. For example, if someone adjusts tyre pressure for a race alone, but ends up behind others, they risk over-inflation and a fall. Because from a certain value the grip decreases and it becomes dangerous. For the front, at 2.2 bar the drop becomes significant ".