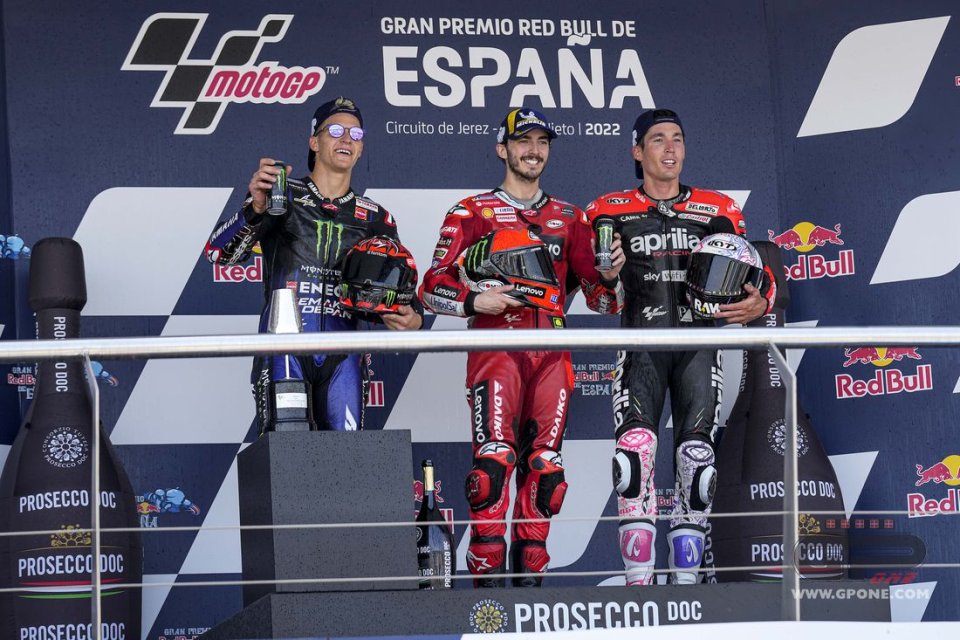 We left them just over one week ago on the Jerez podium, both happy after a race in which they gave a riding lesson to everyone else. Pecco Bagnaia was on the top step, with a step further down Fabio Quartararo, who, however, settled for the first place in the World Championship. We expected a head to head between them right from the first GP, he finished sixth and now we wonder if it will continue like this for the whole season.

The Italian and the Frenchman were the favourites before the championship had started, they still are even if the balance sheet for the moment hangs on the side of the Yamaha rider. Not so much for his advantage in the standings (33 points at this time of the season is not much) but for what El Diablo has shown so far. Not even one flop, a victory and three podiums. Fabio has been racing like the world champion he is, gritting his teeth in difficulty and taking advantage of good opportunities.

The complete opposite of Pecco's beginning of the year. In Qatar he had a fight with his Desmosedici and that fight knocked him back for a few races. However, in his lowest moment (the crash in qualifying in Portugal which earned him a battered shoulder) he managed to get up. His comeback at Portimao was great (but the points earned were few) and his Spanish weekend was fantastic. What everyone expected from him…

At Le Mans, however, Bagnaia will have to show that Jerez was not an exception, but the rule and that he will be able to stand up to his rival throughout the season. Starting from a track where neither of them has ever won (or rather, the Italian has, but in Moto2). With forecasts promising an early summer, it will be a normal and decisive weekend.

So different from those of the last two editions, in which rain was the protagonist together with the Ducatis: in 2020 the one ridden by Petrucci, in 2021 by Miller. Two good precedents for the Rosse, but as mentioned this time it will not be the weather that will tip the balance.

It will be a 'smooth' GP in which Bagnaia and Quartararo can and will have to continue their tug-of-war, but without forgetting that they will not race alone. Between two litigants there is always a third wheel and this time it is represented by the Aleix Espargarò/Aprilia pairing, who are experiencing a honeymoon that began with the victory in Argentina.

It's easy to forget about them, because the RS-GP has been the ugly duckling of MotoGP for years and the same can be said of the Spaniard. Now, however, things have changed, the definitive transformation into a swan is ever closer. It is no coincidence that Aleix is, together with Quartararo, the only rider who has always scored points this year and, again like Fabio, the only one to have been on the podium three times. A clear demonstration that Noale's results are not the result of favourable coincidence, but of an achieved and solid maturity.

At Jerez, without the hitch of Marquez and Miller on his way, Espargarò's gap from Bagnaia would have been more human and his pace clearly better than the rest of the grid.

It is always said that once in Europe the group of contenders for the title would thin out. It hasn’t completely happened yet, but after Le Mans things will be a bit clearer.