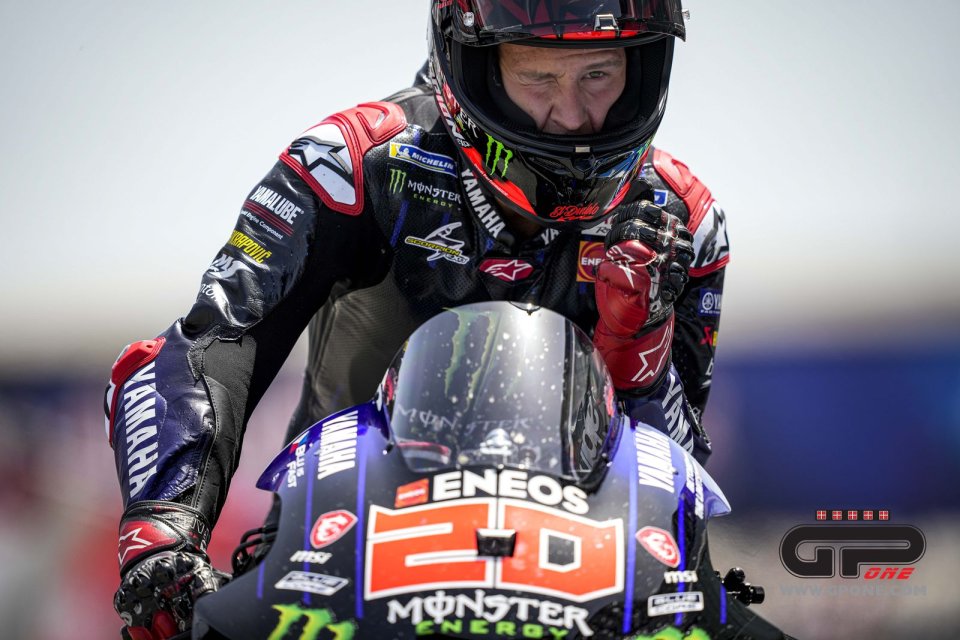 Fabio Quartararo, after his success last weekend in Portimao, today achieved another excellent result on the Jerez circuit. From the early laps he chased poleman Bagnaia, who never gave one inch and defended his lines. The two riders ended up leading a race in pair by pulling out an abyss between them and the rest of the riders in the race. Victory for Bagnaia and a second place for Quartararo, who thus defended the top of the championship standings and increased his lead, chased by Aleix Espargarò's Aprilia, now second in the standings thanks to a second consecutive podium.

Fabio's race pace was incredible, but not enough to overtake Pecco. Above all, the start with the holeshot device must have made a difference.

"I had a great start - explained the French rider - but Pecco braked incredibly in the first corner and also in the next one. My goal was to overtake Pecco in the first two, three laps. But he was super-fast, was braking super-good and tight. So, it was tough and when I was behind him my front tyre had the feeling that the front pressure and front temperature was super high. And I had to make a small gap to Pecco because I couldn’t ride behind him. I knew that if I didn't manage to overtake him in the first laps things would have become more difficult for me, especially regarding the wear of the front tire, and that is what happened in the end. In the race I always rode keeping my distance because the front kept sliding and it was difficult to keep the bike under control, it seemed to race on chewing gum instead of tires. Then the last laps I gave my best to try something, but it was not possible to try any overtakes because he was super-fast, super consistent. Overall, however, I am satisfied with how I did the race, I feel I have improved in my riding style when there are problems with the front ".

With the track in these conditions, with less than exceptional grip, it must not have been easy to keep your concentration high throughout the race while keeping your performance high.

"Yes, there were also some funny moments, for example every time Pecco missed a trajectory, I ended up making a mistake too, our race pace was almost the same, but the most positive thing is that compared to last year, in which at the end of the race I felt physically exhausted, this year I feel much better ".

In the last two races you have scored 45 points, and you have moved to the top of the standings. What emotions do you feel knowing that with these results there will be a lot of your fans waiting for you at the next circuit at Le Mans?

"I can't wait. Aside from 2019, my rookie year in which I was simply trying to get results, it has never happened to me to arrive at Le Mans in these conditions, so seeing the crowd there will be a great experience for me. ".

Last season ended with a duel between you and Pecco. Do you think history will repeat itself in this championship?

"Fighting for the title is already a good feeling in itself. Even today with Pecco, finishing second is still an opportunity to learn something new because unlike in Portugal, here he pushed me to the limit. I think it's great to have a rider of his calibre with whom to compare and improve, but I believe that Aleix will also be able to have his say in this championship. This year he is showing great consistency in terms of results ".

At the beginning of the championship there was a lot of talk about Yamaha's shortcomings, also in relation to the results of the other riders. Are you surprised by the results you still managed to achieve?

"I was already surprised last week in Portimao. My race results up to that point had been ... I don't want to call them disastrous but they were below expectations. With that victory I climbed to the top of the standings. Always finishing in the top ten is certainly a good thing in a championship where every extra point is worth gold in the standings, but to be honest I think I'm already riding at the limit, it's no secret that the Yamaha has some problems, but it's not a problem that I have to think about as a rider. My concern is to keep my concentration high and continue in this direction. "

Now you have raced at a lot of different circuits. Looking to the future, have you already got an idea where you need to be able to push harder and where to be more on the defensive?

"I don't think there will be room to be on the defensive in this championship, I will give my all on every circuit. At Austin I finished seventh and unfortunately I was happy because I didn't think I could give any more on that circuit. I know that I will always have to push to the limit because there are circuits where we will have difficulties, it is a certainty, the limits are there and we know them ".

During the race did the team inform you that Rins, at that moment second in the standings, was out of the points?

"No, also because at that moment I had other things to think about, I was chasing Pecco. The championship is still long, there are still many races to go, and so far the gap in the top five has always been very small".

Last season Pecco managed to make a leap forward with the bike and in the last few races he seemed unbeatable. Does the fact that he made this leap early in the championship this year worry you?

"It's true, I must admit that last year in the last few races Pecco was unbeatable, not only the bike but also in his riding style. This year he is certainly one of the fastest riders on the grid, I can't say I'm worried already because the championship is still long, but I think it will be a good fight. "