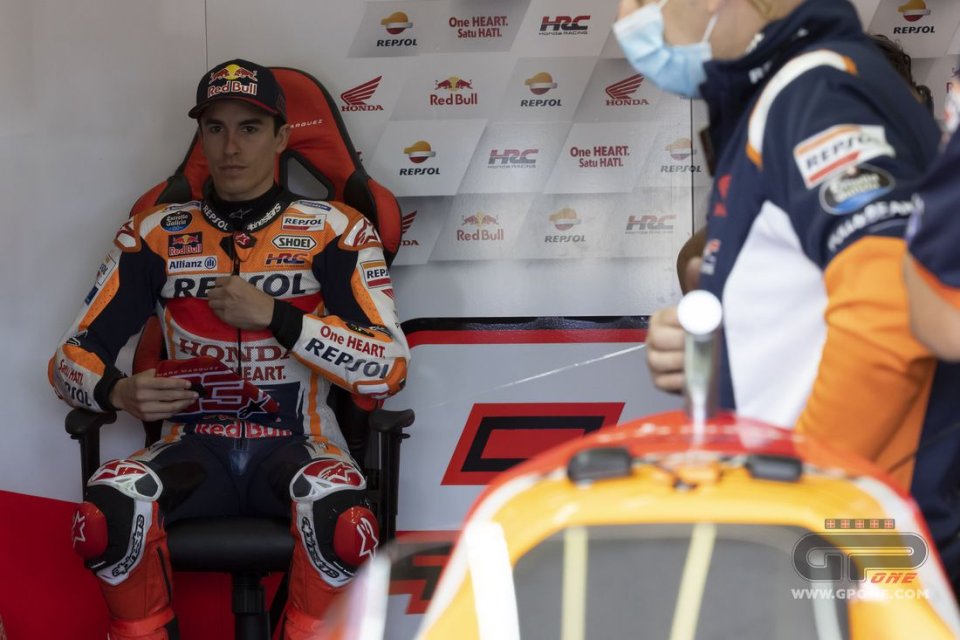 Seeing Marc Marquez fall twice in three corners and finish the first test day in Jerez in 19th place (last of the Hondas, excluding tester Bradl) was undoubtedly  unexpected. Yesterday, the Spanish rider said he would test important changes on his bike but, as we can see from the rankings, they didn’t work.

"In the morning, given the conditions of the track, I rode more or less the same bike as always while, in the afternoon, I began to test  important changes,” Marc began to explain. “Unfortunately, I fell with the bike on which I felt better. We had made a big change on the other, and I couldn’t ride it well. To tell you the truth, even with the first one, I was still a bit far from the best."

Will you continue with these tests tomorrow?
”No, we're going back to the bike we’re familiar with. On Monday, during the tests, we’ll start again."

Have you ever fallen twice in one lap?
"Never,” he said smiling. "But only the first was actually a real fall. The second was due to the track. I didn't expect it. I was going slow on my way back, I was off course to let Binder through, and I ended up on a wet patch. Jerez has this problem in some places. They need to improve for the future."

How did you feel with the "best" bike?
"I always try to ride at my best, but when you don't feel good on the bike, you can't give it your all. After the accident in Mandalika, I told myself that I’d give what I felt like giving, nothing more. But, like I already said, it’s not only about the bike but also about myself. Today, Nakagami is fifth and Pol is seventh. That means that I also have to improve."

Aleix Espargarò complained that you waited for him to get into his slipstream.
“That’s normal with him. He always complains. Instead, he should be proud that someone's following him, also because it’s usually the opposite. When it happened to me, I felt strong. However, this wasn’t the case, because I was slow. I wouldn’t have improved, even with a slipstream. Like I said, I was riding a bike I didn’t like."

How can you improve?
"This Honda is different from the past and needs to be ridden in a different way, but it has potential. It’s the bike we have. Its features won’t change, so I’ll have to be able to adapt to it."