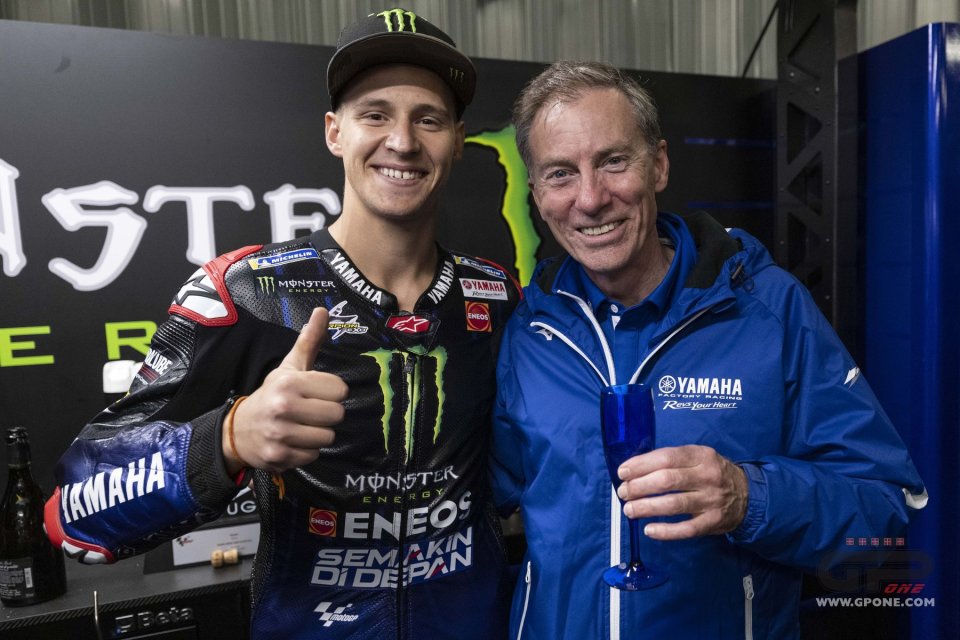 After a lot of speculation, the rumours that Fabio Quartararo is ready to quit Yamaha at the end of the season are ready to be denied. According to reports from our Speedweek colleague Guenther Wiesinger, a two-year agreement has been reached between the Frenchman and the Iwata manufacturer that will keep Fabio on the M1 until the end of 2024.

In an interview with Lin Jarvis, the manager actually confirmed the Frenchman's permanence in Yamaha, thus leaving unchanged a seat in the riders' market which in the event of changes would have set off a cascade effect in the paddock. Quartararo is in fact undoubtedly the prized piece of the riders’ market and seeing him confirmed in Yamaha puts an end to a series of possibilities raised in recent months, which concerned his potential passage to Suzuki or to Honda alongside Marc Marquez.

These are the words of Jarvis, who has envisaged a greater commitment by Yamaha to provide Fabio with a more competitive bike, capable of bridging the horsepower gap that currently sees it far too often at the bottom of the top speed rankings.

“Nobody can guarantee next year's results. No one knows what level we might be able to reach. But I think we definitely fell short of expectations this year. Especially in the areas where progress was most clearly required, i.e. top speed, engine performance and acceleration. We are now working on certain improvements throughout the season. We had something new in Portimão, we have more stuff for Jerez, we have more for the Monday test. We have a plan for this year to make up for our disadvantage as much as possible. But Fabio will not sign with us on the basis of this year's package. It will be about whether he has confidence in our package for 2023 and 2024.

“We were very open and honest with him. We apologized to him for the difficulties we have caused him this year and which are still there. We have explained what our plan for the future is. We have explained this at various management levels. At the management level, at the project manager level, at the general manager level and with us from the team leadership. We cannot speed up the decision-making process. We can't expect to convince the rider within a week. You have to understand it, you have to feel it. But I can feel: Fabio understands that we will come back with the strongest possible package and with an investment that will make all the difference next year.”

Jarvis also confirmed that Fabio's salary will probably be revised upwards and that at the moment the two sides are not yet close to signing the contract.

“There is no doubt: Fabio has that special something. He is capable of squeezing the maximum out of the package. And you always pay a rider for his potential. You're not paying him for past performance. You pay him for possible results in the future. And it's all about the question: What part can the rider add to the technology package with his skills? Our proposal for next year differs from the current package. But we also have powerful material now, because Fabio won the world championship in 2021. I think we will come to an agreement with Fabio, also on the financial aspect. I believe that. I'm confident about that now. I expect the collaboration with Fabio Quartararo to continue for the next two years. At the same time, I would like to emphasize that we are not yet close to signing a contract. There are still some details to be discussed. But I am confident that we can go public with good news in June.