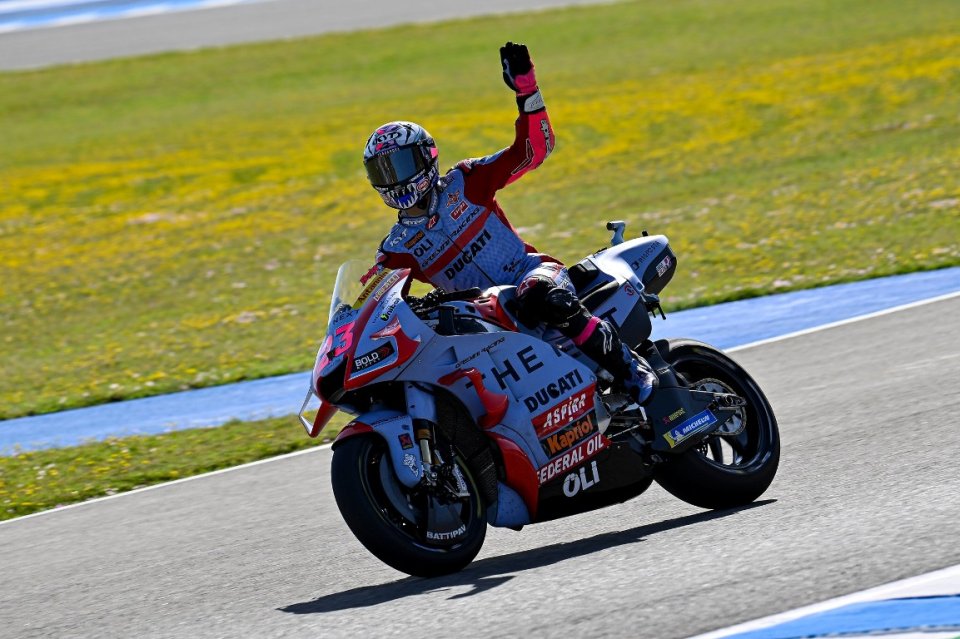 A bitter qualification, to the point of having to settle for an 11th place, accompanied by a fall. Enea Bastianini has to bite the bullet in Jerez, where tomorrow he’ll start from the fourth row. On his part, there’s disappointment, but he doesn’t intend to throw in the towel before the challenge begins.

"I don't know what happened. At turn eight, it closed on me while I was about to open he throttle,” he explained. “And that’s what happened. I was afraid it would close on me, because I don't trust the front, and it did. I don't understand why I can't be laid-back and ride calmly. That's what I'm missing. The warm up will be important to come out of it. I’d like to have a good race. Jerez isn’t an easy track. The race is long. In the meantime, we have to see to fixing things."

So it’s difficult to look at the glass half full.
"It was a bit of an up and down day since, with the soft tire, I was fast, but I didn't feel good riding the bike today. I struggled with the medium, and I don't know why. For tomorrow, we’ll have to do something, since the changes made today haven’t worked."

Enea explained things in detail.
"The soft tire is too soft. The medium for the race is better. We’ll then see what’ll happen in the warm up."

Then he talked about the fall.
"To tell you the truth, I didn't quite understand. In fact, I have to see the data, since I think I behaved like I did in the previous lap. But in some areas, there are patches, and I probably went over them."

And then about the future and what to expect from Ducati.
"Honestly, I don't know, since there's no need for updates at the moment. For the future, we’ll have to figure out whether to stay like this or change something. At the moment, the package isn’t bad."

From what we’ve seen so far, Jerez seems to be putting Enea to the test.
"I don't have a real explanation for my difficulties, since the conditions are different, and the track’s grip has changed a lot between yesterday and today. I think there are some factors that haven’t made me go in the right direction, changing the set-up in an unbalanced way. So we’ll  have to find something that works."

His thoughts then turn to Sunday, with a clear goal to achieve.
"I think it's possible to stay in the top five. At the moment, Pecco, Fabio, and Mir are the fastest. There’s nothing to do right now, but we'll see. It might be warmer tomorrow, but I'm not worried. It might become a problem, but I want to stay calm."

Bagnaia’s Ducati will start before everyone else.
"I honestly didn't think he’d arrive at 1’36”1. He got a perfect lap. He did it really fast, especially in T3, since I was on boardin T1. Without that mistake, maybe I could’ve made it in the top three, but that's how it went."