A week after Portugal, MotoGP remains on the Iberian Peninsula for the Spanish GP. According to the Brembo technicians who work closely with 100 per cent of the riders in the MotoGP World Championship, the Circuito de Jerez - Angel Nieto falls into the category of highly demanding circuits for brakes. On a scale of 1 to 6 it earned a difficulty index of 4, the highest in the first third of the season. The MotoGP riders took part in the tests there in mid-November, finding an asphalt temperature between 16° C and 20° C, much lower than what they will experience in these days. Elevation changes require a manageable and well-balanced bike, as well as stability under braking.

The Circuito de Jerez - Angel Nieto also represents the initial stage of the FIM MotoE World Cup which sees 18 Ego Corsa of Energica Motor Company line up at the start. All of these bikes use the Brembo braking system, starting with the 336 mm diameter and 7.1 mm thick T-Drive steel discs.

Those who go to the track with their super sports bike know that even before searching for more power and torque, you need to upgrade the braking system. The reason is obvious: even the most performing production systems have significant margins for improvement thanks to the products of Brembo's Upgrade Racing line.

When lapping on the track, heavier weight is an obstacle because it increases the lap times. For this reason, more and more enthusiasts prefer discs with a low braking band, including the PISTABASSA, a disc with a reduced height band which as such is lighter than one with a traditional band. 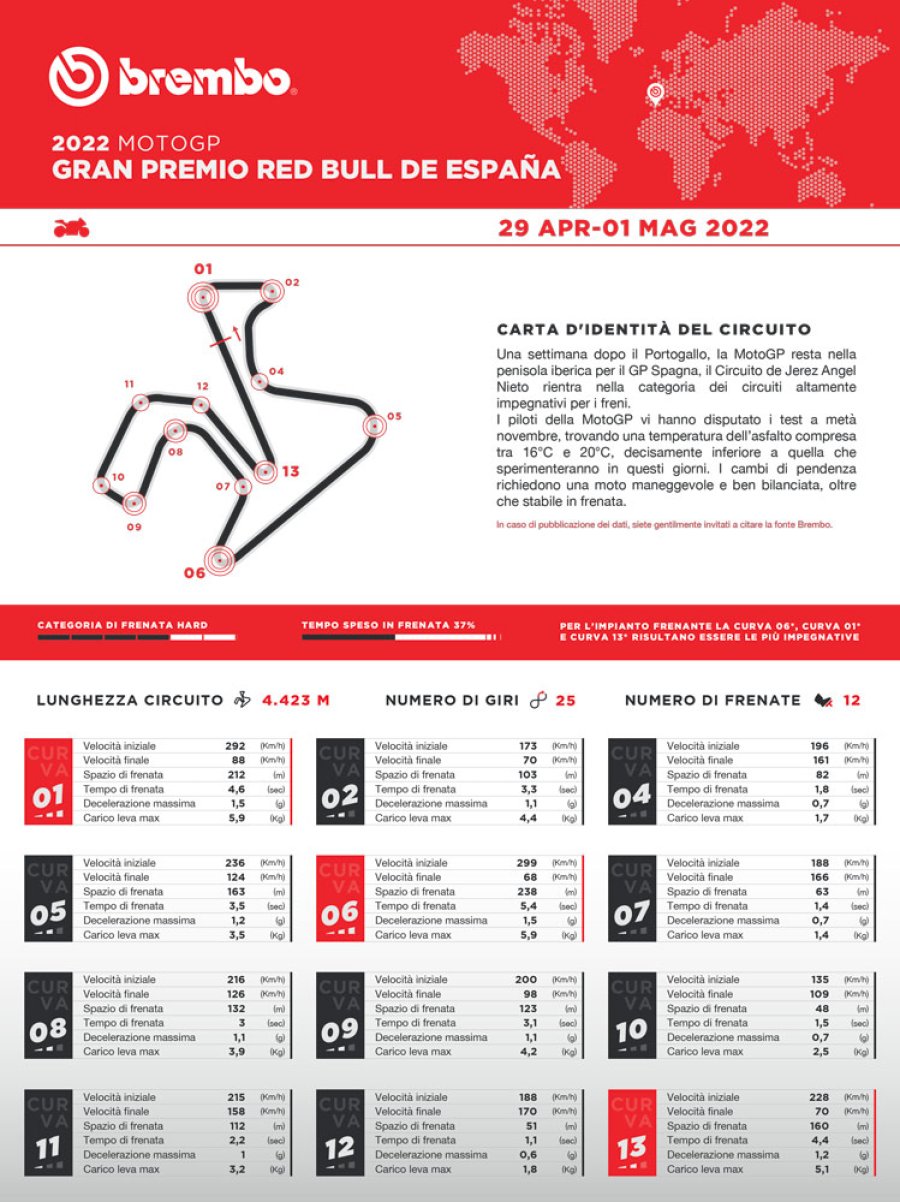 At the Circuito de Jerez Angel Nieto the MotoGP riders use the brakes in all corners, with the exception of Turn 3. On the other hand, braking at Turns 4, 7, 10 and 12 are all below 2 seconds. Overall, the braking system operates for 35 seconds per lap, a record for a track less than 4 and a half kilometres long.

Adding up all the forces exerted by a rider on the Brembo front brake lever from the start to the chequered flag, the value is close to 11 quintals, the third highest figure of the season after Misano Adriatico and Valencia. For each lap the load is 43.5 kg but only in 3 corners of the Andalusian track does it exceed 5 kg.

Of the 12 braking sections at the Circuito de Jerez - Angel Nieto, 2 are classified as demanding on the brakes, 5 are of medium difficulty, while the remaining 5 have a slight impact on the braking systems.

The most complex braking is that in Turn 6: aided by a straight of 0.6 km the riders reach 300 km/h before holding onto the brakes for 5.4 seconds during which they are subjected to 1.5 g of deceleration. They enter corners at 68 km/h after traveling 238 meters exerting a maximum load of 5.9 kg on the brake lever.