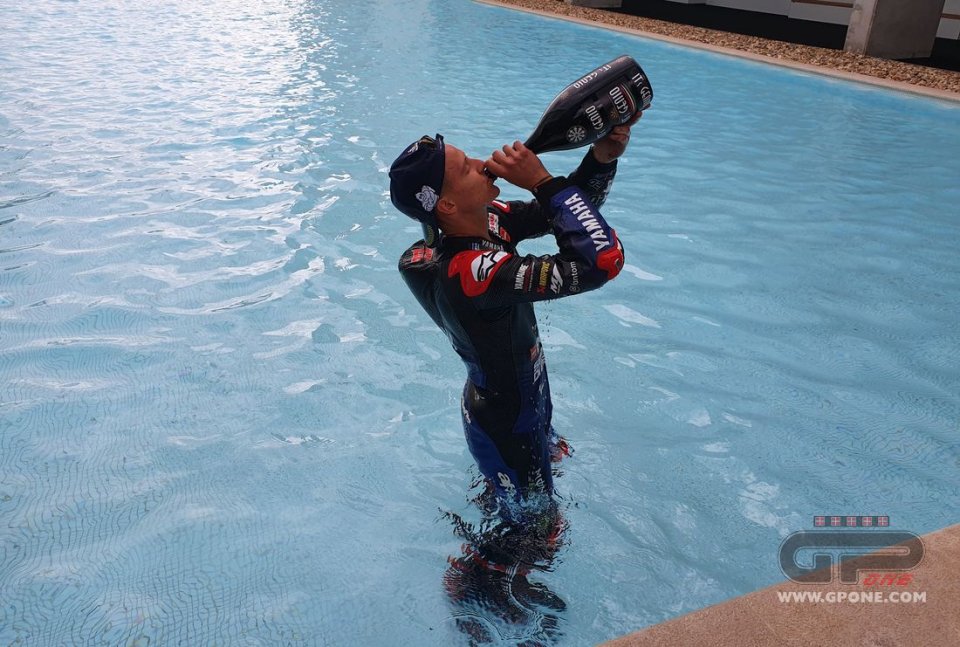 Fabio Quartararo hasn't been on the top step of the podium in MotoGP for almost 8 months, since the Silverstone Grand Prix last August. To celebrate, the Yamaha Frenchman took a dip in the paddock pool in Portimao. Also because first place on Portuguese soil meant that he moved into the lead in the world championship standings (on equal points with Rins).

“It was quite a long time since I achieved the victory - said Fabio - For me it was tough to accept that I was happy to finish seventh in Austin because I improved a lot my race pace from the previous year. So, of course, it’s tough for me to see the team applauding me for P7. But today to fight for the victory again was something special, something emotional because I have always said I will fight the same for P1, P5 or P10.”

Quartararo can't see anything negative looking back at the whole GP.

“It was one of my best weekends since I have been racing in MotoGP - he said - In the rain in FP1 I was 20th, in FP3 one tenth from the best. In qualifying, on wet track conditions, the worst for me, I was fast. Today I knew I had a great pace, but I was surprised to be so fast in the race. I'm happy with how I managed it ".

It seemed as if we were seeing another Quartararo compared to the one in the first races.

“Qatar was tough because last year we won, this year we finished ninth, Austin seventh and last year we finished second – he explained – But I was riding really good, I have nothing to say about my riding style. For sure you can always improve, but here is a track that I like, was from my side a lot of grip. I think the key point for me was the last sector and for me it was the consequence of at this track I felt much better. But nothing really changed. It’s true that today I impressed myself quite a lot to make almost all the race in 1m39s, and if I had the pressure from someone behind for sure I could manage to get 1m39s all the race.”

“Basically, I never the said the bike was not working. It’s true the bike is missing a lot of top speed, but in this track I was feeling not bad with the top speed because in the last corner I was exiting super-fast and out of the hill I was trying to manage to get not a lot of wheelie and I was super strong there – he continued - Apart from this problem, the Yamaha is a fantastic bike, I can't find any other defects ".

Yet the others are way behind, Morbidelli explaining that Fabio's greater experience allows him to make the most of it.

"I got on the Yamaha in the same year, I don't know why I should have more experience than him - the Frenchman had a little dig at his teammate who was only 13th today - The other riders always talk about the lack of grip as our problem, it's clear that everyone wants more traction, but that's not the problem, if anything it's a result of the lack of top speed ”.

In any case, what is certain is that Fabio is now making a difference, both in the GPs where he has to suffer and in those in which he can win.

"In Austin I started knowing I could not aim for victory, but I told myself that I would still give 100% in any position I was in - he said - In 2020 when I had some drops they were very big, while now I am fighting for a 7th place as if it were for the podium. This has been the biggest change for me, already last year, in Jerez when I had the problem of compartment syndrome, I finished the race anyway, because 3 points might have been important. Even disappointing results pay off at the end of the year ”.

The last question was about his future and if this victory will make it easier to decide whether to stay or not? "No" was Fabio's reply, before he burst out laughing.