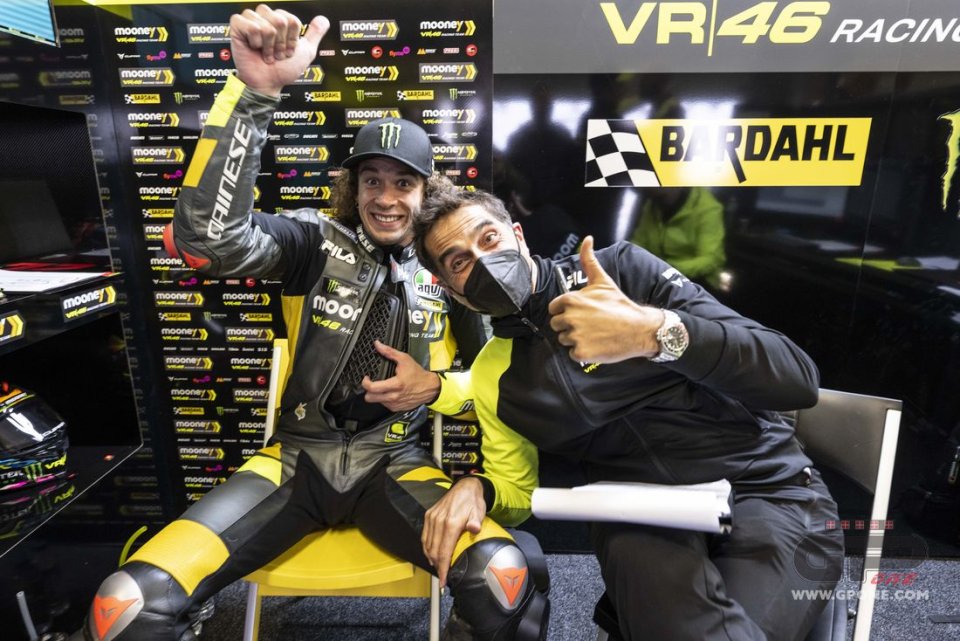 Everyone was expecting to see Bastianini’s and Bagnaia’s Ducati in first place in Portimão, but Bezzecchi’s Ducati will be first instead. The VR46 team’s rider will start from the second row. A nice gift for  his “boss”, Valentino Rossi, who was visiting the garage for the first time. Marco wasn’t able to prove himself in wet conditions, and especially in the decisive 15 minutes of qualifying, the first in which the riders were able to use the slicks during the Portimão weekend.

“I knew I could be fast on the wet asphalt, because I've always been fast in other classes, even though I didn't know how fast. A sixth place is more than I expected. I don't know why it's so competitive, maybe because you have to take risks in those conditions, and I'm good at it,”  Bez said jokingly.

Did having the “boss” by your side help?
"It's always nice to have Vale here. He spent a lot of time with us and also got on the track to see us ride.  When he's out in the paddock, he has to sneak around like a thief, but he's relaxed in the garage. He told me I'm doing fine, even though I sometimes take a few too many risks, and he's right. It's cool to have him here. He has a very special way of explaining things."

Was it a totally positive day?
"I'm really happy today. I already was this morning, before the fall, but I still struggle to find the limit when it’s wet, and I entered the corner a little too fast. It was a bigger mistake than yesterday, because there was no need to push so hard. It wasn't needed. I wanted more, and I fell. I'll take it as a lesson for the future."

You've never been so far ahead in the MotoGP.
"First of all, it means I'll have to have a good start, which I've never had in the race. Being ahead helps to avoid being in the mess, but we’ll have to work well tomorrow morning to get a good pace. Otherwise, it’s easy to end up in back quickly. Everyone’s all very  competitive in the first laps."

Do you have a goal in mind?
”I still don't know what to expect. We haven’t ridden much in dry conditions. I’ll be hard even tomorrow morning to figure out what I can do on distance. In the end, my goal is always the same. Try to take home some points and gain experience. The tracks on which I managed to have a good pace were those where we were able to work a lot. Having little experience is more complicated. Looking at last year's data, this track doesn't seem to wear out the tires much, so you can push from start to finish. I can try to be fast.”

Let's put it this way: tomorrow night you’ll be happy if...
"Ending up in the first ten would be fantastic, from tenth to fifteenth very good, below fifteenth ... we’ll try not to throw anything away."

Are the tires a big variable?
"Looking at last year's race data, the safest choice would be the rear medium. After a few laps, the soft had already dropped today. For the front, it’ll depend a lot on the temperatures. If they’re low, the soft is the best, but it moves a lot. We’ll have to wait for the warm up and then decide."

His wife posted about his condition: “He is okay and in the best place possible. They will keep him in for a few days to monitor him.”
1 hour 18 min ago

Peter Oettl merges with Intact GP. The Swedish brand Husqvarna will race in Moto2 with Darryn Binder and Lukas Tulovic and in Moto3 with Ayumu Sasaki...
1 day 5 hours ago