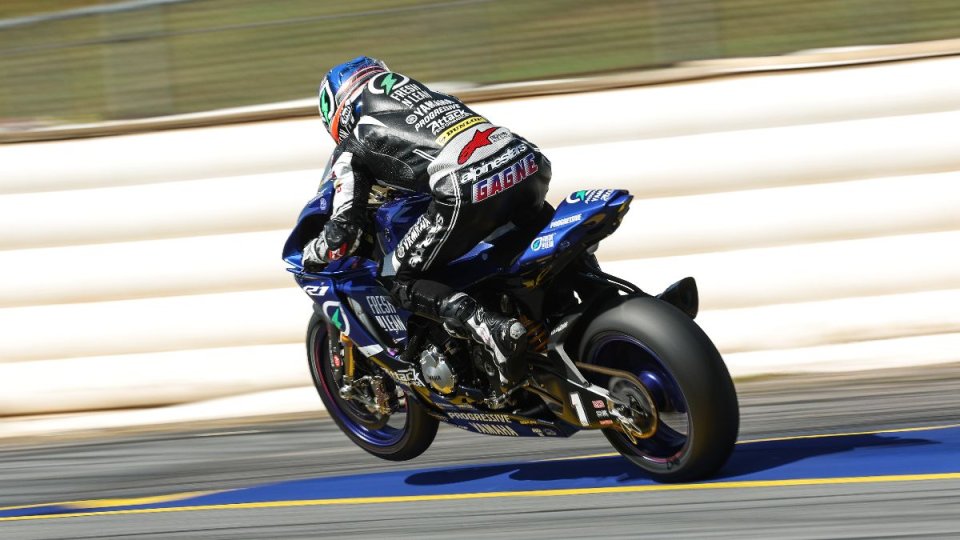 Fresh N Lean Progressive Yamaha’s Jake Gagne suffered through a difficult weekend in the season-opening round of the MotoAmerica Medallia Superbike series at Circuit of The Americas two weeks ago and on the Friday in Texas, his qualifying session was aborted with mechanical problems before it really started. But that was then, and this is now.

Gagne and his Yamaha YZF-R1 were up to their normal tricks at Michelin Raceway Road Atlanta with the defending MotoAmerica Superbike Champion ending opening day as the fastest of the fast with his 1:24.247 in Q1 to put himself on provisional pole position.

“It was a good day,” Gagne said. “Honestly, the bike is feeling really good and, after a weird weekend at the first round, we’re back in shape. Kinda of like always, we’re focusing on getting ready for the race, doing some longer runs, and just seeing what lap times come. Just getting ready for the race, that’s the priority and being in good shape there. It’s pretty good. When it gets hot in the afternoon, it gets a little greasy so I think most guys would agree that there’s a little bit better grip when we ride in the morning. It’s the little things and not a big deal. Yeah, we can go faster tomorrow. I think everyone will go faster soi I think we’ll get a softer Dunlop in the morning. Like I said, the race is what matters. We’ll do our job and focus on what we need to focus on and be ready to go.”

Gagne led Westby Racing’s Mathew Scholtz by just .223 of a second under sunny Georgian skies with Warhorse HSBK Racing Ducati NYC’s Danilo Petrucci third-fastest in his Road Atlanta debut. Scholtz’s best lap was a 1:24.470 on his 13th lap with Petrucci, on form after winning both races at COTA in his MotoAmerica initiation round two weeks ago, lapping at a best of 1:24.585.

Vision Wheel M4 ECSTAR Suzuki’s Jake Lewis was 1.2 seconds off Gagne’s best with the fourth-fastest time, the Kentuckian half a second ahead of Tytlers Cycle Racing’s Hector Barbera with the Spaniard fifth on his BMW M1000 RR.

The Wyman brothers were next with Travis leading Kyle by just .001 of a second for ninth on the provisional grid on his Tytlers Cycle/RideHVMC Racing’s BMW. Kyle Wyman, meanwhile, is riding in place of PJ Jacobsen with the New Yorker testing positive for COVID-19.

Warhorse HSBK Racing Ducati NYC’s Josh Herrin had a big crash during Supersport Q1, but still managed to hold on to provisional pole by virtue of his 1:29.430, which put him .110 of a second ahead of North East Cycle Outlet Racing’s Benjamin Smith. Landers Racing’s Rocco Landers ended day one in third with class rookie and non-defending SportbikeTrackGear.com Junior Cup Champion Tyler Scott fourth fastest. In post-qualifying tech inspection, however, Smith’s Yamaha was DQd, moving everyone up a spot.

In SportbikeTrackGear.com Junior Cup action it was Cody Wyman in control, the Alpha Omega-backed rider leading Max Van by .928 of a second in Q1.