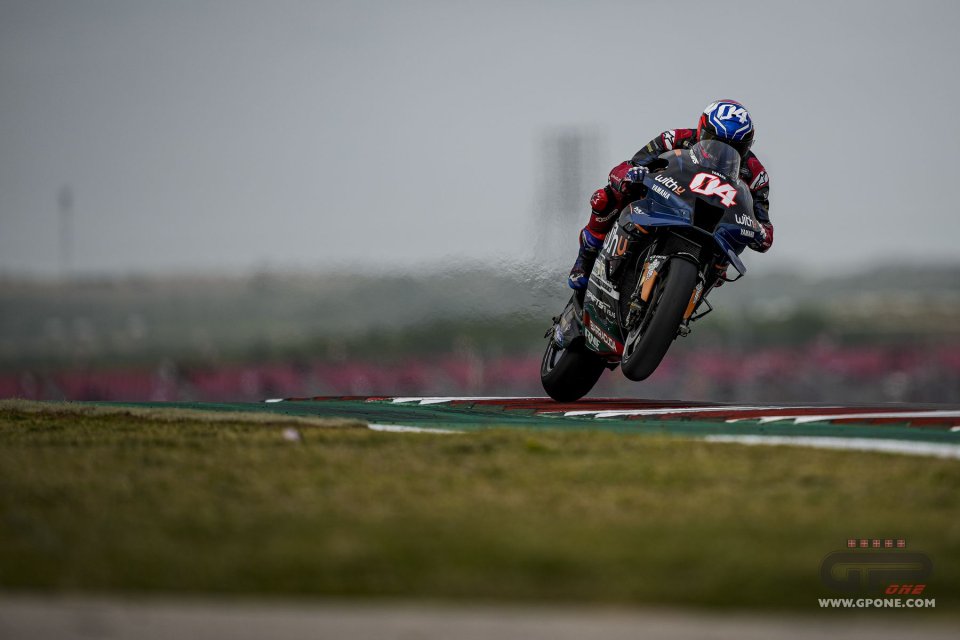 Andrea Dovizioso is facing a more complex challenge than he could have imagined when he decided to return to MotoGP and to do it on a Yamaha M1. The Iwata bike had left a very sweet memory with Dovi after the splendid 2012 season, but between the end of 2021 and the beginning of 2022, the truth about the current state of competitiveness of the Dovi-M1 pairing has manifested itself, leaving both parties dumbfounded.

There have even been some crazy rumours on the web saying that the two parties have decided not to continue with the contract that binds them until the end of the year, but Dovizioso himself put the record straight in the meeting with today's journalists before the Portimao Grand Prix, MotoGP’s first round in Europe. Andrea also revealed some very interesting background information regarding what happened at the end of the US round of the championship, which certainly wasn't particularly positive.

"As I've always said, I'm not here to be so far behind and I'm very angry about it - said Dovizioso - I want to stay in front, but you can't understand how things will go before getting on a bike and I think Yamaha is suffering in this period, even if Fabio is showing that you can still be fast with the M1. You can therefore be fast, but as they confirmed to me, when we had a meeting, they know very well that the M1 is behind. I had a meeting today with them, with the Project Leader, and it's nice to work with them because they are open to dialogue. They realized the reality of the situation, and they apologized for there being so much of a gap in America. They understood the situation and together we will try to improve it ".

But is this Yamaha so different from the one you remembered?

"In my opinion, if I compare this bike with the 2012 one, the DNA of the Yamaha is very similar. This bike is no worse. It has the same strong points, but the negative points are even worse than before. Then our rivals have improved and this creates this gap. Fabio, who did an incredible world championship in 2021, is also suffering ".

Have you identified what can be done to improve the situation?

"You definitely need something on the frame. But not to fix the problem entirely, because the engineers don't have a magic wand to fix things, but it takes changes to understand. When a problem is big you have an advantage in identifying it. I think it's easier to find a solution, but you need to do big things, which means identifying what to change, producing it and Yamaha has to make less conservative decisions than in recent years. I have no power over this, but I've been clear on what I believe in. "

Dovizioso: "If you have a big problem, it's easy to spot it. But then you also have to solve it"

Why hadn't anyone identified these problems before?

"I think that when a rider races on the same bike for many years, he realizes a little less what the problems are. But just because it's normal for this to happen, it has happened to me too. The rider gets used to and adapts to everything, some better, some worse. But this is the attitude. The first feedback that a rider gives you when he changes bikes is the true one. Much more than those of the riders who have been racing there for three or four years. Maybe they see the problems, but they don't understand how big they are. "

What have you got to say about the rumours that they would like Dixon in your place before the end of the year?

"I don’t give a shit, as always! We're talking about nothing, that’s often how journalism works. I'm not really thinking about ending the season or not, now I just want to improve. I had a meeting with Yamaha, but if someone looks at the headlines he might think that there is not a good relationship with them. But the reality is that they know the problems very well and they want to collaborate with me, because they know we can do something good together. I have the experience to help Yamaha, on the subject of Dixon I don't know anything and I don't think there is anything. When you race for Yamaha, you can't worry about these things, because they don't happen. A lot of this is today’s journalism. From an article of a single person's thought, the thing always gets bigger, making it seem true, when there is nothing true. It's funny, but I know it and it doesn't affect me. Unfortunately people still don't understand that many people do journalism like this, sometimes ".

Do you think you have at least improved on the M1?

"We have not improved as much as I wanted. As I have said many times, it is difficult to change my riding style and I am suffering. Sometimes I am close, but I still cannot exploit the potential of the bike. Fabio is showing how to do it, but if you don't ride like he does, it is difficult to be fast with the Yamaha right now. But we keep working, we try to adapt the bike and then we want to help Yamaha develop this bike. They have realized how important it is to work during the season and I'm trying to do it."

After experiencing it, do you think it is more difficult to switch from Yamaha to Ducati like Lorenzo did, or vice versa?

"I don't think it's more difficult to switch from Yamaha to Ducati or vice versa. At the moment everyone in Yamaha is suffering, even the world champion. There are problems that arise in all situations and on all tracks."