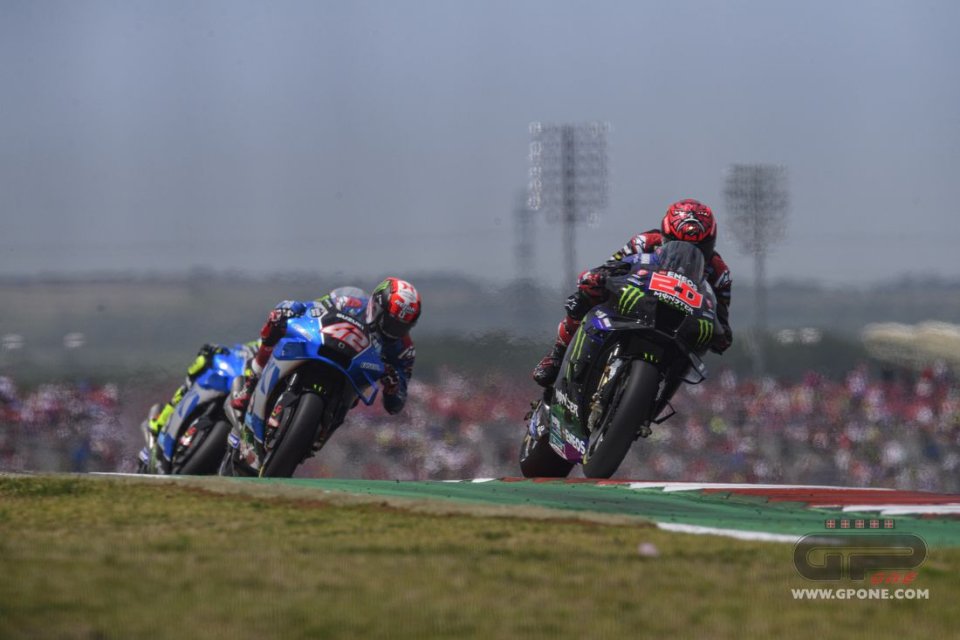 After each race, Fabio Quartararo always hears himself asked the same question: when will he decide his future. In Austin he cut short: "I will decide soon, before the summer". Enough time to evaluate the various offers and understand the real level of the Yamaha. Because the first races on the M1 have probably given Fabio some sleepless nights: 9th in Qatar, 2nd in Indonesia (in the wet, however), 8th in Argentina and 7th in the United States.

That’s certainly not the roadmap of a world champion, but the worst thing (evaluating the competitiveness of the M1) is that the Frenchman was clearly better than all his other brand mates. At Losail the best of the others on Yamaha was Morbidelli with 11th place, at Mandalika again Franco (7th), at Termas de Rio Hondo Quartararo was the only one to score points, while at Austin Dovizioso picked up one by beating Morbidelli in a sprint finish.

So far it is clear how much Iwata needs Fabio. Last year the Japanese manufacturer moved in advance, locking down Franco up to and including 2023, but the Italian at this moment has plunged into a crisis that is difficult to understand. In the satellite WithU team, there are no alternatives: Dovizioso due to evident age limits, Darryn Binder because he is far from still being an attractive rider for an official team.

Yamaha, therefore, rather than wanting to, must convince Quartararo to stay. Hoping that with the arrival in Europe, the M1 will return to its usual level and, in this sense, Portimao and Jerez will be two very important proving grounds.

But if Fabio decides to seek his fortune elsewhere, where could he go? Certainly not in Ducati. In Borgo Panigale they have already chosen Bagnaia for the future and are spoiled for choice as to who to support him, with Bastianini and Martin the two most eligible candidates.

KTM would have the budget to entice the Frenchman, but not yet a consistently competitive bike. Aprilia is improving, but it is still not enough for a world champion, in addition to the fact that it is unlikely that they could afford to sign the Frenchman in Noale.

And so we come to Honda, whose name has been linked to Fabio's for a few months now. Undoubtedly a fascinating idea, but highly unlikely to go ahead. The main problem is called Marquez, and not because he vetoes his teammates. Wearing HRC colours means entering Marc's house, in every sense. A number 1 does not want to be number 2 and challenge Marquez in his field; although it may be an attractive idea, it could turn out to be racing suicide even more than a gamble.

It would be good for a rider who is on the up and who wants to test himself in the best team in MotoGP (such as, for example, Martin or Bastianini) but not for a world champion.

All that remains is Suzuki as an alternative to Yamaha. A motorcycle very similar to the M1 (both have an in-line 4-cylinder engine) but it does not have its weaknesses. First of all, top speed (Fabio's real worry, and not only that), a problem that Hamamtsu has shown that they have known how to solve brilliantly. From a riding point of view, it would be the least traumatic passage, Vinales, who made the reverse path, was immediately a winner with Yamaha. Furthermore, with the arrival of Livio Suppo, Suzuki has once again strengthened its structure from a managerial point of view after Davide Brivio bade farewell.

Maybe there would be one problem: that of his retainer fee. Quartararo does not come cheap and Suzuki has always been careful in its investments. A possible solution could come with help from Monster, a joint sponsor of the team and rider. In this way, the final obstacle could be overcome.

Provided that Quartararo really wants to leave Yamaha. The first European races will help him find out, there are a lot before the start of the summer...