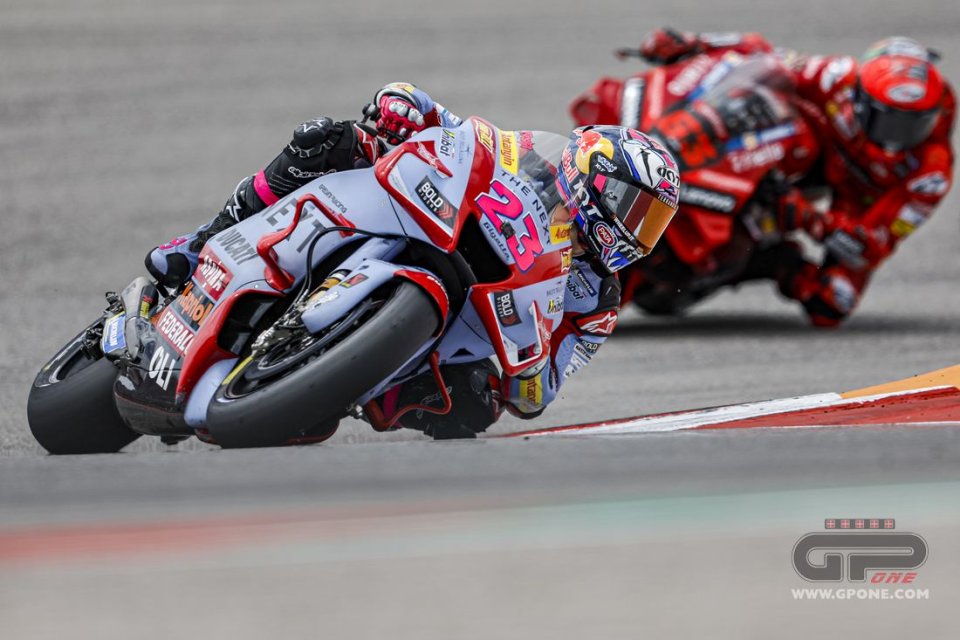 In front of everyone in the riders' championship there is a Ducati, but it is not a shiny new GP22, but an older GP21 (albeit with some updates) ridden by Enea Bastianini. That a safe used vehicle is better than a new one at all costs is not so unusual in MotoGP. Just ask Yamaha, which in 2020 saw Franco Morbidelli conclude the championship in 2nd place with the M1 of the year before, with all due respect for the factory team.

History therefore seems to repeat itself, although in this case it is still difficult to say whether the old bike is better than the new one. Bastianini is riding a Desmosedici that has benefitted from two years of development (due to the freezing of engines for Covid), which at the end of 2021 had become almost unbeatable in the hands of Bagnaia, who won 4 of the last 6 races, finishing on the podium in another and crashed when he was in the lead in the last one.

Ducati GP21 and GP22: so similar, so different

There is no doubt about the quality of Enea’s light-blue bike, but the latest version should always represent an improvement on the previous one, as one would imagine. Isn’t that the case?

The comparison, it must be said, is slightly unfair because, in addition to Bastinanini, the other two GP21s on the track are in the hands of rookies, Bezzecchi and Di Giannantonio. On the other hand, there are 5 GP22s, with some differences between them. Starting with the engine, because Bagnaia and Miller have chosen a sort of 'hybrid' version, with some components of the previous year inside that should smooth out the power delivery, while Marini, Martin and Zarco use the V4 in 'full' 2022 version.

Then there is the front lowering device that has been so controversial (and which will be banned starting from next season), the one that can also be activated during the lap. After using it in the first Qatar GP, Bagnaia and Miller abandoned it. Not because it didn't work, but because it still needs to be fine-tuned. In a nutshell, its intervention was not always homogeneous, causing the riders to lose confidence in the front end. In the Pramac team's garage, however, that system is still there and it is mainly Zarco who uses it.

Enea beats everyone in the race, Martin in qualifying 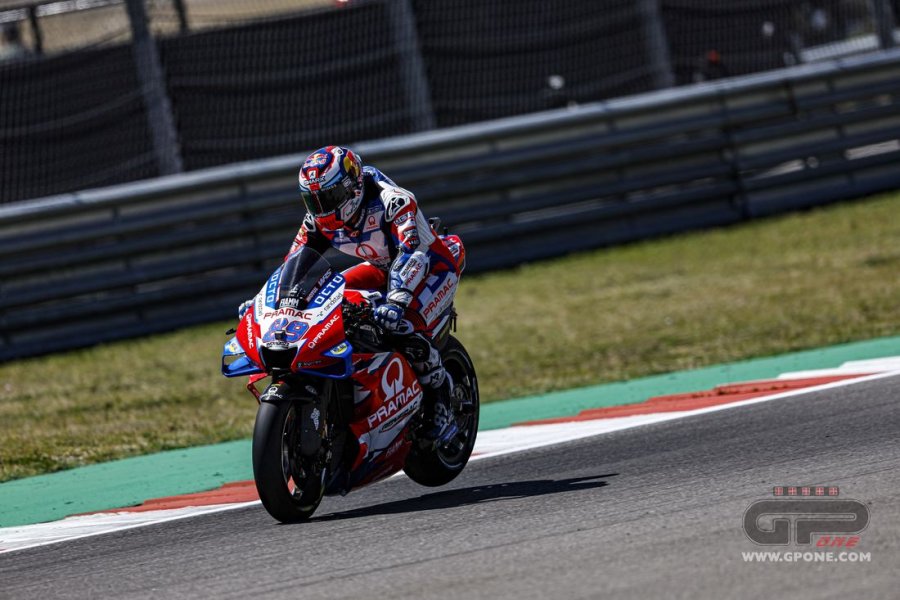 Having analysed the technical picture, let's move on to a back-to-back comparison. Starting from the races, where there is a substantial draw. Bastianini finished ahead of the GP22s in Qatar and Austin, where he won. In Losail, the first official bike at the finish was Zarco's (Bagnaia crashed taking Martin to the ground, Miller retired due to a technical problem), more than 10 seconds behind the rider from Rimini. In Texas, on the other hand, he was just over 2 seconds ahead of Miller, with him on the podium.

The race in Indonesia, on the other hand, was in the wet, the Beast's weak point. In fact, he finished 11th, almost 30 seconds behind Zarco (on the podium), more for his demerits than for the bike. Argentina was also a complicated weekend, so much so that the first GP21 at the finish was that of Bezzecchi, 9th in the sprint finish ahead of Enea, and about 12 seconds behind Martin (2nd on that occasion).

In qualifying, however, the GP22 inflicts a 4-0 result over the previous model, but in this case it is more thanks to Martin than anything else. Jorge is a flying lap specialist and in the first 4 GPs he started twice in pole and as many in second place. On the contrary, Enea only this year managed to express himself at his best in qualifying, starting from the front row in Qatar and from the second in Indonesia and the USA.

Ducati unbeatable on the straight, regardless of the year

Now let's try to compare the two engines and we can do it by looking at the top speeds reached over the weekends. In Argentina Bastianini had managed to reach 355.2 km/h, while Bagnaia 352.9. In Indonesia, there were even two GP21s ahead of everyone: Bezzecchi with 315.7 per hour followed by Enea with 313.9, while the best GP22 was that of Zarco (313).

In the Argentine GP the 2022 Desmosedici took its revenge thanks to the 345.5 km/h of Bagnaia against 344.6 of Bastianini. It was a draw in Austin: 350.6 for both Bastianini and Miller.

The game is over and the differences are so small that you can't decide a winner. Or rather, there is a winner and it is Bastianini. In MotoGP the rider is still able to tip the balance and that's what Bastianini is doing regardless of his technical equipment.

The GP22 is certainly a still young bike, which the riders have not been able to fully understand yet, but it can be said that it is at the level of the GP21. Furthermore, it has yet to express its full potential, which according to Bagnaia is higher. As the season progresses, overtaking the Desmosedici will easily happen, but it's hard to say how big a margin there can be.

Bastianini said that the differences between the two bikes are not huge and the official riders have confirmed it, but in current MotoGP even a tenth per lap can turn the tide of a race. What is certain is the consistency of Enea, the only rider not only to have won two races, but to have been on the podium twice in this early stage of the championship. With 17 races still to run, everything is wide open, but as they say ‘a good start is half the job’…

Bastianini: "I haven’t signed with Ducati, but I got what I wanted"