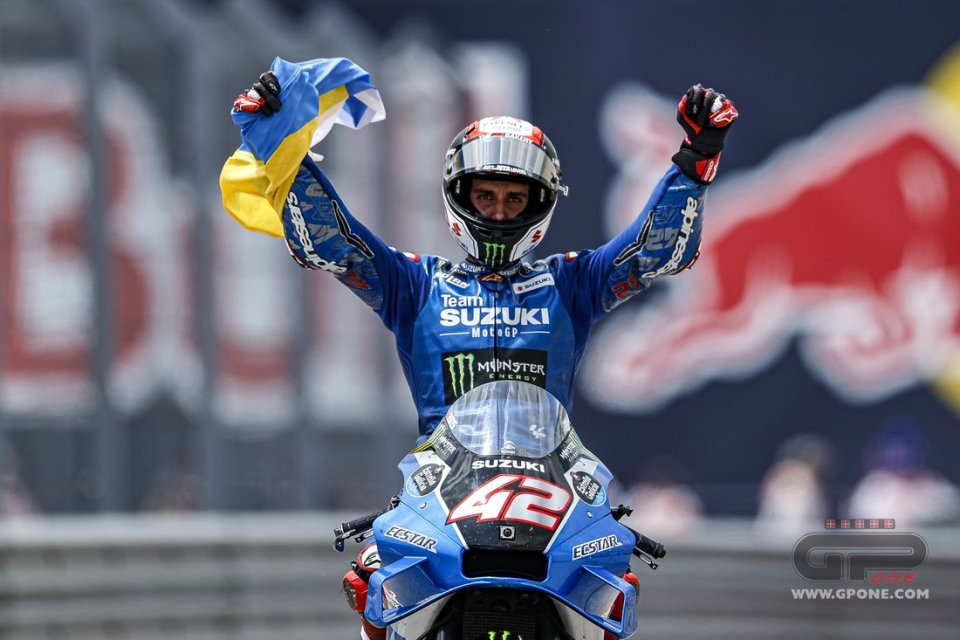 Suzuki celebrates its 500th MotoGP podium thanks to Alex Rins' stunts. In Austin, the Spanish rider, who started 7th, quickly proved to have a good pace in free practice and, lap after lap, he attacked the Ducati train. Only Enea seemed to be able to contain Alex’s attacks. In the last laps, the Italian rider took the lead in the race, and that’s when Alex’s duel with Miller began. The Australian rider defended his second place tooth and nail but gave in right at the finish. Rins came in second and brought his Suzuki to second place also in the rankings.

"I didn't expect to get on the podium,” Alex confessed. “I knew that starting in the third row and having to recuperate positions wouldn’t be easy on this circuit. I tried pushing to the limit by braking hard on the front. Enea was smart. I think the moment I caught up to him, he was maintaining the tires, but when he noticed I was behind him, he started to push, and I had no way of keeping up with him. At that point, I tried to keep my race pace high, so when I saw Jack in front of me, it wasn’t easy to try to pass him. He’s also a bad ass and brakes hard. I gave it my all at the last two corners. I managed to brake where I wanted and to hold the bike, and I passed him. It was a good race."

This is the 500th podium for Suzuki. Both you and Joan are demonstrating a good level with good results in this start of the season.
"Compared to last year, we’ve improved. The engine of the new GSX-RR has improved, and now we’re faster, but we still have a lot to improve on. We still have some issues we’re working on but, overall, I’m happy with this result, both for me and for Suzuki in general."

Where did you take advantage of the Suzuki to break through the Ducati wall in front of you?
”In the first sector, at turns three to six.  I was able to be really fast and recuperate a lot of time compared to the front group. I think that part of the reason is thanks to the new Suzuki frame. It allows us to be agile in that type of sector, while we still lack something in acceleration. I was also surprised by me. I managed to brake really well at turn eleven where I made some good passes."

Compared to last year when you fell a lot, in this start of the season, you’re proving to be among the strongest. Is this the real Alex Rins?
”I think we worked really well both in the garage and out before the season. I prepared myself hard this winter, and I believe that all these factors together are showing the results of our work. Now we can be consistent in all the races. I think that, even in the last circuits, we’re facing the race weekend better, but we’re still at the beginning of the championship. There are still many races left, so we have to continue working to improve our weaknesses."

One of the Suzuki’s strong points is managing tires. Was it even more so here, or did the set-up play a biggher role?
"I think this advantage has decreased this year, since Michelin brought these new tires. Both set-up and managing the tires have certainly had a bigger influence in this race."