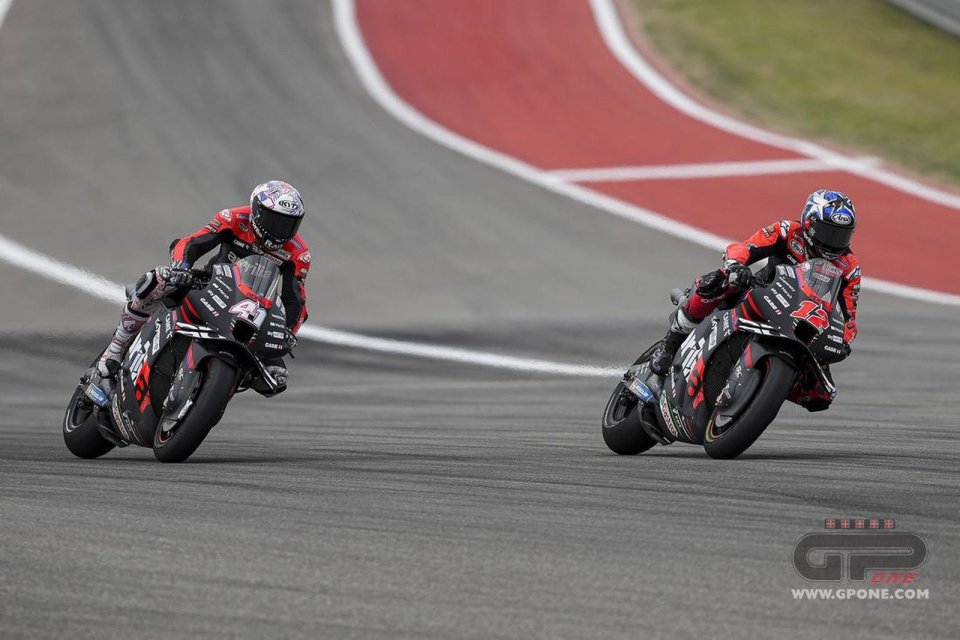 It was a bit of a bleak Sunday for Aprilia at the Circuit of The Americas in Austin, a track historically unfavorable to the characteristics of the RS-GP due to its typical inclines and related low speed pick-ups when exiting the corners. Aleix Espargarò is fully aware of this, and it proved to be true during today's race, which saw him unable to go any higher than 11th place, more than 12 seconds behind the winner Enea Bastianini. Nothing in common with last year, when the Spaniard fell five times in just three days.

"I'm not happy at all because this year we have raised the bar very high, this is good and bad at the same time. Having a race like today after winning, you clearly can't be happy. Although here in 2021 we finished in 20th place and today in 11th place", he admitted.

The results meant that the 32-year-old is no longer championship leader, but what is certain is that the 2022 calendar has another 17 rounds...

"We knew it wouldn't be a walk in the park given the stop-and-go layout and performance of the recent past, the weekend's performance confirmed it. But the same thing happened to many other riders, except of course Bastianini and Rins, it is no coincidence that we got close to Martin even though he started from pole. The championship is long, what happened today does not change our goals at all. In Europe we will find better circuits for our bike ”.

In the final stages of the race, Aleix was then overtaken by his compatriot Marc Marquez, the protagonist of a furious comeback from the rear due to a problem on the bike when the lights went out.

“Marc was very competitive, when I found him behind me I preferred to be smart and not fight with him because he had an edge over me. I tried to follow him to gain ground on his pursuers, I must say that he is really good at stopping the bike and restarting it from low speed. Without that problem at the start, I am convinced that he would have fought for the victory”, he declared.

Vinales: "The best weekend since I've been in Aprilia"

Maverick Vinales, on the other hand, finished the race for the first time in front of his experienced teammate, in tenth position. A performance that confirms from every point of view the progress made by Maverick starting from the second half of 2021, even if the Spaniard cannot hide a bit of disappointment for not having been able to put together a good lap on Saturday to get into the decisive Q2 session.

“Up to now it has been the weekend in which I had the best feelings on the bike. I'm disappointed because we had the pace to aim for something more concrete in the race, at the level of the top-5, unfortunately the bad qualifying on Saturday penalized us. This is racing. Although the road is long, we are still working in the right direction and after each exit I’m learning more and more about the behavior of the bike itself. The potential is there and in these first few races we have shown it," he said.