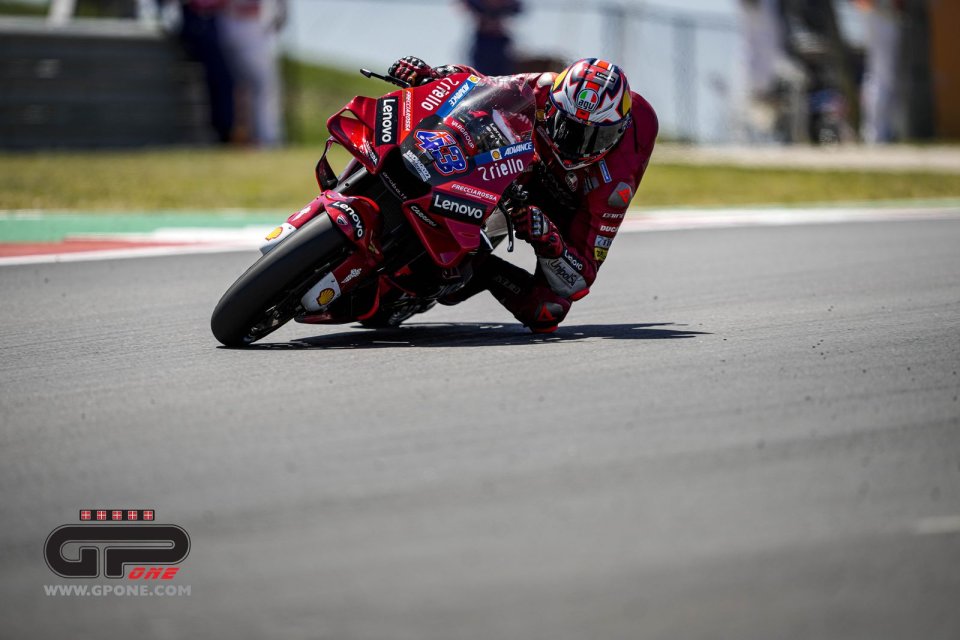 He might have been unable to take pole, Jack Miller, beaten by his brand-mate Jorge Martin, but he did at least manage to put his wheels ahead of those of his teammate Bagnaia. After his unsuccessful weekend in Argentina, the Australian seems much more at ease in America on the Austin circuit and after the race he gave rise to a nice little interlude with the Spanish rider.

"Yes, it's a question of mental state, concentration - the Australian rider explained - in Argentina we had some difficulties but we moved on and since we arrived everything has worked perfectly. I feel I have the right feeling on this circuit, I pushed the bike to the limit and even managed to improve my previous record at this track. But the other Ducati riders also did very well, five Ducatis in the first two rows is a very good result for the brand. In the past we have had problems here, especially because of the wind that caused problems for us with the lines. It is proof that the bike has improved, now with the new aerodynamics that problem has disappeared ".

In Q2 in the third sector you were really strong, what is this advantage due to and what do you expect in tomorrow's race?

"Generally I rely a lot on the rear brake in that sector, it helps a lot, the fourth sector is not my forte, those wide corners are not my style. As for the other guys, I certainly prefer to race against bikes whose potential I know, unlike those of other manufacturers that can suddenly appear from around the corner without you expecting it ".

Today it seemed that the other manufacturer bikes suffered more than you at the front, it seems that the Ducati 2022 is now at a good point with development or is there still something to work on?

"I think every bike has its problems - Jorge Martin intervened alongside him - in FP3 I had some problems with the soft but with the hard compound I had no problems".

"I can't speak for the other brands - continued Miller - but my bike didn't give me any problems in that sense. As for the development of the bike, it is normal that it takes time. Everyone has been talking about it since the first races and now it seems that things are improving, I think it's normal ".

In tomorrow's race, is there anyone among your rivals that you will keep a closer eye on? It seems that Bastianini has a little bit more than the others.

"Compared to me, perhaps Enea has something more on the straight - replied Jorge - but I think that Pecco also has something more in other sectors. Tomorrow with the team we will try to refine all the details during the warmup to better prepare for the race".

"For sure Enea has been riding very well in the last few races - Jack then intervened - and he often came close to the podium also last season, but Pecco also has an excellent race pace. After all, they are MotoGP riders, the best in the world, it's normal that the level of competition is so high. No one has mentioned Marquez yet, yet he has been the undisputed king of this circuit for many years. This weekend he has not yet shown what he is capable of but I am sure he will be there too tomorrow. One thing is sure, it will be a good show for the fans."

What is clear is that it seems that Ducati has more than the others over one lap. What are its strengths?

"It certainly has good riders! - Jorge continued to joke - but I think that having good speed and excellent acceleration, beyond the whole package as a whole, are a great strength to be able to get a fast lap".

"It's hard to say looking at just one lap - said Miller - so many things can happen in one lap. I have done a lot of qualifying but I haven't managed to get many poles, and it's not that I don't want to. In this case, for example, we have very similar bikes, it’s just that the bike is not everything, some riders are able to find the times more than others, riders like Fabio or Jorge, but overall Ducati certainly has an excellent package ".

Having five Ducatis in the front rows can be a special result from a certain point of view, but also an added difficulty in the race.

"I would prefer to have to race against a Ducati - Jorge said - simply because it's a bike I know better than the others, but the level of the bikes this year is very high in general so I don't think it changes much which bike you race against."

"It's like in Moto2 - Jack Miller continued - everyone there has the same engine and the same chassis more or less, and the races are still interesting. So here in MotoGP it's the same thing, it’s the rider that makes all the difference ".