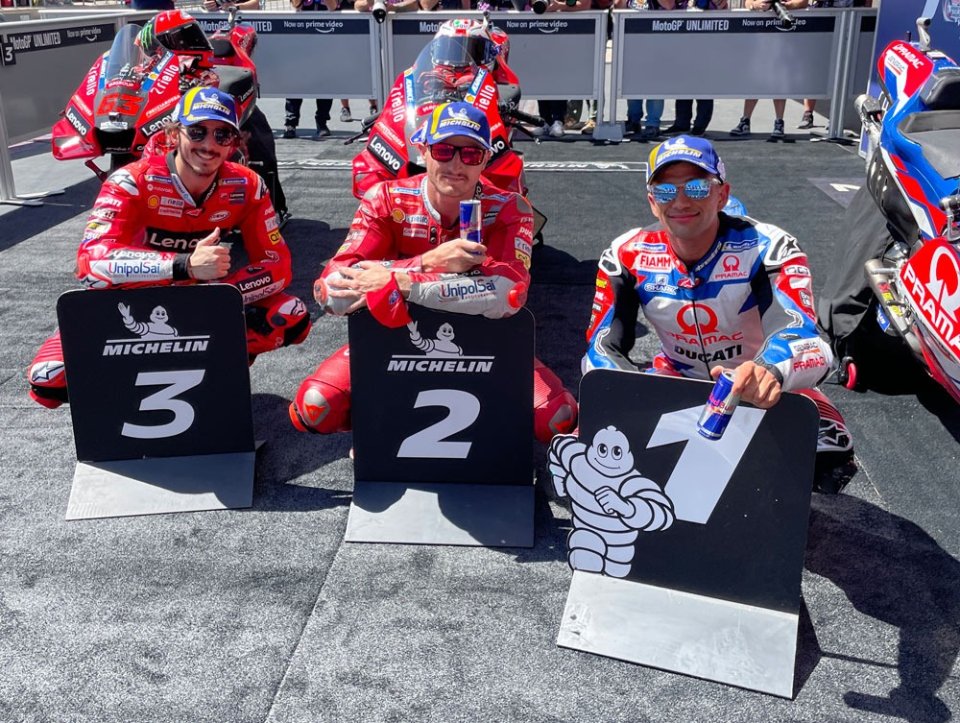 Picture perfect qualifications for Ducati as it conquered the first five positions on the American circuit, with the official Ducati in the first row. But the pole, the second of this season, belongs to Jorge Martin, who also reached a new, long-unbeaten circuit record with a time of 2'02'039.

After your fall in the FP3, you recuperated immediately. You had to fight for Q1, and you emerged winner. Then, in Q2, you conquered the pole, also reaching a new record. Would you define this your best career pole after this succession of events?
”I can’t say if it was my best pole,” Jorge Martin said. “I sincerely didn't expect it after that fall during the FP3. I was frustrated, and I wasn’t getting the times. In Q1, I wasn’t fully confident, but I was able to advance in Q2, and I was able to make the most of my teammate, Johann Zarco’s, slipstream. Thanks to that, I was able to beat the previous record of the circuit, so I’m satisfied and anxious to be able to put myself to the test in the race tomorrow.”

Are you surrounded by Ducatis that are just as fast? Qhat are your expectations for tomorrow?
”It won’t  be easy. I expect a very demanding race on a physical level. The race pace is very fast for everyone. Mine is probably not the best, but I’m confident that I can do well. Competing with other Ducatis will probably be an advantage, because they’re bikes I'm familiar with. We had some problems on the straights, so tomorrow we’ll try to find a solution before the race. But, on the whole, I’m confident that I can get good results."

You seem to have problems on the straights. What do you think is the cause?
”It's something we're still working on, but I'm confident we'll figure it out. The work tomorrow before the race will be crucial in trying to solve that problem too."

What went through your head after that fall in the FP3 to then be able get to get the pole?
"At first, my morale was low. I was at the bottom of the ranking, and things weren’t going well for qualifying. But, in Q1, we managed to solve some problems, and everything started to go in the right direction. After making the best time in Q1 and moving on to Q2, I just gave it my all. It’s a matter of self confidence. It’s proof that you need to want something in order to get it."