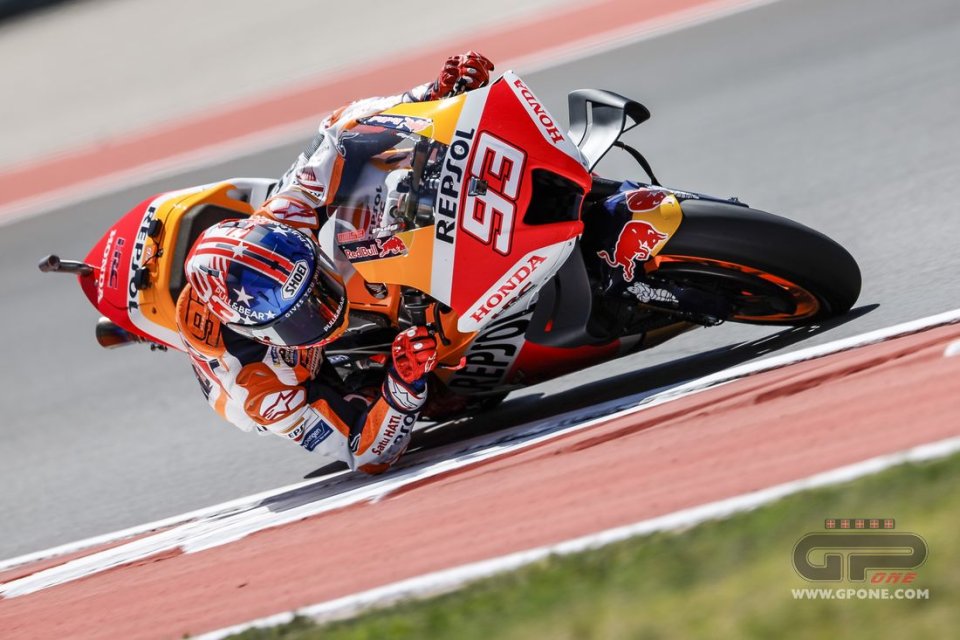 Marc is back! And he’s done it his own way: on the attack, asap. After everything he went through, after his fall in Indonesia, it wasn’t easy, but the rider from Spain isn’t the kind of guy that gets intimidated by challenges, especially in "his" Austin.

"It was a difficult day, especially to start," he said. "I tried to do it aggressively by attacking, because it was the best way to forget the last two weeks and the fall. That's what I did, and when I saw I was fast, I relaxed. I practically hardly touched the bike. I used the set-up of the first GPs, and tomorrow I’ll start working for the race. Today was a day for myself. I focused only on regaining confidence.”

He’s fast, as we can see by his 6th time in the rankings, but Marquez has also thought about not wasting energy.

“Am I tired? Look at my pace, and you’ll have your answer,”  he said jokingly. “I rode slowly, and pushed for only one lap. It’s the only way I can survive for the whole weekend. But I know that I’ll have to push tomorrow afternoon, work for the race but, at the same time, I want to be fresh for Sunday. That's why I only used today to understand and collect information."

This doesn’t mean that Marquez will use this Grand Prix as a sort of test.

"I'm here to compete, not to do laps," he stressed. "I also told my team not to ask me anything about my condition. If there are problems, I’ll tell them. So we worked as usual."

Marc knows tomorrow will be an important day.

"I'm not the fastest right now,”  he admitted. “It was already difficult last year in qualifying, because all the Ducatis are fast in the flying lap, and I know that the times will drop tomorrow. My goal will be to try to be in the first two rows. I’d give anything to succeed."

Marquez is also trying to continue to adapt the new RC213V to his riding style.

"The front of the Honda 2022 is one of the weaknesses for my riding style. The area where I struggle the most,” he said. “I also had warnings today that I didn’t understand well. The team already has some ideas, and I trust them. And Honda is working towards the next races.”