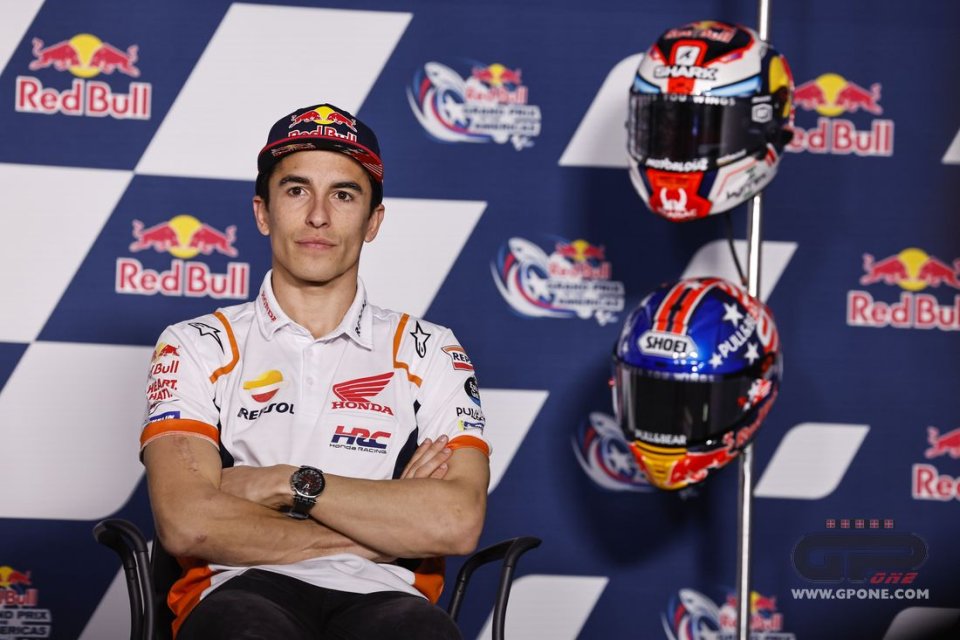 Marc Marquez is back on the bike, but this time it was hard for him to get back on. The terrible accident in the warm up of the Indonesian GP not only affected his body, but also his mind. Although the champion from Cervara has often been compared to a Martian, in the end he is human and in recent weeks he has had to confront his limitations.

"It was a really hard week after the Indonesian Grand Prix - he said - For Argentina I was very close to coming, but I didn’t feel motivated to take that risk in Argentina and I didn’t want to. I discussed it with the doctors and we decided to stay home and relax. I started to train again in a good way and this week I had another doctor check and the vision was fixed. Of course I arrive not in the best way, but we will try to do a great FP1 and then from that point start our weekend."

Clearly, being in Austin, everyone thinks he can win.

“The approach for this weekend cannot be the victory even because I don’t feel I can do it. I just want to build up the confidence again. I didn’t even feel motivated to come to Argentina and race and I preferred to stay calm. Now it’s just trying to build the confidence again, and if I don’t feel it then don’t push because then an unexpected crash will arrive like Indonesia. The reason I think was the different casing on the rear that we didn’t adapt well or didn’t change well the set-up to that casing.”

"I don't remember much of the accident, but I saw the video – he replied - It’s true that Indonesia was the worst GP of my career. I crashed too many times, there were crashes I didn’t understand and the warm-up crash I was with a new rear tyre and I just had the highside. But anyway, it’s the past and now is time to build again that confidence and build again the process.  It was really hard in Indonesia but it was harder during that next week. Lucky for me I’m here. Of course, compared to Qatar, my physical condition I feel a bit better, but it’s true that with confidence I feel much worse. This is something that is obvious about a weekend after another injury. Especially when it affects the vision which is something that makes me scared.”

Marquez did not hide the fact that he was afraid.

“I got scared about a lot of things - he continued - I started to feel something strange after the first flight from Mandalika and it was difficult, I thought I would be stopped for 3 months again. It is something that scares you, also because it is difficult to manage even in everyday life. Then the doctors confirmed to me that the injury was less serious and in the second week I improved day by day. If I am here it is because my passion is greater than my suffering, I will continue on my way to return to fighting for the championship, but it is not that moment yet”.

Marc is also aware that the problem could return at any time.

“After suffering from diplopia twice in 6 months, I asked the doctors about everything, even if the situation would change if I stopped for a year. They told me that the impact was enormous and that I run the same risk this weekend and one year, two years - he explained - It is a problem with a nerve that after a blow moves a little, my weak point. I know there is a risk but I'm here to race, not to talk about injuries ".

These are not words of circumstances, Marc thought about it for a long time this time.

“In the end it's normal, it was my fourth injury in two years - he sighed - Two weeks ago I wasn't even motivated to come here, I just wanted to relax. The people who are close to me, starting with my brother, helped me, pushed me to train and step by step the motivation to return came. When you have an injury you don't want it to happen again, but then it passes. Passion is our fuel ".