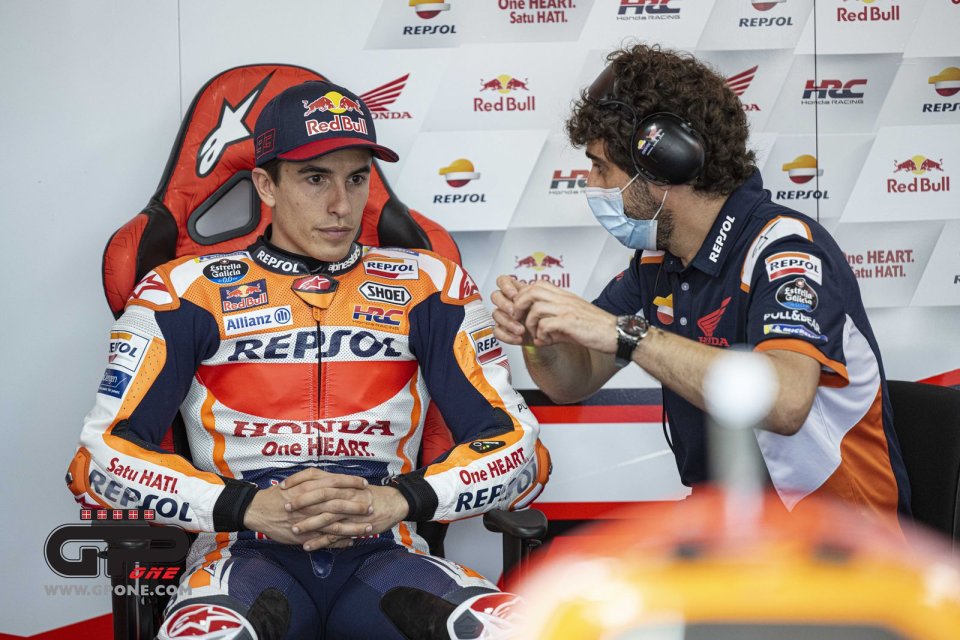 After two falls in the Q1, we still got to see the Marc Marquez we once knew, able to ride and then return to the pit lane while the bike is still sliding in the gravel. But he’ll be starting 14th, thanks to the penalty on Morbidelli ... something he didn't like!

"I would have preferred the last position of the third row. It’s cleaner,”  he explained. “While, on the 14th, the area is dirty. We had several unexpected problems, all the Hondas, and suffered a lot. I tried to pass in the Q2, but I wasn't ready and, as for the second fall, I tried to stay inside, but I lost the front."

It looks like  the Honda isn’t adapting well to the new hard Michelins.

"We have to find a way to take advantage of these new tires, because Quartararo did the same times as in the tests, so it’s possible. Unfortunately, we have some problems with the rear and, like I said in Qatar, I don't have full confidence with the front, and I can't push any more ... However, we’re better than my 14th position. We tried to correct the problems with the front, and I got confused, and I didn't ride well. Tomorrow we’ll take a step back to find a bike that I’m familiar with."

Some are saying that there’s too much pressure on Marquez. The entire Honda team is counting on his results. Marc denies this.

“I’m not under  the same pressure as in Qatar. Of course, starting from a 14th position, I’ll have to attack. I’ll take risks, not to fight for the podium or a victory, rather to stay in the top ten, but I won’t be able to be patient like in Losail. The problem is that I don't feel at ease anywhere on the circuit, and I fell at turns eleven, twelve, and thirteen ... I figured out the first fall, but not the second, and that makes things a little more difficult. In the morning, I had started to play around a bit, also avoiding some falls. We have to work, step by step. Of course, this is the worst place to start from behind, but we'll try."

Marquez still has to find the ideal solution for the new Honda.

"Like I said before, the bike has improved a lot in the rear ... I tried different set-ups. We have to do it. We have to take some risks. In the race, I’ll need to attack immediately. That’s why I’ll start with a soft rear, then we’ll see how far it’ll take me. From the middle of the race onwards, I’ll have little grip. We’ll still try the medium in the warm-up."

It only takes a few tenths to start from more than half way down in the group.

"Yes. Starting from 2019 onwards, we’ve all been really close. In the free practice session, I lost a tenth and a half, and that's why I didn't get to the Q2. Before, when you had a bad day, you could end up in the third or fourth row. Today, you go directly to the fifth."

A position that isn't ideal if it rains.

"I prefer rain in this situation, but I know that dry conditions are better for the show. I think we could have a good race. I always believe in myself, today like always."