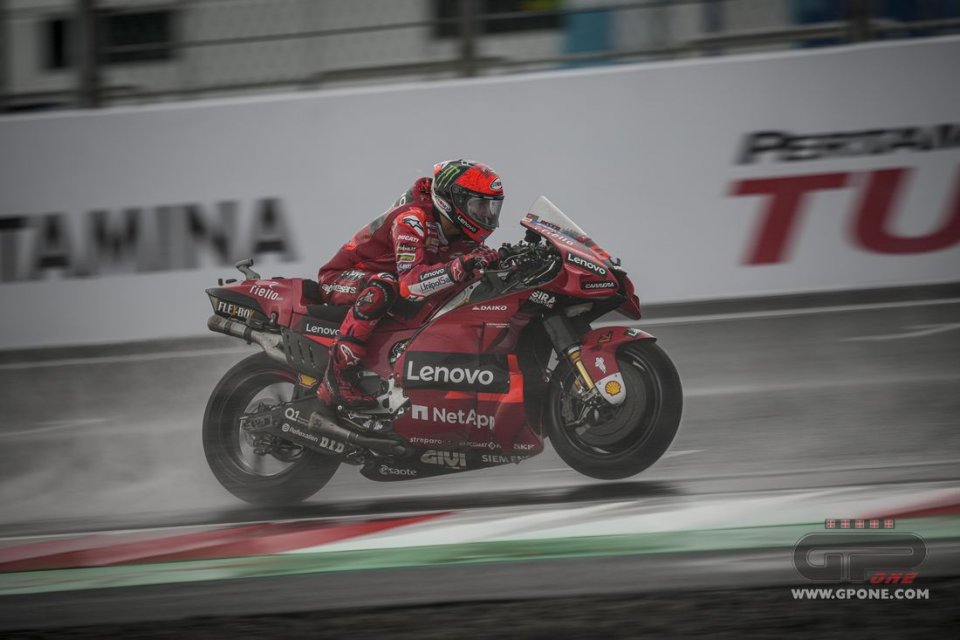 One point in two races, Pecco Bagnaia’s start this season can only be defined as disastrous. Today he sank without trace in the Mandalika rain, finishing 15th and with a mood darker than the sky above the circuit. The Ducati rider tried to find an explanation for what happened but failed.

"I too have many questions about my race, I have to understand a lot of things about what didn't work - he spread his arms wide - In the wet I had good sensations both in the tests in Malaysia and here in the free practice sessions, while today I struggled straight away, already when I braked for the first time I felt that there was something strange ”.

"I struggled to stay upright, I was constantly losing the front. On TV you saw the bike lock under braking, but there were many others, the front kept closing even in the middle of the corner. And to say that in the warm up I felt very competitive on the dry with used tires. After the winter tests I had lost confidence but this morning I had found it again, I felt ready to fight for the win against Quartararo. Instead the final result was the opposite, I find it difficult to think about this race ".

Did the GP22 struggle in the wet?

“Today the problem was not the bike. The Ducati in the wet has always been incredible, but today I was struggling with the front, which is usually its strong point. Let's wait before reaching conclusions, we're only in the second race, right now I have to reset and think positively, we can't always be so unlucky ”.

Do the tires have anything to do with it?

“I'm not saying it was a tire problem, but for some reason they didn't work as well as I would have liked. Usually with the Ducati in the wet I can clearly feel the limit with the front, I'm sensitive in this sense, but today it didn't happen. The wheel kept locking without me braking hard, in fact I was just trying to manage the situation, I was at the limit because I didn't understand what was happening ”.

Did you use a different setup?

"It wasn't that either, in the wet we always use the same set-up because there's never time to work on it. We know that is fine ”.

How do you feel after these two GPs?

“Right now we need to analyze what happened and try to see the positive side. When I saw it started raining today I felt calm because I knew that I am usually strong in those conditions. Instead I struggled and I don't understand why. Until this morning I felt competitive, but the result was the opposite. I don't want to say anything else and make someone nervous who then starts writing on social media from home and breaks my balls (laughs) Sometimes I feel like I'm at work and there is someone who breaks my balls all day ".

How do you get out of this situation?

“In the end I'm human, it's bad when you read negative comments about yourself. I already know that I will think about what happened today for the whole week, but I also know that as soon as I arrive in Argentina in my mind there will only be room to find a way to stay ahead. I'm lucky because at home I will find the right people who will reassure me, my girlfriend and my trainer are very good at this ".

Is it a difficult start to the season like the one in 2021?

"No, last year I had a good start but I was unable to achieve anything, and then I had come from two difficult seasons. This time I had other goals in mind, the idea of ​​fighting for the championship. Unfortunately it went differently from what I expected ”.